Catholicism and the Fruits of Discipline 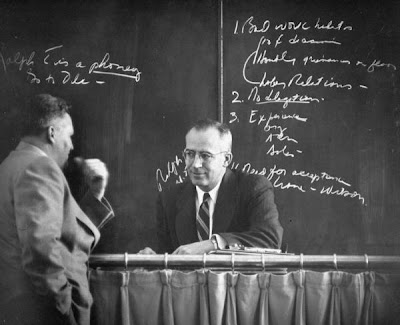 Which teachers in high school made the most positive impact upon you? Which ones brought out the best in you?

There were a few teachers I had in high school who inspired me in different ways. Mrs. Foley was a stickler for proper grammar. Ms. Davidson challenged us to make speeches that persuade people. And Sr. Rita inspired me to find a way to switch out of her class because she only had love for the school jocks.

If you look at your past history with teachers, you would probably have one or two who seemed unreasonably strict at the time but yet pushed you to go beyond what you thought you could do. Those are the teachers who are great - the ones who aren't so much concerned about being a student's "friend" as they are being a guide. A truly great teacher will challenge you to see the world - and yourself, differently.

We learn from those types of teachers. Sometimes we'll have mini-epiphanies while listening to one of their lectures. Some students are so inspired by their commitment to creating a learning environment that after graduation, they pursue teaching as a college major. I obviously didn't go that far, but teaching, to an extent, has always been in my blood. I love to energize a group and share what I've learned with them. I love to see them take new knowledge and come to an understanding of a particular concept. (I teach digital scrapbooking classes and love to see excitement in my students.)

To me, teaching is a combination of love and discipline. A great teacher must love their students but not coddle them. They must train their minds but not break their spirit. It is a difficult task which is why there are so few great teachers. To walk the line between pushing a student beyond mediocre work and being too demanding is an art; and one not appreciated enough in our society as far as I'm concerned.

We live in a soft world. Passivity and an aversion toward challenge is killing our school systems. In the attempt to "level the playing field" for students by lowering the standards for educational excellence; our public school system has churned out truckloads of non-thinking individuals. Take a child's brain of mush and only throw entertainment at him, and he will expect to be entertained the rest of his life; never examining his own potential for greatness.

The Catholic Church has never been about ease. School uniforms in Catholic high schools reflected a group in training. Perseverance through suffering, denial of self, and a demand to be your very best was instilled in many Catholic students. It's not surprising that some of these very same students went on to become leaders in their fields. Leadership demands discipline.

An anthropologist recently discovered a truth many of us already knew: Martyrs make religion. In other words, when someone is willing to pay the ultimate price for their beliefs, such as dying for them, others pay attention. We as Catholics know that when the early Church was being persecuted, new believers were being born. Those who watched the Christians bravely embrace their circumstance knew that anything worth dying for - was worth living for.

These words from the article about the anthropologist caught my eye:

If Henrich is right, churches that liberalise their behavioural codes may be sabotaging themselves by reducing their followers' commitment, New Scientist comments, adding that this may explain why strict evangelical Christian churches are expanding in the US at the expense of mainstream denominations.

There is something in us that instinctively knows it is good to be stretched. The athlete pushes their endurance levels in order to fulfill their greatest potential. The artist disciplines herself by spending years studying the Old Masters so she will be able to create her own masterpiece someday. The violinist spends hours disciplining his hands and ears so he can perfectly deliver a stunning rendition of a musical piece.

And the Catholic Church? She instills in us the discipline so that eventually, we may become saints.

Liberalism does nothing for the human spirit. It is weak, with little demand or challenge in its statutes. Again, we know deep down inside that there is a justice when one is rewarded for their own efforts and an injustice when those rewards are taken away and given to one who hasn't earned them. Liberalism does not produce greatness, but dependence.

And this is why I foresee the Catholic Church growing, surprising even her harshest critics. They will be unable to deny the sincerity of those who reject the "easy way," although I suspect they'll find a way to punish it all the same. Those who believe in the truth and economy of discipline, have already received their reward, whether it's a well-paying job or recognition in their field of expertise. Little effort produces only mediocrity.

Catholicism challenges us to resist the temptation to just coast through life. Our Mother Church says, "Stand up straight. Don't talk with your mouth full. Study your Bible. Know your catechism. Pray your rosary. Love your enemies and forgive them. And don't forget to go to Mass."

Because as every good parent knows, you have to train the child to walk before they can fly.

At the expense of being silly...
"AMEN!" to that!
Just found your blog.
Welcome back.
Pax Christi.