The Left's Schizophrenic Battle With Self 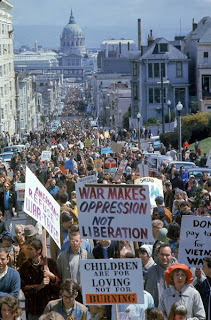 (Photo courtesy of LIFE, Location: San Francisco, California, Date taken: April 1967, Photographer: Ralph Crane)
Earlier this morning, I read a post by the powerfully prolific Robert Stacy McCain, that exposed a dilemma of many progressives. However, because leftists are masters of self-delusion and obfuscation, it's no surprise they're unable to see the irony of their current beliefs.
McCain referenced an essay by Mark Lilla in the New York Review of Books. I'll use the same quote by Lilla:

[W]e need to see [the Tea Party movement] as a manifestation of deeper social and even psychological changes that the country has undergone in the past half-century. Quite apart from the movement’s effect on the balance of party power, which should be short-lived, it has given us a new political type: the antipolitical Jacobin. The new Jacobins have two classic American traits that have grown much more pronounced in recent decades: blanket distrust of institutions and an astonishing—and unwarranted—confidence in the self. They are apocalyptic pessimists about public life and childlike optimists swaddled in self-esteem when it comes to their own powers.

He had me at "unwarranted confidence in the self" and "childlike optimists swaddled in self-esteem."
How old is this guy? From a quick search, it seems as though Mr. Lilla is about fifty-three. Perhaps he's developing Alzheimer's or did too many drugs in the seventies but suffice it to say - our country was built upon the concepts of self-determination and independence. And in the sixties, this little idea called "self-actualization" came into play. As a matter of fact, I'm in the midst of watching a BBC documentary called "A Century of the Self." I find it fascinating but also tragic; for an obsession with self can often lead to an unbalanced life and in its extreme, mental illness.
I was stunned to find one portion of this documentary tell the story of how nuns were duped into allowing radical psychotherapists test out their harebrained idea of "personal liberation." (As the documentary stated: "The convent, anxious to appear modern, agreed to the experiment.") The result?
The nuns decided to discard their habits for ordinary clothes. And the psychotherapists found that they had "unleashed a sexual energy." (I have no idea who was driving the bus at this point but I think it's safe to say their bishop had no idea what was going on.) One nun seduced one of her classmates, and then seduced the mistress of novices. Within a year, 300 nuns (more than half of the convent), petitioned the Vatican to be released from their vows. Six months later, the convent closed its doors. All that was left was a small group of nuns and they had become radical lesbian nuns. The rest gave up the religious life. (One of the psychotherapists, when asked about the nuns giving up religious life, said, "Yes. They became persons." How amazingly ignorant.)
That's what can happen when "personal liberation" and an elevation of self meets religion. And that entire deconstruction of morals was the fruit of the fatalistic sixties. From the end of this portion of the documentary:

Self exploration was spreading rapidly in America. Encounter groups became the center of what was seen as a radical alternative culture, based on the development of the self, free of a corrupt capitalistic culture.

I highlighted the schizophrenic battle cry, the one sounded by many leftists during their youth, which was: Capitalism is bad because it "forces" a person to adhere to a rigid set of rules and has no compassion or concern for others. But the development of self? Why that was a higher ideal! Why not do whatever made one "feel good?" Sex, drugs, experimentation of any kind - all was perfectly acceptable and even encouraged by those who claimed to be "personally liberated."
Now we fast-forward to today, where Marxists walk the halls of the White House and Communists wear suits. Suddenly, according to the Mark Lilly's of the world, self-esteem is bad. Forget the fact that this is what has been spoon-fed to our children over the past forty years. The leftists now want everyone to believe that encounter groups and "empowerment" sessions were helpful to a point, but realized the error of their ways.
Quite frankly, they went too far. Now the country is too self-aware and independent for their taste. Now you have the pesky little problem of people running around, challenging the government to leave them alone and quit interfering with their lives. If I didn't know any better, I'd think I was living in a 60's redux with Holly shaking her fist at "The Man" in the Oval Office, raking him over the coals. But I suppose that kind of umbrage was fine for Holly as long as she was smoking dope and sleeping her way through the bands at Woodstock.
Now that we have responsible taxpayers (those who already have given years of productivity to our country), questioning the government and claiming self-sufficiency - suddenly they're the bad guys. The Tea Party folks are "expressing" their personal liberation mentality but gosh darnit, that just doesn't sit well with the hippie generation that now is grown up and desperate to control everything.
Ironic, isn't it?
by Mary Rose at 5:55 PM

"nuns were duped into allowing radical psychotherapists test out their harebrained idea of "personal liberation."

I bet you're referring to this:

a fascinating article if you have the time.