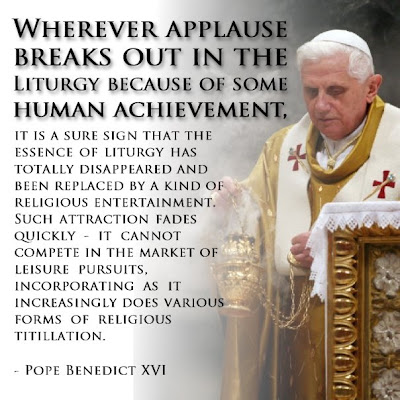 I will be buying this book very soon. I so love our Holy Father! I found part of this quote awhile ago and created the image you see on the side.

Liturgical Dancing
Dancing is not a form of expression for the Christian liturgy. In about the third century, there was an attempt in certain Gnostic-Docetic circles to introduce it into the liturgy. For these people, the Crucifixion was only an appearance. Before the Passion, Christ had abandoned the body that in any case he had never really assumed. Dancing could take the place of the liturgy of the Cross, because, after all, the Cross was only an appearance. The cultic dances of the different religions have different purposes--incantation, imitative magic, mystical ecstasy--none of which is compatible with the essential purpose of the liturgy of the "reasonable sacrifice". It is totally absurd to try to make the liturgy "attractive" by introducing dancing pantomimes (wherever possible performed by professional dance troupes), which frequently (and rightly, from the professionals' point of view) end with applause. Wherever applause breaks out in the liturgy because of some human achievement, it is a sure sign that the essence of liturgy has totally disappeared and been replaced by a kind of religious entertainment. Such attractiveness fades quickly--it cannot compete in the market of leisure pursuits, incorporating as it increasingly does various forms of religious titillation. I myself have experienced the replacing of the penitential rite by a dance performance, which, needless to say, received a round of applause. Could there be anything farther removed from true penitence? Liturgy can only attract people when it looks, not at itself, but at God, when it allows him to enter and act. Then something truly unique happens, beyond competition, and people have a sense that more has taken place than a recreational activity. None of the Christian rites includes dancing. (The Spirit of the Liturgy, pp 198-9)

Email ThisBlogThis!Share to TwitterShare to FacebookShare to Pinterest
Labels: Holy Sacrifice of the Mass, Pope Benedict XVI, Sacred Music, What I Love About Catholicism

Re Liturgical dancing, I think Dorothy said it best:

I like B16: he says something, and I understand it.

I have some more thoughts I'll be sharing on dancing. I also really like our Pope because he expresses truth so beautifully. He is deep, but I don't feel lost when I read him. I really love the quotes I found on this page. Really wonderful stuff.

Thank you so much for this quotation. Priests here ask for applause (for other people, not them - mostly for the congregation) all the time. I never applaud because I feel it's inappropriate. Since it's so common, though, I was beginning to wonder whether I was being too uptight, but this makes me feel better.

I actually have The Spirit of the Liturgy but haven't read it yet... I think making any sort of mark on books is something akin to sacrilege, but this passage merits highlighting.

I couldnt agree more! I hope you dont mind but Im copying your image to put on my pope blog. (With a link of course:))

I bought The Spirit of the Liturgy a couple of years ago, and I highly recommend it. its a great little book, the kind you don't just read once. or maybe thats just me:)

Great image, Mary Rose. I like that quote; it was actually printed in our parish bulletin some years ago. :) And hey, Fr. Z linked you-- you've hit the big time!

Thanks to all for their comments! I've been busy but realized I had some comments waiting to be moderated. So glad the image touched you and yes, feel free to use it!

Rachel, you're so funny! I had no idea until I saw the post about applause. My first thought was, "Cool! Fr. Z has something to say about it, too!" Imagine my surprise when I saw the link to my site!

Yes, I got the biggest spike in traffic in the history of this blog! Over 600 folks checked it out. I'm still stunned!