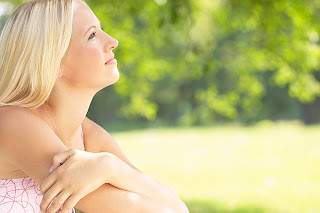 Since Gov. Sarah Palin has exploded onto the scene, I've been watching with great interest the response by feminists. Not surprisingly, they loathe her. As I've sifted through possible reasons why this is, I've been reminded of how Catholicism has shaped my identity as a woman.

When I was a young girl, one of the first lessons I remember learning at the feet of the good sisters was personal responsibility. I was responsible for my own choices, which led to the state of my mortal soul. No matter how "popular" a certain behavior may have been from other children my age, I had to examine it through the lens of Catholic doctrine - that I was created by God to honor and praise Him, receive His Son and His sacrifice, to honor His mother, and through the power of the Holy Spirit, lead the life of a saint. High goals, indeed.

I learned independence from those years in Catholic schools. There is a toughness about Catholic schools - or at least it existed back then, that reminded me that whining never led to anything good. If I wanted to accomplish something, then by all means get on with it and quit waiting for someone else to do it for you.

This is why I had the reaction I had when I discovered feminism. There was a deep inner core within that balked at the idea of having the government do anything for me. Why would I need them? It was my life and if I couldn't accomplish something on my own, then I had only myself to blame. In my eyes, it was akin to finding love. Who wants someone to love them because the other person felt "obligated" to do so? Where is the joy in that? There is none because we all understand what free will means and to me, feminism was never about freedom but control.

I have a very low threshold for controlling personalities. As soon as some famous feminist steps up to a mic on television and tells me why I "need" the feminist movement, I'm looking for the nearest sneaker to throw at the screen. Any good nun worth her salt in the fifties would have told that woman that we as Catholics don't "need" anyone except God. Those types of nuns taught me the meaning of suffering, self-sacrifice, love, grace, forgiveness, and a rock-solid aversion toward whining. If there is one thing that drives me crazy, it's the constant stream of whining I hear from radical feminism. That's what it sounds like to me. One big "How Dare You!" whinefest.

This is why I feel there has been a visceral response to Gov. Sarah Palin. I could almost hear the chorus of many other independently-thinking women out there shouting, "Finally! A woman like me! A woman who understands she doesn't need some rabble-rousing bitter group of women to make her life easier!" Even though Gov. Sarah Palin left the Catholic church, I suspect the seeds that were planted within her have now borne the audacious fruit we are all witnessing. She didn't need legislation in order for her to walk into that school and take charge of the PTA. She's a natural leader - but a leader with a difference. She's not carrying that huge 5-ton chip on her shoulder that says she lives in an unfair world and needs a pack of barking dogs to keep the mean men at bay.

Most of my girlfriends are Sarah Palin types. They raise their children and brook no arguments from them. The Catholic women are a special breed and I hold our Blessed Virgin Mary responsible. How can a Catholic woman not look to Mary and treat her as the perfect role model? And what did Mary do? She listened. She trusted. She obeyed.

And this is where Catholic women run into trouble with the feminists. Their trust isn't in the government, it's in God. As Christians, we are are exhorted constantly to trust in God. We have the stories of the saints who did trust in God and God accomplished wondrous things through their lives. That's the kind of trust we want to have, not in some shrill harpie demanding that we shelve religion because Government with the Big G is going to save us all.

Gov. Sarah Palin knows this is not true and it is absolutely driving the feminists wild. She isn't playing their game - never has and hopefully never will. They are almost foaming at the mouth over her supposed "betrayal" of them, and make no mistake about it - they are about as livid as a scalded cat that she isn't playing for their team.

One of the more amusing criticisms I've read about Palin is that she was too comfortable with the political speech, that for all her words about not being an "insider," she sure was acting like one. I had to laugh. Gov. Sarah Palin has managed to do something that is extraordinary as it is rare. She gave a speech that was wickedly smart in its political prowess but yet did so in such a real way that everyone could imagine having a beer with her while doing it. She connected with the average person who has felt disconnected from the government for many years and this terrifies her opposition. So of course they have to throw everything at her including the kitchen sink.

I keep coming back to the concept of suffering. Catholicism is the only religion I know that not only makes room to understand suffering in our lives, but seeks to embrace it. This is a quandary for feminism. They see suffering as something to be avoided at all costs and if it can't be bullied into submission, then let the judges change the scenery. Suffering needs to end, in their eyes, because it has no purpose in their self-centered world.

But in a Catholic woman's world, suffering has a far greater purpose. It purifies her. Cleanses her. Strengthens her so in the end, together with God she emerges a more compassionate person because of it. A woman usually has that "giving gene" that opens wide to share herself with her family and the world, but a woman who has submitted to God, including suffering, is indeed a force to be reckoned with. Feminism doesn't know what to do with such women. These steely women infuriate feminists because they see before them what a real woman should look like, and the hard-core feminists aren't anywhere near looking like that.

The feminists see a strong woman, a smart woman, a loving woman who doesn't repel men, a woman who understands what being a woman is all about and doesn't see it as being a handicap; and they simply are stunned. They see all of their goals achieved but not by the path they espouse. Either they can't understand or they refuse to accept that true independence for women isn't something that comes from without, but from within. It isn't a matter of banging on City Hall's door, demanding to be recognized and served. It's a matter of closing the door to the world, surrendering to something bigger than self, and asking for grace.

The feminists will be trying to throw much at Gov. Sarah Palin. In their efforts, they are exposing themselves to be the ugly hateful women that most other women avoid. As I told my father years ago when I woke up from the nightmare of following feminism - I have yet to meet a happy radical feminist.

I still stand by that comment today. And if anything, I think it was easy to see that overall - Gov. Sarah Palin is a happy woman. And I couldn't be more happy myself to see it.
by Mary Rose at 8:00 AM

Email ThisBlogThis!Share to TwitterShare to FacebookShare to Pinterest
Labels: Politics, Thoughts on Women, What I Love About Catholicism

Great post! Yes, finally, a strong conservative woman with a commitment to her Christian faith and all the normal people in America. Regardless of earthly church affiliation, she is someone we can all look to now, not that we put faith in any human but in Christ only for spiritual salvation, but to see a leader among us truly be a courageous leader....I'm thankful....

Let's not forget her having had a baby just months ago at the age of 44 and she has a better figure than most teenagers. Trite? Naw! That has the feminists writhing...

...and her husband is cute and attentive. Double whammy.

Jealousy is an ugly emotion.

Mel, yes! You can tell she is a woman of faith. She is also a very wise and skilled leader. I love the word "normal." She is just so doggone normal that it boggles the mind. I feel my reaction shouldn't be this extreme but then I look at how many politicians I've seen over these past few decades who didn't seem to have a "normal" bone in their body. They were all absorbed by the political climate in Washington and forgot their constituents.

Adrienne - right on, right on! Man. I haven't had a baby and still wish my figure looked like hers! You are also spot on about her husband. What a cutie! Yes, I noticed. (heheh) One of the things I loved was when Sarah (it's hard to call her Governor...she is that down to earth!) said about her husband, "And he's still my guy..." I mean - you just knew it wasn't B.S. she was throwing around. She obviously is proud of her husband and adores him.

Yessireebob. Jealousy is ugly and the feminists are full of ugly!

I have never in my life felt like I could relate to a female politician but I do now.

Come to think of it, I've never met a happy feminist either.

Gov Palin is as she appears. The problems she is facing is about upsetting the "status quo" in Alaska and they are "hell bent" on getting their revenge.

In Alaska, most of us just laugh at the "circus". But I do have to admit, the liberal media is going to loose alot this year after this is all done....No matter if she wins or loses.

Let me know if you have any questions. Meg :)