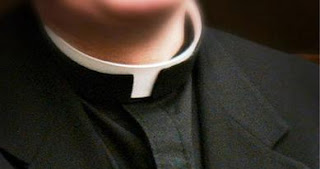 I have really started to love priests again. And it wasn't as though I "hated" them at any point in my life. Even in the midst of the sexual abuse cases, I never looked at the whole lot of them and said, "Oooohhh, those priests....they should be done away with!" I knew there were some very disturbed men but as soon as I heard Pope Benedict's thoughts about it, my opinion was beautifully crystallized: The priests who did such horrible things never loved Jesus Christ enough to allow Him Lordship over every part of their life.

My feelings about priests dissolved shortly after I left the Catholic church. They became irrelevant to me and I admit I thought they were a bit backward. Not as "aware" as my newly discovered non-denominational leaders. Then there were a few Jesuit intellectuals I knew, whom I thought of as "fake" priests. They were all about philosophy but their disdain for the average man struck me as snobbish and small-hearted. They didn't even remotely remind me of Jesus.

There are good priests and bad priests, just as there are good doctors and bad doctors. When someone runs across a bad doctor, it doesn't mean they suddenly think they'll never use another one again. We all know there are times in our lives when we need doctors. We need priests and perhaps more so than ever before. We live in a very turbulent world. Priests help by not only guiding people to the truth but by providing a firm dependability that is not seen in any other Christian denomination. There are many pastors but very few stay within the same framework of leadership, serving a congregation day and and day out - for decades. Priests do.

There are different kinds of priests. I don't think I realized how many "types" there were until I came back. Not all priests have the pastoral gift. (And some of you may be reading this while saying, "Boy...she's got that right. Take my priest, for example. Please. Take him.") Some priests are called to travel and speak, such as Fr. John Corapi. Some are called to teach within schools. Some are called to minister within government and law. Some are called to close themselves off to the world and lead a contemplative life.

The ones who are called to serve within a parish are, in my opinion, those who need our prayers the most. It is a very exhausting thing to provide spiritual leadership. Many church members refuse to grow up and constantly badger a priest over every possible infraction they see occurring in mostly inconsequential issues. Then there are the needy women who have no men who will listen to them so they cry on the shoulder of a priest. There are the small cliques (often called committees) who feel it is their duty to make sure the priest is going in the right direction and will tighten their leash if he strays. And there are the naysayers, who critically evaluate every church service in order to write lengthy letters to "straighten out" their priest.

I didn't even include the myriad of duties a priest has such as entertaining visitors, teaching in the parish's school, visiting the sick and praying over them, conducting weddings and funerals, overseeing the budget, attending meetings, and - oh, yes, celebrating Mass each day. I know I left out some things.

When I returned, I realized there was a divide between priests who disagreed with the Pope on almost every major issue and those who trusted His Holiness, for the most part, implicitly. I knew there were priests who supported the ordination of women as priests and those who did not. But still, in the midst of all these disagreements, I started to grow in my respect for them. You can take the most liberal priest out there, but I will still admire him for one thing: he has dedicated his life to serving others. The way they serve may give me pause, but they are serving nonetheless.

Yesterday was "Priesthood Appreciation Sunday." We had a cake for our parish priest and I was touched by the wording of the plaque he received:

In recognition of your dedication, enthusiasm, and commitment of excellence in living out your priestly ministry to serve the people of the Catholic Church, the poor and neglected, and all those who come to you with a heart filled with the life of Christ or those desiring to give their hearts to our Lord Jesus Christ.

Some priests are gruff. Some are kind. Some are generous with their time. Some are not. But before we quickly judge, think about all they have given up in order to be available to you. It's an amazing sacrifice. I know I don't think of it often enough but I will seek to do so more. The least we can do is pray for them. It's a tough job and they need God to do it.

Thank you, if you are a priest and happen to be reading. Thank you for being there for the sick and dying, those who are lost, and those like me - who left home and finally returned. God bless you richly over, and over, and over again.
by Mary Rose at 4:57 AM

I echo your thoughts Mary Rose!
Since I have become much more "traditional" in my Catholic faith, I have deveoped an amazing respect for the priesthood. I think once you realize the significance of what the priest is doing at Mass- and Who he is representing- you see them in a much different light.
I pray daily for our parish priests and for all priests and seminarians. I think it has got to be one of the hardest "jobs" in the world.