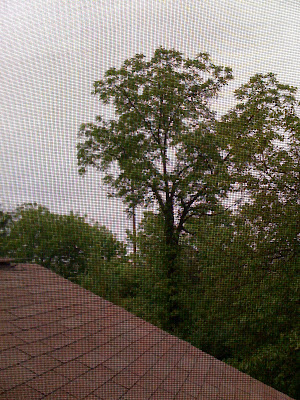 I've always loved gazing out a window.
In our home, we have a few windows but my favorite is the one pictured. It is from the second bedroom and looks out toward the trees in the back. But what I love is the shape of the window. It's narrow, but tall. As I sit at my desk (placed right alongside the window), I can look to the side and see the tall trees and lovely expanse of the sky. The trees attract all types of birds and I love having the window wide open so I can hear them sing. (Although one doesn't quite sing but almost croaks. Weird.)
It is my favorite thing to do in the mornings -- to watch the sunrise, to hear the birds sing, to enjoy an early visit with the new day. I am always filled with hope in the morning.
I think I get my love of looking out windows from my mother. I can remember when I was younger, coming home and seeing my mother talking on the phone, looking out the window, most likely watching for my brother or I to return from school. But it was a common sight that followed into my adulthood. She would seem to be looking, observing, watching. And now I find myself doing the same.
My husband gently chides me at times for peering out our windows to watch what's going on outside with our neighbors. He's the sort that thinks "it's none of our business." I never imagined myself to be the nosy "Gladys Kravitz" from the TV show Bewitched, who thought it was her business to prove to everyone something strange was going on in the Stephens' home. But I like knowing my surroundings, knowing bits and pieces about my neighbors that most likely I wouldn't otherwise. Few neighbors seem to visit with each other anymore, everyone is too busy. So I try to grab a few tidbits from sly, secret glances out the windows.
I know the father who loves his little girl so much that she waited in the truck before her school bus came and then he got out and gave her a little hug before she dashed off to board it. I know the young boys who all live together and how they like to invite their friends over and listen to rock music. I know the woman next door who has a strange son who doesn't seem to be quite right but walks her dog.
One time, we had a neighbor, Bill, who would talk to us. Maybe it was more talk at us, but he was friendly enough and I felt for him. I could tell he was very lonely so I didn't mind talking to him a little bit before I headed inside or to whatever the current destination was at the moment. One day, I returned home from work and as I walked toward our apartment, I saw two police officers outside of his place. I greeted the officers but wondered (of course) about their purpose for being there. I was a little worried.
I spent the next hour or so peeking out from the blinds as I watched various people come and go from the apartment. Finally, a long vehicle came and went into the apartment with a gurney. I gasped as I watched them wheel it out later with a body bag on top. I was thinking it may have been an intruder and perhaps Bill defended himself. Unfortunately, that wasn't the case. I discovered through the maintenance man that Bill had committed suicide. I later ran into his brother and sister-in-law cleaning out the apartment and expressed my condolences to them. I told them Bill had always been friendly and we had many interesting conversations. His brother thanked me for letting them know and told me Bill had been on anti-depressant medication but stopped taking it. He was told by the doctor and his family that he needed to stay on his medication. He didn't and the brother was still angry that this was the result.
Looking out the window allowed me to experience something important and pay my respects to a life that ended abruptly. I told my husband what I saw and said a prayer for Bill.
One of my favorite things to do is to look at the window at the sky and the trees, with no other sounds around than the birds and occasional lawnmower in the distance. Maybe I like looking at the sky because ultimately, that's where my true home lives. Maybe it's the freedom that nature brings. Or maybe it's because I hope that someday, I'll be in another place above this earth, surrounded and infused with the love of my heavenly Father. My hope remains eternal.
by Mary Rose at 9:06 AM

I'm an architect, and window proportion is lamentably an overlooked part of Postwar house design. Probably 90% of house windows are not tall enough for their width, and it makes houses look too horizontal. There's a theory that buildings should have at least as much vertical character as horizontal (if not more), because humans associate health with standing upright and being ill with lying down.

So it doesn't surprise me that you like your narrow window.

None of which is to say a window can't be too narrow, but it rarely happens.

Wow, that's a very interesting theory about vertical vs. horizontal. (Also very cool that you're an architect!) I love older buildings that have personality. Too many homes are breathed into being within a week. Bleh.

I like the taller, more narrow windows because I love looking at the sky so much. I think those types of windows allow for better light but I love light.

I've been wanting to read Michael Rose' book, "Ugly As Sin: Why They Changed Our Churches from Sacred Places to Meeting Spaces and How We Can Change Them Back Again." (what a title!!) I'd be interested to know your thoughts on church architecture.

I'm not sure if I read that or not. I just bought and have been browsing through:

It ain't cheap, but at least for me it's well worth the $50 just to see my prejudices confirmed in print by someone else.

BTW here's a brief bit about the Golden Mean, a natural and ancient proportion that many architects still use today: