My Heart Is Saddened, But I Understand: Fr. Corapi Leaving Priesthood 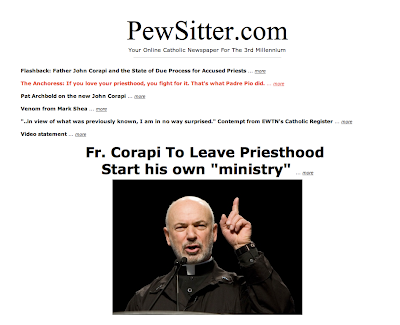 When I first saw the story on Pew Sitter, I immediately gasped. There are almost no words for the injustice that has been foisted upon many good priests and now, it looks like we can add Fr. John Corapi to that unfortunate group.
From the blog, The Black Sheep Dog:

All things change, only God stays the same, so I have to tell you about a major change in my life. I am not going to be involved in public ministry as a priest any longer. There are certain persons in authority in the Church that want me gone, and I shall be gone. I have been guilty of many things in the course of my life, and could easily and justifiably be considered unfit to engage in public ministry as a priest. The present complaint that you have heard about is, as far as I know, from the one person that I can honestly say I did more to help and support than any human being in my entire life. I forgive her and hope only good things for her. I am not going to get into a back and forth or argument with the Church or anyone else about this matter.

There are many reasons why this issue saddens me.
First, there is little recourse a priest has when he has been accused of any wrong-doing. Immediately, in our "post-abuse" culture, the priest seems to be seen as guilty. Whether he is or not doesn't matter. He's been accused and for many, the assumption is "where there's smoke, there's fire."
Second, the Roman Catholic Church is a highly politicized organization, as far as organized religion goes. And within that organization, there is a high amount of scheming, strategery, and spin that would make a hardened Washington D.C. lobbyist blush. It's no surprise to anyone that Fr. Corapi was loathed by many in the Catholic Church because of his traditionalism and stubborn obedience to the Magisterium.
Third, and this is a truth I discovered myself when I was more heavily involved with ministry - the ones who are the enemies of the truth are often sitting right next to you in the pew. When the Bible talks about them, I used to think it referred to unbelievers in the world. Now I think it mostly pertains to other believers in the Church.
Many don't think of themselves as opposed to truth. Some do. But how I've finally found my peace about this is to realize that all of us, especially me, are on a journey toward holiness. That journey takes our entire lifetime.
Fr. Corapi is a man whose heart burns for the truth. If you've heard his homilies and teachings, you can quickly see that he is not about to lie down and let people deny the truth or mock it. At least not on his watch.
I remember one of the things he often would say, "I'm not going to hell for any of you!" And you know what? I felt loved and protected when he said it. Because that's why we need our priests. To tell us the truth. To keep us on the straight and narrow. To let us know when we're on the edge of a cliff and about to fall off of it. They keep us headed toward heaven.
I have no idea what his ministry will look like, but I believe Fr. Corapi is a very gifted man and one way or the other, God is going to continue to use him.
So, a goodbye to you, Fr. Corapi. My heart is breaking but I understand why you're making this decision. All I can say is that there are still going to be plenty of Catholics who will follow you and I'm sure you're going to be preaching the same things to encourage them.
For those who love Fr. Corapi, please add his new blog to your RSS feeds and websites: The Black Sheep Dog. God bless you.
by Mary Rose at 11:34 AM

I only hope that the public outcry about this will force the Cathollic Church to change its policies in how they deal with these situations. Let's have justice and mercy for the priests, and treat them as fairly as possible. It's time for change.

Mary, I had just heard this news today and I'm deeply saddened. He was one to speak the truth firmly and boldly yet with love. He was not one to back down from the truth. I can't image Our Lady who brought him to her son many years ago, will allow him to leave his calling.

My heart goes out to all of our priests out there who find themselves falsely accused and who find themselves facing accusers when they have no obvious "backing" However, I must admit as priests, especially a priest in a religious community there is a vow of obedience. Christ suffered and was falsely accused and yet he trusted and put it all in the hands of the father. My only sadness is that father Corapi did not trust. I sure hope that other catholic do not follow his lead because obedience and trust in the Lord is not only for when the good times roll but specifically when we find ourselves in a trial.

Prayers for him,
Hopeful

As much as I would like to agree with you I can not. The situation with John Corapi is horrible, BUT the response of Fr. Corapi is wrong. He is choosing to not be obedient!He took a vow of obedience. Right, wrong or indifferent he abandoned his priestly life and has turned his back on the Church he proclaimed to love!