Favorite Rosary Meme and My Story 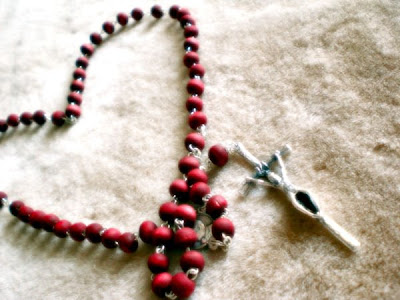 Oh, that Adrienne! How I love her. She has saved me from obsessing over Twitter and she's exactly right. I needed something to snap me out of that drivel and this meme is perfect! This meme is special because it gives me the opportunity to share why this rosary means so much to me.

My first cousin, Andrea, was able to travel to Italy for an extended college exchange program. While there, she visited the Vatican and bought several rosaries, blessed by Pope John Paul. This particular rosary is made up of wooden beads, in a deep rose color. They are supposedly created from compressed rose petals and smelled like roses when I first opened the plastic container.

When my mother passed away in March 2007, I asked my father if I could have this rosary. (He also was given a rosary by my cousin, but he placed it in the coffin during the visitation hours. He asked for it back but somehow, the funeral home forgot. The rosary is now buried with my mother while I have the other one.) He quickly said yes and I placed it in my purse. Now remember - at this point I had no thought or desire of returning to the Catholic church, let alone any desire to pray the rosary. It was just something I knew my mother loved and a memento of her love for "trinkets." (Yes, that was the way I looked at it during that time.)

My father later said he knew it was a good sign when I asked for the rosary. I didn't use it right away, but it was in my purse, a loving reminder of my mother and her devotion to her faith. During this past February, my sister-in-law's father passed away. For some reason, I felt a strong insistence within to pray the rosary for her and her family. They aren't Catholic, but I felt as though I should pray it for them.

My prayer life at one time had been robust and rich. But at that time, it was as scrawny as a malnourished child. Praying the rosary took a little effort and concentration. It provided a great way for me to start getting back on track with meditating on the things of Christ. So I prayed the rosary that day. And then less than a week later, I felt prompted to pray it for my first cousin who was going through an anxious time. Soon after that, I discovered our local radio station played a recording of Mother Angelica praying the rosary with her sisters, each morning. I started to pray with them and noticed an increase of spiritual hunger in my life.

So, since the end of March, I've been praying the rosary every day with a few exceptions. I admit some days I'm more focused than others, but I know praying the rosary has changed my life. I am still surprised by all of this. God does indeed work in mysterious ways!
by Mary Rose at 4:27 PM

Email ThisBlogThis!Share to TwitterShare to FacebookShare to Pinterest
Labels: Rosary

Check out this new Traditionalist Catholic band that just released their first album.

From what I heard on the samples site, they sound really good.