What I Love About Catholicism: Sainthood 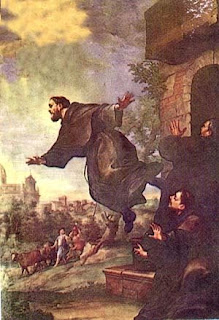 Last night, as I listened to a recent podcast by Fr. Roderick, I was struck by a prayer he shared with his audience. He was at home, saying a private Mass. During the Mass, he asked God this: "Please God, don't let me die before I've become a saint."

Fr. Roderick explained that if he was in a state of sin, separated from God in any way, he didn't want to die like that. He wanted to be in a complete state of grace, ready to meet his Heavenly Father with no barriers. If there were any, he wanted to know about them before facing Him.

Wow. That just rocked me back on my heels and then some. If a priest is saying such things, I think it would be a good idea for me to examine what being a saint means and put forth every effort possible to become one. It also struck me that this area is yet another one where non-denominational churches fall short although the perspective is needed even more than ever in this darkened world.

Here's how it works in the non-denominational church (and many Protestant churches) - come "as you are," and be forgiven. Attend church weekly. Join a small group and grow. Everything will be alright. The word "saints" is not one typically used. In fact, I can't remember that word being used much at all during my years of attending non-denominational churches. Of course the church encouraged me to be Christ-like, but what about dying to self? That particular part of our salvation didn't seem to make it into too many sermons.

I love praying the Luminous Mystery rosary on Thursdays. One mystery that always stands out to me is the Fourth Mystery: Jesus being transformed on the mount before Peter, James and John. I pray the rosary along with a recording of Mother Angelica and her nuns at Our Lady of the Monastery. The narrator prays, "Let us be transformed, Oh Lord, into Your likeness." That prayer always touches me because it reminds me why we are here on earth.

With Catholicism, this reminder is a daily one. There is always a saint to honor, to reverence, to emulate in their devotion to Christ. Even St. Paul said in his first letter to the Corinthians, "Is Christ divided? Was Paul crucified for you? Or were you baptized in the name of Paul?" (1 Cor. 1:13 RSV) In other words, St. Paul was saying follow Jesus Christ, not him; for St. Paul was only following Christ and preaching the message of Christ crucified.

This is the message all of the saints have continued to preach. They have counted the cost and embraced their sufferings. They have not sought their own pleasures, but only Christ. This is why remembering the saints is so important. It shows us the ultimate goal of our lives - to be transformed into the likeness of Christ. We look upon the saints and are in awe, knowing that each one was a frail human being until they opened themselves fully to be used as an instrument of God's grace. And God's grace, through the power of the Holy Spirit, sanctified them and made them holy.

This "saint-making" doesn't happen overnight. But it is especially difficult to happen at all in a self-serving culture, where even some churches have become centers of "I'm Okay, You're Okay. Now Let's Sing Kumbaya Together." Instead of training believers to understand that suffering and sacrifice are a part of a saint's life, many pastors choose to "tickle their ears" by bringing pop psychology into the mix, focusing on keeping their congregation in a nice, warm cocoon of denial.

Except this isn't the denial of the flesh, which we are called to embrace, but a denial that sacrifice and suffering is indeed, a part of the saint's life.

I used to think Catholics focused too much on suffering and sacrifice. Inwardly, I'd think, lighten up! Jesus Christ came to set the captive free! However, from my in-depth studies of Scripture, even I had to admit that Catholics were onto something. Throughout the years of my involvement with non-denominational churches, I would often feel that the church leadership was not preparing their flocks for any kind of hardship.

Catholics are not unprepared for what I believe will be a fresh persecution of the Church. (A caveat: Catholics who understand their faith are prepared. Others who are in parishes where "social justice" is preached above Christ crucified may have some difficulty, most likely vulnerable to total capitulation to an anti-Christian controlling institution.) Catholics, with their "silly superstitious" bond with the saints of old, have had years and years of very important, and very strategic training.

Their minds have been shaped, and yes, transformed, by the knowledge that to live for Christ is to die to self. This process is called sanctification. Together with keeping the Sacraments, following the Word of God and the traditions of the Church, a believer is beautifully kept within the safe protection of our Heavenly Father. We have been given the blueprint and the Catholic church has it. The Catholic church has preserved the truths of the Gospel faithfully, since Christ created His Church, His Body - to continue to give life to the world.

So now, I, too am echoing Fr. Roderick's words - Please Lord, do not let me die before I've become a saint. And I shall put every effort, every intention, to meet that goal, and only by the grace of God will I achieve it.
by Mary Rose at 5:44 AM

Beautiful, Mary Rose...the mantra of every lover of God should be those very words...

2 of my children are preparing for confirmation, and we have spent a lot of time this past year reading the lives of Saints. The diversity of our saints reflects our diversity as a church. I think they both have chosen wisely, my musically inclined daughter chose st. cecelia, and my adventurous, into everything son has chosen st.jude. Please pray for them as they make this important step into our faith as young adults.