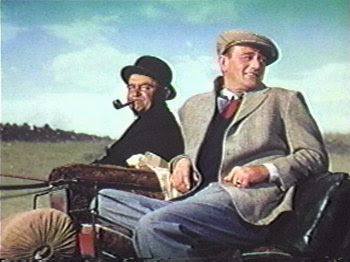 I happened to see this article on the Inside Catholic site, "The Fifty Best Catholic Movies of All Time." Really? So I checked them out.
Some surprised me. I guess I was expecting movies that were specifically reflecting the Catholic faith. A few do, but most don't. I still love "The Scarlet and The Black" with Gregory Peck playing the role of Monsignor Hugh O'Flaherty. It was a great movie and shed light on what the Vatican was doing during World War II.
Of course I love "Going My Way." Who can resist Barry Fitzgerald? We've watched "The Quiet Man" more than once or ten times, too.
Quality, modern entertainment is tougher to come by, which is why my husband and I often rent older movies, especially any with Jimmy Stewart in them. I'm saddened by how often faith gets bashed in films. You'd think with the box office smash of "The Passion of the Christ" (and the subsequent failures of anti-American, anti-Christian films) Hollywood would get a clue.
So what are some of your favorites? We can share and perhaps get something better on our movie night list than the latest lame offering from La-La Land.
by Mary Rose at 8:31 AM

I would consider "To Kill a Mocking Bird" a classic.

The Fraternity of St Genesius Novena begins today! Praying for all those involved in the movie business. You can become a member and make a committment to pray for those involved in cinema and theatre. As Christians we should always remember that prayer should be the first response in any crisis!

I really enjoyed Hitchcock's "I Confess", a very Catholic movie indeed from beginning to end.