What I Love About Catholicism: Holiness, Mystery and Reverence 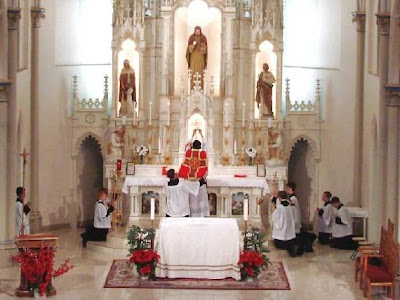 Lately, I've been thinking about Catholicism in all of its ripe fullness. The Mass, vestments, the Holy Rosary, the Sacraments, Catholic schools, traditions, feast days - and on and on. Catholics are often mocked or criticized for holding such things as important. Compared to the more "modern" celebrations of large non-denominational churches, Catholicism looks like the grandmother who refuses to smile.

But I thought more about who Jesus Christ was this week and how He is viewed through the lens of Catholic tradition. I thought about how completely holy He is, completely pure - and how this causes me to respond with both awe and deep humility. If He were to walk among us today, and if we really focused on who He is, who wouldn't respond with tears of both sorrow and joy? Sorrow, because we know how sinful we are and sin is especially clear to us when faced with pure holiness - and joy because through the love of our heavenly Father, by the power of the Holy Spirit, and the chosen vessel of the Blessed Virgin Mary, and the sacrifice of Jesus Christ - we have been forgiven.

Those who mock Catholicism are usually misinformed. They think they know what they so quickly dismiss as nothing more than lifeless rituals, but they really don't know because they've never really studied it. Catholicism is demanding on many levels. If you want to understand it, you can't just skate in on a Sunday morning, attend Mass, and then think that's it. And if you want to be fair, you can't simply judge an entire two-plus-millennium's worth of religion just because there were some priests and nuns who unfortunately, got it wrong.

Catholicism requires something of you. It isn't easy but when is finding treasure ever easy? If it was found easily, would it be worth much? Our relationship with our Creator is a multi-faceted one. In order to connect with Him, we need to separate ourselves from the world - which as you know, is no easy task. We are bombarded on a daily basis with unholy images, sinful pursuits, and irreverence. There used to be a modicum of civility within our society but it has been decreasing at an alarming level with each year's passing.

Jesus' disciples were recognized because they had spent time with Him. Not because they were busy with tasks but because they spent time in the presence of Holiness - it affected them, permeated them, and drew those who thirsted for the Living Water. Jesus is our focal point and from there, everything flows.

Within Catholicism, there is an awareness that who we are as His Church depends upon how we approach Him. When you hear someone say, "Other Christian churches are fine but it is the Catholic Church that holds the truth in full measure," it must cause some questions. The most obvious question would be: What is truth in full measure? We live in a world that rejects absolute truth but it really isn't anything new. The world rejected Jesus Christ when He walked upon dirt roads. So rejection continues.

I think about the non-denominational churches I've attended. Where are the Sacraments? Baptism, which some Christians call a "baby dedication," is only one. What about marriage? The receiving of the Holy Eucharist? Understanding the Holy Spirit and His place in our lives? Confession of our sins? Preparing ourselves for death and the joyful reunion in heaven with our Creator? Each one is a pivotal point in our faith. Why should any of them be treated lightly?

However, if you're a veteran of non-Catholic churches as I am, you'll know that quite often, these very sacred and holy milestones are treated lightly. As I've said before, many non-denominational churches don't celebrate Communion - even as a symbolic gesture. Yet Jesus' own disciples finally recognized our risen Lord during the breaking of the bread. (St. Luke 24:35) They were reminded of what He had done at the Last Supper.

Within our Catholic faith, each one of the Sacraments is meant for us to remember whom we belong to. It is to emphasize our identity in Christ. I almost want to say there is a natural progression from the profane to the sacred, but I know it doesn't "feel" natural, at all. It is a battle to pursue holiness. Each day we are faced with the same temptations as Christ but we are not alone. As Catholics, we have divine assistance in both Scripture and Tradition. We hold the Bible dear to our hearts, but we also are protected and guided by the Traditions of the Church and the prayers of the saints. There is reverence as we approach the heavenly throne of grace. And this is how it should be. We have been given the awesome gift of salvation and yes, we should approach it with fear and trembling. (Phil. 2:12)

Many who have observed a resurgent interest in the Traditional Latin Mass have reasoned that there is a hunger for mystery, and that this ancient rite fills it. I would agree. But I also believe that the "New Mass" is also filled with mystery for those who are open to it. Again, it is awareness and an intentional mindset that will allow a person to receive such things. I would argue that a person could attend a Traditional Latin Mass and still not receive if they're mind is wandering and distracted.

What is meaning? I don't mean to sound like I'm debating the politics of "is" but really, "meaning" is defined by our perception, is it not? Or an acceptance of what has been defined as meaningful by another? Since my return to the Catholic Church, I rejoice in meaning, I revel in it, I hunger and pursue it. Perhaps this was why I never felt completely satisfied within a non-denominational church. I wanted, or perhaps more accurately, needed, for things to mean something. Attending a church service that was comprised of twenty minutes of worship time and a sermon typically filled with cultural references would more often than not leave me wanting more. At times I would think as I left a service, "What just happened?" Meaning, was an afterthought.

I believe the Catholic Church is going to experience a revival. Yes, a revival. A term often assigned to Pentecostal churches and the like, but one that I think is going to be redefined soon. Our world is changing at a rapid pace and it's not growing lighter, but darker. People instinctively search for meaning because it was how we were created. Aside from the naysayers, most people want meaning in their lives. And quite frankly, order brings comfort. (Which is a whole other topic but one I've also been thinking about.)

It is within the Catholic Church that we have this in fullness: an awareness of the sacred and holy, a desire to preserve the mystery of our faith, and a reverence for that which we can't wholly comprehend but yet believe is true. It is majestic and glorious, our Catholic faith. And, available to all.
by Mary Rose at 9:00 AM

This week our priest is away so there are no weekday Masses or Holy Hour; I have been attending regularly and really felt the absence of the Presence of Our Lord. "My soul thirsts for you...."
I sure hope you're right about a revival of our Church. Seriously, where else is there to turn, but to Jesus and the Church he founded; nowhere else is there to be found the fullness of the Truth.

YES!
I have been praying and fasting for revival for the last two years, ever since my conversion.
I am also getting the sense that there may be a break thru coming.