Vatican: Confession Is Not Therapy 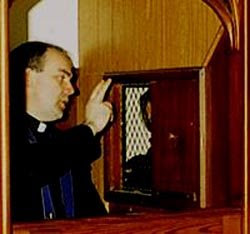 Hooray for the Vatican! Today they warned how this precious sacrament has been misinterpreted for Catholics:

Confessing in the Catholic church has long provided material for Hollywood screen-writers, with a dark wooden booth, a priest's stern silhouette glimpsed through a screen and the uttered phrase "Bless me, Father, for I have sinned."

But, according to the Vatican, real life confessions are in danger of turning into cosy counselling sessions, which is why priests are to be issued with a handbook instructing them to give their flocks a sharp reminder of what sin is all about.

Last year, when I discussed with my brother the various reasons for why I was returning to the Catholic Church, he brought up confession. "I see no reason why I should have to confess my sins to a priest. Who's he, anyway?!" He fumed.

Unfortunately, my brother is away from the Catholic Church due to a series of missteps by a local parish and the stonewalling of a Boston Bishop regarding a sexual abuse case. He, like me, did not receive a solid catechesis and so does not understand the authority that has been given by Jesus Christ to His apostles throughout the ages.

I asked him, "So. In your church [non-denominational], how often do you confess your sins to anyone?" He didn't see the value in it. He, like many, think that confessing is between oneself and God. Of course we confess to God, but something profound happens when we name our sins aloud and confess them to someone. It is a humbling experience and one that should bring us to full repentance.

Sadly, many Catholic churches have relegated this sacrament to a "feel good therapy session" where a person is facing the priest in a comfortable chair, pouring out their woes. This is not what confession is meant to be.

A thorough examination of conscience is strongly recommended. It is a time to evaluate how far we have fallen from the life Christ has called us to live. Too often, I think some view confession as a time to be mollified instead of convicted. If a good Catholic priest isn't going to knock me upside the head and say, "Straighten up!" Who will?

I pointed out to my brother that the Bible says we are to confess our sins to one another but rarely does this happen. I've been a member of countless Bible study groups and even in those with consistent prayer time (where the group prays for a member's needs), I never saw consistent confession. And I humbly submit a big reason for this was because of fear.

What are we, as Christians, afraid of? Judgement. We know we did something wrong. We would like to maintain the flimsy sense of "I'm Okay, You're Okay" in our fragile psyche. Our egos like to live in this comfy world where someone would pat us on the shoulder and say, "Now, now. It's all good. So you coveted your neighbor's new car. It's understandable given that you have a lousy job and just took out a second mortgage to pay for your kid's college tuition."

Worse, when we confess to someone who is not living under a vow of secrecy, we know there's a chance of it becoming grist for the rumor mill. Unfortunately, I've been a part of this myself. By listening to someone share a personal part of a brother or sister's struggle with sin, I assured myself it was "a prayer concern" and then passed it on to someone else. This is why I love it when a Catholic asks prayer for "a personal intention." I truly don't need to know the details. If someone is struggling with a sin, I'd rather have them say just that and I'll pray accordingly.

And that type of prayer is only part of the equation. If a person has sinned, they need to be forgiven. Jesus Christ forgives us, but who did He choose to be representative of Him while on earth? His apostles. So not only do we need prayer from our fellow brothers and sisters to help keep us from the temptation of sin, once we've fallen into sin - we then need forgiveness. The Bible is clear on the authority that Jesus Christ gave to His disciples to do this.

Sin is ugly, evil, and deadly to our soul. I praise God for our priests who have the authority to bestow this sacrament. And I can't help but wonder if the attempt to make the Sacrament of Reconciliation more of a "therapy session" was initiated by those who promote a blurred line of distinction between the laity and the priesthood. After all, if this sacrament is nothing more than a time to pour out your woes, anyone could listen.

But only the priest has the Biblical authority to forgive sin. Confidentially. Good for the Vatican for reminding us.

Email ThisBlogThis!Share to TwitterShare to FacebookShare to Pinterest
Labels: Sacrament of Reconciliation