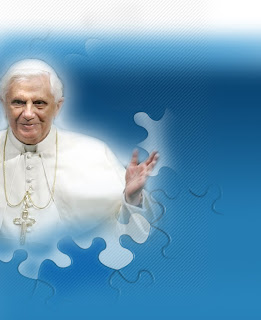 Well, what do you know. We have a Pope who is embracing Web 2.0 with the web portal, Pope2You! For those who may be unfamiliar with the term, "Web 2.0" is a phrase to describe all the web application advancements that many have come to love - such as Facebook, LinkedIn, Twitter, YouTube, and Flickr, just to name a few.

I've admired our Holy Father for many reasons, but now I admire him for being open to new technology. Some Catholics may be either unaware or uncaring about the internet, but for those of us who enter into the "Catholic Cybersphere," we understand its potential. Personally, I have grown tremendously in my return to the Catholic Church by visiting a variety of blogs, Catholic online TV and radio shows, and message boards. To have so much information at my fingertips is a huge blessing.

I've been busy this past weekend tweaking my newly redesigned digital scrapbooking site. (ScrapShot Magazine & Designs) I'm also in the beginning stages of "screencasting" a tutorial for my digital scrapbooking website. Screencasting is when you record what you do on the screen and include audio, which is often a explanation of what you're doing on the screen. It's a perfect approach to help people learn a software tip or trick. I love doing this stuff!

On another note (and not a very smooth segue), I was saddened by yesterday's murder of the notorious late-term abortion doctor, George Tiller. If anyone believes in the sanctity of life for the unborn, it must be extended beyond to everyone. It becomes a difficult moral choice to decide who should live and who shouldn't. The Holocaust and other "ethnic cleansings" around the world proved that to systematically annihilate anyone according to their beliefs or race is abhorrent and at its core, evil.

My concern, which I'm sure is any pro-lifer's concern, is how this will affect the movement and the backlash that already has begun. Then again, it would seem the pro-abortion folks will find anything they can to attack the pro-life movement. So, I'm going to stand strong today. If anyone mentions the story, I will say it is wrong, period. We still don't know who did it, so I won't speculate. But I'll stick to the basics. Taking a life, whether it is murdering a defenseless unborn baby in the womb or murdering a defenseless man in broad daylight - is wrong.
by Mary Rose at 5:31 AM