Feast Day: St. Pio of Pietrelcina - and the Gift of Prophecy 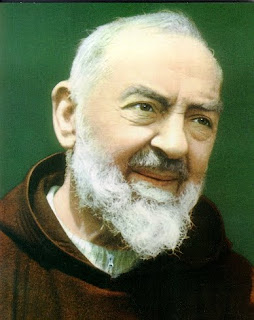 I remember when I heard about Padre Pio for the first time. Somewhere in the midst of the many Catholic sites I was visiting, Padre Pio's name popped up and I started to investigate why this humble priest was so popular; and what made him a saint.

Since my background within the non-denominational church was full of prophetic training and teaching, I was especially intrigued by Padre Pio's confessional. From Catholic.org:

Padre Pio had the ability to read the hearts of the penitents who flocked to him for confession which he heard for ten or twelve hours per day. Padre Pio used the confessional to bring both sinners and devout souls closer to God; he would know just the right word of counsel or encouragement that was needed.

This was amazing to me. I haven't written much about this but if you're familiar with the early history of the Vineyard Christian Fellowship, you'll remember it was founded on operating in "the gifts of the Spirit." This included the prophetic gift, which could be either foretelling future events or having a "word of knowledge" about someone that was divinely given. During my time in Charlotte, North Carolina, I trained with a ministry to grow in these gifts. Aside from the many pitfalls and distractions that some experience while doing this, I still believe it is a good thing to pursue our spiritual gifts and use them for the propagation of the Gospel.

It surprised me to see this spiritual gift exercised so boldly in the Catholic Church - and what better place for it to happen than within the confessional! This, to me, was what the spiritual gifts were meant to do! Draw people closer to God!

A little more background on the prophetic: This area is probably one of the most misunderstood and most abused spiritual gifts in the Church today. Some have looked at this gift as a way to prophesy glorious future events for their lives. I first discovered spiritual gifts in my early twenties. I remember feeling very excited about it. Who doesn't love gifts?! But I realized early on that spiritual gifts were meant to do one thing - bring us closer to God. It could either be something to exhort the believer to hang on, don't give up, believe God has everything in control; or it could be something that would convict a non-believer that yes, God does exist and sent His Son Jesus Christ to save him.

One time, I was in a Bible study group, meeting in someone's home. After I prayed with someone, a girl said to me, "You have the gift of prophecy."

I looked at her. "Really? I guess I need to learn more because I don't know anything about it." She smiled. So that started my long journey toward studying about the spiritual gifts. There is much said about them in the New Testament, primarily by St. Paul. But for prophecy, there are many examples in the Old Testament as well. (Hence the "Major" and "Minor" prophets. Also, there is a difference between the office of a prophet and a prophetic gift.)

Prophetic people are intense. We can see these in many of the Old Testament prophets and, with our modern ones, such as Padre Pio. You don't mess around with a prophet. They see things pretty much in black and white. There isn't much gray to them because they see God's directives as being as plain as the nose on your face. And because of that, prophetic people are not the most diplomatic folks in the church. However, they are a gift to the Church and I would love to see more of it within the Catholic Church. I know it's there, I just want to witness it myself.

Padre Pio wasn't known for his tact. He was known for hitting the nail squarely on the head time and time again. I also think the reason his confessional was so popular was because people have a deep-seated need to be known. It blesses us to no end to realize God indeed knows our hearts, our fears and desires, and wants to draw us to Him. Even being chastised is better than not being known at all.

I also have to chuckle when I think of an Italian having this gift. Since I'm half-Italian, I can knock my heritage a bit. (smiling) Italians are very passionate people. They love passionately, and fight passionately. Tempers flare pretty quickly but then an Italian will settle down and move on to what's next. So with Padre Pio being in a confessional for ten to twelve hours a day, it's not hard to imagine that on occasion he would come down hard on a few folks. Some probably needed it.

I don't know what it is about the tough exterior of a person that makes us want to either make him smile or soften, but I'm sure many were drawn to Padre Pio's strict, no-nonsense approach and loved seeing him laugh. Those who are no-nonsense have a way of making us stand up a little straighter in our seats and pay attention to our lives. Padre Pio was certainly such a person and I am very grateful we had him. I'll end with a prayer for his intercession. Also, on this same page is a prayer I've often prayed after receiving Communion. It is beautiful.

Dear God, You generously blessed Your servant, St. Pio of Pietrelcina, with the gifts of the Spirit. You marked his body with the five wounds of Christ Crucified, as a powerful witness to the saving Passion and Death of Your Son. Endowed with the gift of discernment, St. Pio labored endlessly in the confessional for the salvation of souls. With reverence and intense devotion in the celebration of Mass, he invited countless men and women to a greater union with Jesus Christ in the Sacrament of the Holy Eucharist. Through the intercession of St. Pio of Pietrelcina, I confidently beseech You to grant me the grace of (here state your petition). Amen. Glory be to the Father... (three times).
by Mary Rose at 5:49 AM

Email ThisBlogThis!Share to TwitterShare to FacebookShare to Pinterest
Labels: Saints