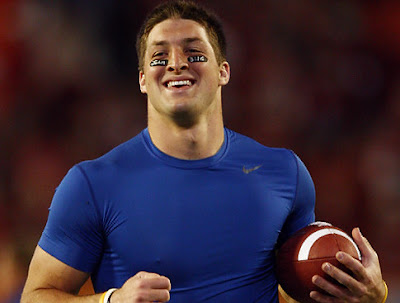 Hat tip to the Lair of the Catholic Caveman (thanks, Vir Speluncae Catholicus!) for letting us know about the video below. It highlights the cold-hearted (and misnamed) Joy Behar discussing the controversial Super Bowl ad which will show college football Heisman Trophy winner, Tim Tebow, and his mother. The ad is sponsored by Focus on the Family and reveals that Tim's mother, experiencing a difficult pregnancy, was encouraged by her doctor to abort the baby, which ended up becoming one of the greatest college quarterbacks and the first sophomore to win the coveted Heisman. (Image by Miralle/Getty)
As you may imagine, the ad is causing all sorts of an uproar among the "culture of death" crowd.
I applaud CBS for not backing down on such a controversial issue and keeping the ad. (I'm also well-aware they want the money.) But the video below really speaks volumes. Behar exposes the faulty sense of logic that defines the pro-choice crowd.


Here is how the reasoning works: If the person escaped abortion but ended up becoming a pedophile rapist, then the mother obviously didn't make such a great decision. It just was lucky her son became one of the country's most talented football players.
The culture of death crowd always places an emphasis on what a person does - what they can produce, not the intrinsic value each human being has in simply existing (and being created by God).
This is how they justify murder.
This is how they justify aborting a baby that resulted from a rape. They seem incapable of separating the act of rape, and the miracle of life that happened. They lump everything together.
This is how they justify killing Terry Schiavo. It is how they rationalize killing any member of society that doesn't meet their ever-changing qualifications to justify their existence. Such thinking led to death camps.
When we start qualifying a person's worth by what she can or cannot do, we embark upon that hideous path that leads to killing those who are a "burden" on society. We've already seen this faulty logic enter into the debate about health care and "death panels." I've been stunned by how many people came right out and said that if an elderly person was in the hospital, needing expensive medical care, that perhaps it was "about time" to allow that person to die. And who qualifies such a decision? You can toss a coin and get all sorts of answers on that one. In the "culture of death" crowd - life is a burden unless enjoyed by the enlightened segment of society.
Joy Behar's comment was completely ignorant and revealed how nasty she really is. Her attempt to undermine the choice by Tim Tebow's mother shows how far she will go to defend her Culture of Death membership card. To be honest, if you placed a pedophile rapist next to someone who believed in murdering a defenseless baby in the womb - I'd have to ask: Who is really the worst, unethical person in this picture? Think about that one, Behar.
by Mary Rose at 5:22 AM

Email ThisBlogThis!Share to TwitterShare to FacebookShare to Pinterest
Labels: Pro-Life

Joy should have her mouth sewn shut. That woman gives me a pain in the ....