The Spiritual Discipline of Being a Homebody #Catholic #tcot 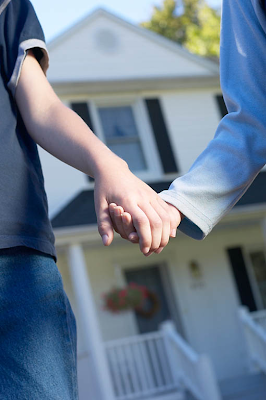 My husband and I are unapologetic homebodies. Few things please us more than being together at home, engrossed in one of our hobbies or discussing all matters of life, both profound and mundane. We enjoy one another's company immensely but I recently realized the true secret of being a homebody.
You have to enjoy your own company.
This may sound basic. It may even sound simplistic. But I am beginning to think that enjoying the solitude of one's own company is a discipline and a spiritual one at that. The great Catholic saints often spent long periods of time in solitude. Monasteries are famous for transforming menial tasks into opportunities for prayer and mediation. Everything holds meaning when you slow down and take the time to recognize it.
A few weeks ago, I attended my "nearby parish" where the priest admitted in his homily that he avoided "silent retreats" for years and instead, sought retreats that included other people and conversation. He realized that the reason was because he didn't like himself very much. When all was quiet, and he was alone - he could not escape the fact that he did not enjoy his own company.
My husband and I discussed how our society is often obsessed with a frantic pace; hurrying from work to a social group or event. How often do people feel like a loser if they spend a Friday or Saturday night home alone? Yet our body, mind, and spirit desperately need these times of solitude not only to recharge our batteries, but for times of reflection on matters of faith. When a person is rushing from one social event to the other, to be "seen by the right people in the right places," it reveals a life lived by the shallow demand of other people's opinions. There are some people who consider it a major failure in their life if they don't get invited to an exclusive party.
When I was living in Charlotte, North Carolina, serving at the time as the church administrative assistant, there was such a party. It seemed as though almost all of the staff was invited to the home of the couple who were the children's ministry pastors. The ministry staff was a fairly close-knit group. When I found out everyone in my building had been invited but me, I was surprised and slightly disappointed. To be honest, I didn't have that much in common with the children's pastors, but it was the principle of the matter - that I was snubbed.
My old childhood demon of rejection tried to haunt me that night. But it was in for a surprise. Because over the years, I had met this particular "demon" in battle and finally gained victory by a divine revelation. No matter who rejected me on this earth, God never would. No matter how many times other people would condescend and patronize me, Jesus never would. In fact, the world often treated Jesus Christ with contempt and hatred, but He never allowed it to deviate Him from His mission. And He always answered with love and re-framed the conversation to shine upon God, His father.
So on that Saturday night, rejection tried to gain entry but found the door firmly shut. Instead, I spent the night with God in prayer and scripture reading. I rejoiced in God's love for me and how perfect His will was for my life. I knew there was a purpose for all things, including my exclusion from a social event that I wasn't sure I really wanted to attend, anyway. I ended up falling asleep in my bed with a smile on my face.
Later I discovered one of my prayer partners (and a wonderfully wise woman) was also not invited. She mentioned that there was alcohol there and probably a good thing neither of us were present. It was a gossipy group and adding alcohol to the mix could only have made the situation worse.
Because I was single for many years (not marrying until I was 39), I had plenty of those "nights in solitude." When you're alone, you're faced with all of your weaknesses and foibles. Those times of showing the world a stronger facade fades quickly when no one is around. It is during those times that we are given a valuable treasure: Turn to God. As one approaches God in all their nakedness and vulnerability, he or she is met with a surprise. God embraces us. But in that embrace is also truth. As we allow ourselves to enter into such intimacy with God, our sin is revealed. It is at that moment that I am given a profound choice: ignore it at my own peril or repent and receive God's grace.
These moments do not happen when I'm rushing from the car to work, or when I need to visit a store. My mind is on the moment and what I need to do, not who I need to be. But when I'm at home, being a "homebody," those wide slices of silence find me and beckon me to an authentic faith, a transformative relationship with God that needs to be fed within the interior stillness of a soul at rest.
I am so thankful for these times and remind myself to slow down and savor them. For within these times of solitude and reflection is the fuel that will keep my spiritual fire burning bright. But first, I have to allow myself to be in an environment that will be conducive for such bountiful spiritual transactions and for me, that is in my home.
by Mary Rose at 4:30 PM

It's good to be at home with oneself.

This is so very true and so few people realise it.

Ellis & Jean, thanks for visiting. I think this is why I appreciate the silence of the Traditional Latin Mass so much. It truly is a respite for my soul.