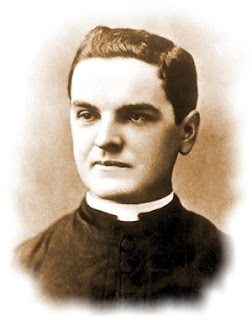 I would like institute a Friday tradition called #FrFriday. For those who aren't familiar with the hashtag, it is a way to mark a post on the popular micro-blogging service, Twitter. If you go to Twitter's search engine here, you could follow all sorts of topics. In fact, the hashtag search has become so popular that many conferences now create their own hashtag for an event (like #comic-con, going on now) so people who are unable to attend the conference can keep up with the observations of those who were able to attend.

I have no idea of my #FrFriday will ever catch on. Believe me, I'm no stranger to "starting" something only to see it go over like a lead balloon. But I keep trying! I will keep on trying for this particular hashtag, #FrFriday because on Twitter, Fridays are traditionally the day where others recommend other people to follow. (#FollowFriday) I thought that if priests aren't worth following, who is?! Hence - #FrFriday.

So I'm on the hunt to find priests both living or deceased to follow. I found a very interesting one today, Fr. McGivney, founder of the Knights of Columbus. Fr. McGivney was so beloved by those who knew him that they are trying to get him recognized as a saint. That's amazing. Pope Benedict has given Fr. McGivney the title "Venerable Servant of God."

Fr. McGivney was a priest during a time when Catholics were scorned and reviled in American society. During the late 1800's, Catholics were often given menial, low-paying jobs. If the breadwinner of the family died, it often left the wife and children penniless. Fr. McGivney's vision was to form a supportive group for men and help future widows and orphans. The name, "Knights of Columbus," was chosen to pay homage to the Catholic discoverer of America.

A beautiful homage to him can be found at this site, www.fathermcgivney.org. This man was made of the stuff our country was built upon: loyalty, devotion, bravery, humility, compassion, and great faithfulness to the Mother Church. He is an excellent example for our future priests.

God bless Fr. McGivney, and may perpetual light shine upon him.
by Mary Rose at 5:41 PM

Email ThisBlogThis!Share to TwitterShare to FacebookShare to Pinterest
Labels: #FrFriday, The Year of the Priest

I just found your blog and am enjoying it immensely. I thought I'd let you know that if you're ever in New Haven, Fr. McGivney is buried at St. Mary's Church. My parents frequently go there for Mass. It's a beautiful building.