Not Everything Is Art: The Blurring of the Priesthood 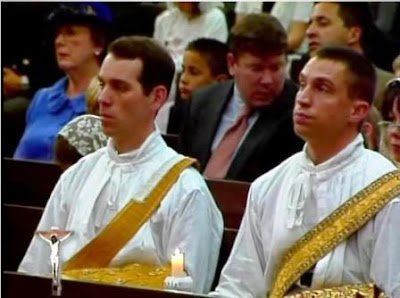 When I led an artists group years ago, I remember having lively discussions with a few of the members about the definition of art. Some said that anything could be seen as art. My reply was, and still is, that there is good art and bad art, but the moment one tries to call "everything" art is the moment true art loses its identity.

We live in extraordinary times. More than ever, the world does not like clarity. Being "flexible" or fluid in one's views and choices has dominated both culture and public policy. Religion continues to be a thorn in the side of leftist politics precisely because it presents qualifications, standards, definition, and clear consequences. Such concepts do not square well with a world that rejects absolute truth. In the mind of the sinner, there is no such thing as truth, for with truth comes judgment. Either something is right or it is wrong. The idea that there is a "black or white" is highly repugnant to those who want to blur the lines in order to continue to live as they please. They want nothing to do with an accountability to a God they cannot see and worse - expects a sacrificial pursuit of selfish desires.

It is no surprise that some within the Catholic Church would like to "remove" a barrier within the church, which is between the ordained and non-ordained. From a recent article published by California Catholic Daily:

“’The way the Church is now is not the way it was meant to be,’ says John Hushon, a VOTF board member who serves as council’s co-chair. ‘The Gospels make it abundantly clear that Jesus envisioned a community that welcomes and encourages the gifts of all. The two-tiered clerical system that separates the ordained from the non-ordained was never meant to be, and it has caused enormous harm. Vatican II attempted to recapture the universal call to ministry, but this promise has not been fulfilled.’”

I almost don't know where to start. "The two-tiered clerical system... was never meant to be?" Has this man read Scripture? Studied history? Or even studied corporate business structures? I'm no Ph.D., but his ignorance is breathtaking. Every structure - from football teams, to study groups, to large corporations, to church entities - all have distinct levels of leadership. Not everyone is the captain of the ship and hierarchies - whether Mr. Hushon likes it or not, exist for a reason. Put simply, leadership helps the group reach its goals.

I've been a member of churches where this distinction between the ordained and laity has been blurred. All the church was "the priesthood" and the pastor just happened to be chosen as the guy who stood up in front of the congregation each week. But he wasn't special. In fact, many times other staff members would give the Sunday teaching. Some called it the "leadership team" or "senior staff" - but the meaning was essentially the same. The people in those positions were there because they either fit the management profile or somehow caught the attention of other leaders. And, those faces changed on a regular basis. Some were "sent" to plant a church, some left on bad terms, some were pushed out when it was evident they weren't supporting the party line any longer.

Only within mainline denominations were the leaders carefully groomed for their positions. It isn't unusual for a non-denominational church to place immature people into positions of leadership. It also isn't unusual for this to occur with the "leader" having either little or no formal Biblical training.

I believe in distinctions. In fact, I believe they are necessary in order to avoid diluting the purpose of that which is defined. The priesthood is a prime example of this. Not everyone is called to the priesthood. Just St. Paul said in his letter to the Corinthians, If the whole body were an eye, where would be the hearing? If the whole body were an ear, where would be the sense of smell? (1 Cor. 12:17 RSV) Even our own bodies testify to the truth that each part has a specific purpose, and within the Body of Christ; there can only be one head. Not many. One. We know this is Jesus Christ. But the head has one mouth and that mouth, in my estimation, is the priesthood.

When there are too many voices, there is confusion. Again, I experienced it and sadly, the consequences. I don't claim to have all the answers when it comes to exercising our spiritual gifts within the Body of Christ, but I am rather sure that all gifts are to fall under the headship of Christ and His chosen representatives. Of course we have spiritual gifts - but those gifts are to be used within the Body of Christ and within the world for His purposes; not our own. Too often, Christians have used their spiritual gifts as a way to empower themselves and gain influence over others. This runs completely counter to what the gifts are meant to bring to the church and society.

The priesthood helps guide and strengthen the church. There needs to be agreement within an authoritative structure in order to help the church reach its goals - which is why the Magisterium is so important. Healthy debate is expected and part of the process, but sooner or later, agreement needs to occur in order to proceed. Territorial skirmishes, grievances, and unforgiveness are just a few issues that arise when churches fail to clarify leadership's role.

Within the Catholic Church, we also have the Sacraments to consider, which can only be administered by the priest. Thoughts about what would happen if everyone could administer the Sacraments could perhaps be another blog entry. I suspect though, that if "everyone" could do it, it would cause a number of problems.

Email ThisBlogThis!Share to TwitterShare to FacebookShare to Pinterest
Labels: Spiritual Musings, Year of the Priest

Well said. And It'll be a cold day in Hell before I would read an article about "A New Church" when the old one is just fine. I'd rather spend my time reading something of Spiritual value! Why validate such a person by reading his clap-trap.