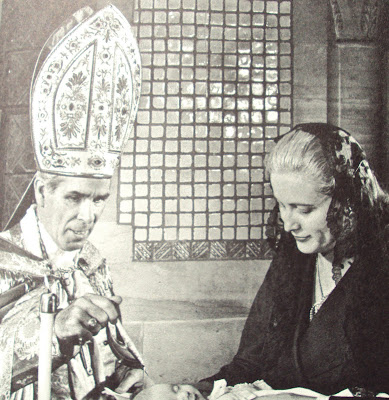 Fr. Zuhlsdorf has a lively discussion going on regarding head coverings for women and has a poll asking what you think about it. Visit and vote! The comments in the combox are very interesting.
When I returned to the Catholic Church in 2008, I didn't intend on falling in love with the Traditional Latin Mass, but I did. The first time I attended, I was surprised to see how many women wore a mantilla (The lacy veil women wear in Spain.). Within a week, I found a veil at my local Catholic bookstore and bought it. That Sunday, I wore it and haven't attended our Extraordinary Form Mass without it.
There are a few reasons why I love the veil. Years before I returned to the Church, I was intrigued with Jewish prayer shawls. The tradition of men taking the prayer shawls and covering their head with it as they prayed, touched me deeply. I was reminded of Moses who went before God and covered his face to protect the sacred result of that meeting. Covering one's head signified reverence and an appreciation for the sacred.
I bought a prayer shawl from a woman who had visited Israel and brought some back. I remember at times using it as I prayed and really liked it. At the time, I had no idea about women's head coverings apart from the Amish. But I liked feeling as though I was entering into a sacred space for prayer and having something over my head accomplished that purpose.
The first time I wore the veil to Mass, I had that same feeling. I also knew of the verses from 1 Corinthians 11:3-7:

But I want you to understand that the head of every man is Christ, the head of a woman is her husband, and the head of Christ is God. Any man who prays or prophesies with his head covered dishonors his head, but any woman who prays or prophesies with her head unveiled dishonors her head--it is the same as if her head were shaven. For if a woman will not veil herself, then she should cut off her hair; but if it is disgraceful for a woman to be shorn or shaven, let her wear a veil. For a man ought not to cover his head, since he is the image and glory of God; but woman is the glory of man.

Wearing a head covering signified an understanding that there is a hierarchy of submission when we pray to God. What some may not understand is that Scripture says both men and women need to submit, not just the woman. The woman has an outward sign of that submission.
For me personally, I like it. I don't think it should be required because if it were, feminists would have a field day denouncing the Church and men for being controlling. I think what is happening now is that more women are starting to examine this practice and experience for themselves the way it affects their heart during worship. That to me is a very good thing.
For those who aren't sure, I'd say try it. Some are starting to veil for the Novus Ordo Mass, which is a little different, only because the tradition of wearing a head covering is not common at all. (In fact, I rarely see women wearing even a hat.) I've worn my mantilla at times within a Novus Ordo, and other times a hat. I know whenever I've done it, I've always felt as though I've entered a secret place with God. But that's me.
I'll be curious to see how Fr. Z's poll turns out. Remember to vote and check the comments if you have time!
by Mary Rose at 11:39 AM

Before I say anything - I have a veil, I wear it to the TLM.

But honestly most women don't look good in their veils. Some of the veils I've seen look downright cheap and dirty as well (maybe it's the polyester material). I think hats are preferable. Before V2 all the women in my family wore hats, no veils (except on their wedding day). I don't understand this sudden fascination with veils. In the Latino culture maybe but not North America or Northwestern Europe.

Our N.O. Mass has so many veiled women that I don't pay it any mind. Either way is not an issue.

I come at this topic not from a fashionable position (although I understand what you're saying, Angela) but more from a spiritual perspective. To me, having something draped over my head is more akin to the prayer shawl example I gave. I've worn hats, but prefer the veil.

I do love hats on both men and women, though! And we have a young woman in our parish who finds the most remarkable and unique vintage hats. I love seeing her in them! Maybe someday I'll invest in some nice hats but for now, I'll stick with my white mantilla.

KK, that's interesting. I wish I could attend your N.O. Mass because around here, I've never seen a number of women doing this. There's a more traditional parish in town and I've seen maybe two women who did it, and this was in a crowd of about 500. I think it's pretty nifty you have so many who do it.

I can only speak from my own experience and know it's made a difference in my life. But I'd never want to see any woman feel badly if she didn't do it.

The first time I wore a veil to a TLM three things happened.

1 - I spent more time fussing with it than paying attention to the Mass.

2 - I spent a lot of time comparing my veil to those worn by other women. (Mine was in the Top Three of quality, color, cleanliness and pattern - isn't that awful?!)

3 - I really did feel like I was part of the Bride of Christ as I walked up to Communion.

Angela, that is funny! For some reason, I got the picture of a fashion show in my head, with church ladies walking down the catwalk with their veils and then doing a little pirouette at the end. (!)

Sometimes I fuss with it but over the past two years now, it's mostly just there. Sometimes I'll put a clip on either side to anchor it so it doesn't slip.

Number 3 was really beautiful. Makes me want to stay on the straight and narrow even more. :-)

The fashion show idea is hilaious!

I thought the veil was supposed to act a bit like blinders (which it did while I sobbed post-Communion as the organ played Adoro te Devote - the first time in my life I have ever heard it sung at Mass) but for me to really pay attention I suppose I would have to close my eyes. There were so many things to look at in the church though! It's a very humble church, no gold plating or ornate carvings, etc. but there was just something different abuot it than my round, kneelerless church (although it's much improved since the renovation!)

I think you need to read the rest of the 'chapter' specifically vs 13-16. One could easily say that only women with short hair need to have their head covered. But most importantly, Paul says "we don't have such a custom nor do the churches of God."
I find lots of people quote this passage with out reading it all the way through.

L.A., I read the verses you referred to, and also some commentaries regarding this passage. (I recommend Blue Letter Bible, a wonderful online Bible tool.)

First, St. Paul is pointing out that "nature" dictates that there is a difference between male and female, and as such, a distinction in hairstyles follows. (v. 14)

As for v. 16, I'll just quote from Matthew Henry's commentary:

He sums up all by referring those who were contentious to the usages and customs of the churches, v. 16. Custom is in a great measure the rule of decency. And the common practice of the churches is what would have them govern themselves by. He does not silence the contentious by mere authority, but lets them know that they would appear to the world as very odd and singular in their humour if they would quarrel for a custom to which all the churches of Christ were at that time utter strangers, or against a custom in which they all concurred, and that upon the ground of natural decency. It was the common usage of the churches for women to appear in public assemblies, and join in public worship, veiled; and it was manifestly decent that they should do so. Those must be very contentious indeed who would quarrel with this, or lay it aside.

Now, that said, I will say that a custom existed for many years within the Catholic Church, where women wore some type of a head covering. It was only after Vatican II that this custom changed. There is debate about whether Canon Law was abrogated or not regarding this practice. I'll post more on my blog on that issue.

Thanks for visiting and bringing up the verses. :-)