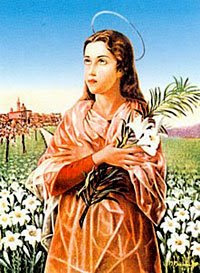 Maria was born in 1890. Her father died when she and the other five children in her family were small. At twelve, Maria was already very pretty. She helped her mother on the farm, in the house and with the care of the other children. She never complained because they were so poor. In fact, she cheered up her poor mother and was a great comfort to her. She went to Mass regularly even though it meant a two-hour walk. Maria also received the sacrament of Reconciliation as often as she could. A young neighbor, Alexander, tried a few times to make Maria sin. She absolutely refused. She did her best to avoid him. July 5, 1902, was a hot summer day. Maria was alone in the cottage mending clothes. Alexander came again to try to make her sin. He dragged her into a room. When she tried to scream, he stuffed a handkerchief into her mouth. Yet Maria managed to keep saying, "No, no! It is a mortal sin. God doesn't want it. If you commit it, you will go to hell." And she struggled as much as she could. Alexander panicked. He stabbed her furiously with a dagger. Then he ran away. Maria was taken to a hospital, where she died about twenty-four hours later. During her last hours, she forgave her murderer. Her only worry was for her mother. With great joy, the girl received Jesus in Holy Communion. Then she went to heaven. Alexander was sent to prison. For a long time, he did not repent of his horrible crime. Then one night he had a dream or vision of Maria offering him flowers. From that moment on, he was a changed man. When he was freed from prison after twenty-seven years, his first visit was to the Goretti home. He asked Maria's mother for forgiveness. Then Alexander spent the rest of his life as the gardener in a nearby monastery. Maria was declared "blessed" by Pope Pius XII on April 27, 1947. He appeared on the balcony of St. Peter's with Maria's eighty-two-year-old mother, Assunta. Three years later, on July 25, 1950, the same pope declared Maria a saint. He called her "a martyr of holy purity." Today we may want to pray for women who have suffered abuse.

You can find more information here and here.

Oh Saint Maria Goretti who, strengthened by God's grace, did not hesitate even at the age of twelve to shed your blood and sacrifice life itself to defend your virginal purity, look graciously on the unhappy human race which has strayed far from the path of eternal salvation. Teach us all, and especially youth, with what courage and promptitude we should flee for the love of Jesus anything that could offend Him or stain our souls with sin. Obtain for us from our Lord victory in temptation, comfort in the sorrows of life, and the grace which we earnestly beg of thee (here insert intention), and may we one day enjoy with thee the imperishable glory of Heaven. Amen.

St. Maria Goretti, pray for us!

Prayer Before a Dance or Party
Dear Saint Maria Goretti! The world teaches that we must please others in order to be popular. Conscience demands that I please God more than one who asks an evil thing in the name of false love. Teach me by your example to instill into others a real respect for modesty and purity. Through your powerful intercession, help me to make of this evening an occasion for helping others to become spiritually stronger. Grant that others may see in me reason to change their ways, if that be necessary, and that I may have the courage to resist any temptation to sinful conduct. Let others be led closer to Jesus and Mary by my example. Oh Little Saint who wanted to be popular only with your Divine Master and His Blessed Mother, help me to imitate you. Amen.
Our Father, Hail Mary, Glory be to the Father, etc.
St. Maria Goretti, pray for us!

Prayer Before a Date
Dear Little Saint Maria Goretti! Teach me that God must be my first love and that all other love is based on Him and Him alone. Obtain for me the grace to cease toying with the occasions of sin and to remember that my body and the bodies of all in grace are temples of the Holy Spirit, destined someday for a glorious resurrection. Through your beautiful example, teach me the value and dignity of Christian modesty. Grant that I may never be the occasion of dragging others into Hell, by suggestive words or evil deeds of any kind. Through the merits of your Martyrdom, obtain for me the grace to turn aside from sin, no matter what the cost, so that one day I may enjoy Heaven with you and all the other saints. Amen.
Our Father, Hail Mary, Glory be to the Father, etc.
St. Maria Goretti, pray for us!
(Mantilla nod to Catholic Fire.)
by Mary Rose at 2:07 PM

This is great. Very good ideas about praying this way before a date. None of mine have dated, and we do not encourage any of that. But we're not naive to the fact that one day they'll be interested. And we have three teens in the house! They're very sure of themselves and are good to be solo -- "until they can financially and emotionally handle that kind of commitment" and things like that. The modesty prayers go both ways -- I have four boys and want them to be holy in lifestyle as well as my daughter. I like your blog.

I don't care for the line "he tried to make her sin." If she is foreced to do something against her will it is not a sin.

Mel, God bless you with four boys! I am always deeply touched when I see parents raising their sons for the purpose of honoring God in all things. I'm glad you stopped by and shared your comments. :-)

Angela, I agree with you. I didn't write the description. One site I visited had a bishop say that if she was raped, of course there would be no sin assigned to her.

I just learned about this sweet saint, so I was stunned when I read what happened to her and that she was willing to struggle to the point of death to preserve her purity.

On an interesting note, I don't think it was by accident that I logged into my Facebook account on Sunday to find that was the "Saint of the Day." I love the prayers before a dance or a date. I soooo wish I had those prayers when I was in college!