It's Memorial Day and I have been thinking about our brave men and women veterans who gave up their lives for freedom. It's a big deal to me and should be for every American. Unfortunately, Google doesn't think so. 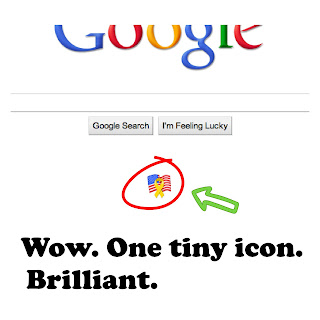 Google has become more creative with their home page design. If you take a look at this, you'll see all sorts of Google logos, celebrating various country holidays (depending on the country), along with innovative animation. (Like the Particle Logo on September 6, 2010 and the Charlie Chaplin Logo that was a clever video.)
It really is amazing to me. We're given Google doodles that celebrate the 50th Anniversary of the Flintstones, the 117th birthday of dancer and choreographer Martha Graham (animated doodle), and Will Eisner's 94th birthday (who?!).

But Memorial Day? Doesn't seem to register with them. I remembered that in 2007, many noticed that Google didn't do ANYTHING to recognize Memorial Day. No special icons or designs to be found. So in retrospect, perhaps we're lucky they even gave us a tiny flag and yellow ribbon.
Surprisingly, Google does recognize Veteran's Day.

But why not Memorial Day?
Bing, who I will now be using as my home search engine page, did acknowledge today's special meaning. 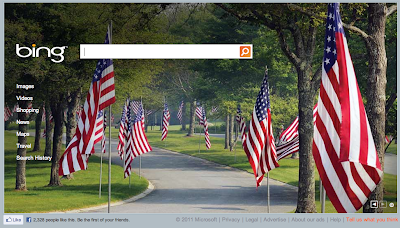 You may ask what the difference is between recognizing Veteran's Day but not Memorial Day? I'll give you my take.
Veteran's Day is to honor the living. Memorial Day is to honor the dead.
Those who gave their life to defend and preserve freedom are dangerous. It's a stark reminder to the world that Americans are willing to die for something, over and over, and over again because it matters.
We honor our dead by setting aside one day to remember the ultimate sacrifice they gave. We honor them by setting aside one day to remember their families, who still mourn, who have lost a son, a father, a brother, and uncle, a nephew, a daughter, a mother, a sister, an aunt, a niece, a cousin, and a grandparent or great-grandparent.
When we remember, something happens inside of us. Our backbone straightens up. Our will becomes steel. We know, beyond a shadow of a doubt, that freedom requires a price and often, that price is blood.
Whenever we, as a nation, remember these things, it creates in us a resolve that few can conquer.
Is it any wonder that a global conglomerate like Google spits upon the graves of our honorable dead?
Yes, spits. It's one thing to totally ignore it. But it's quite another to honor the independence of the world but yet give such pittance of acknowledgement to the brave men and women of the United States of America who often paved the way for those other countries to be independent. I will never forget the purple fingers held up by Iraqi people after participating in their first election that wasn't bought by street thugs.
Freedom rings. Freedom is the cry of every man, woman, and child.
But unfortunately, Google doesn't understand what freedom means. Most likely because the bulk of their art departments are filled with young "twentysomethings" who learned to hate America in their colleges and universities.
Am I making too much out of this? I don't think so.
Because in the course of history, throughout all the wars and battles for the control of nations, corruption did not happen in a day. It happened over time, drip... by.... drip.
Frankly, I'm fed up with Google. Let them play with their computers all they want, hoisting the honored holidays of other countries while stomping on the American citizen's sensibilities. We know who the bad guy is.
I'm bookmarking Bing.

Update on Prayer Request, and Thank You for Praying!

Stephen's condition has improved and I know he had reconstructive surgery yesterday. Before he did, he had remarkable improvement with his condition. So much so that his nurse who first saw him was amazed that he was standing with help and eating pureed foods. He seems to have a little short-term memory loss. He can see out of his left eye but his right eye is still swollen and that may last 3-4 weeks. He said he can see the outline of things.
So prayers are being answered! Thank you for the prayers offered and if you could, continue to keep Stephen and his family in your heart. God bless you richly. :-)
by Mary Rose at 7:25 PM 1 comment: