My Still Life From Long Ago 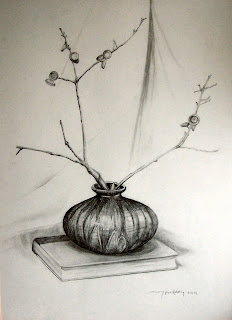 Hilary Jane at Orwell's Picnic reminded me of my own artistic creations, long ago. This was a still life I did in 1992 when I took some art classes from a wonderfully eccentric older single woman who lived in a mansion. (Her living quarters were on the ground floor and she rented rooms on the second floor. Her class studio was on the second floor.)

She would take various objects and throw them together on a table, with a white sheet draped behind it and that would be my "lesson." She was great in urging me to be stronger with my pencil, instead of lightly sketching everything. The dark shadows are the result.
by Mary Rose at 12:33 PM 3 comments:

Email ThisBlogThis!Share to TwitterShare to FacebookShare to Pinterest
Labels: Art

This will be quick. In a few minutes, we'll be going to the hospital where my husband will be having his colonoscopy. It's been almost one year since last year's cancer scare. His tumor was removed and no other cancer cells were found in his body. By God's grace, we pray that today he'll receive a clean bill of health.
We're both a bit nervous, so prayers for him, first and then for me. :-) I know God has everything under control. I ask that we both would be given God's grace to accept whatever is His will. Thank you so much and God bless you for your prayers.
Edited to add: Great news! They found just one little polyp and removed it. The doctor said he didn't need to see Mickey for another colonoscopy for 3 years. This is such wonderful news! Mickey was very concerned, as you might imagine, and of course, so was I. I am deeply thankful for your prayers. I felt the peace of God in the waiting area and knew I felt answered prayer. God bless you guys!
by Mary Rose at 9:34 AM 5 comments:

Are Catholics Returning to the Church More Traditional?

I ask this question because I've been noticing an interesting trend over the past few years. Most of the emails I've received from other Catholics who have returned to the Church have definitely been more traditional. I don't know if this is a result of growing older (and wiser) or if they, like me, had enough of the "non-traditional" style of church.
I think it's interesting. I know that when I came back to the Catholic Church, I wasn't coming back for women's ordination, "social justice," or anything having to do with social issues. I came back for the Sacraments. I came back for the liturgy. I came back because the Holy Sacrifice of the Mass reminds me more than anything else of how far God went to forgive our sins and expresses His desire to make us into saints.
I view the non-denominational churches with compassion, for the most part. I know they're trying their best. My brother now attends one. But what they are unable to give are the Sacraments. If one were brutally honest with the history of the Church, they would understand that there has been an unbroken line of authority that started with the Apostle Peter and continued to our current Pope.
Spiritual authority was pursued diligently by the last non-denominational church I attended. There were teachings, books, CD's, mailing lists, newsletters, and magazines that were devoted to obtaining spiritual authority. Aside from deep Biblical study, the consensus was that in order to receive spiritual authority, one had to be chosen by God ("anointed"), and the requirement for that was having a humble heart.
I've devoted many years to serving the non-Catholic, non-denominational church. Throughout those years, I studied the Bible, prayed, and meditated. I met people who I would say did indeed have spiritual authority. But now that I have returned to the Catholic Church, I will say they can not compare to the Catholic holy men and women I've met since, who have something that seems much more authentic.
In my city, we are blessed to have some amazing priests. Some have just been ordained and are especially inspirational. I realize what a great sacrifice it is to become a priest. And I wonder if it is sacrifice that is truly the "secret ingredient" to spiritual authority?
Jesus Christ sacrificed a great deal during His life in order to bring men and women back to God. His ultimate sacrifice occurred on the Cross. However, without the sacrifice of the Cross, Jesus Christ could not have defeated death. By loving His Father so much and placing obedience to His Father's Word above His own preference, Jesus was glorified. ("And Jesus answered them, 'The hour has come for the Son of man to be glorified.'" - John 12:23)
This to me, is the crux of spiritual authority. We are called to live our lives through Christ, by the power of the Holy Spirit, and to set aside our will so as to embrace God's will. Within the Catholic Church, we have an abundance of saints who did just that. They sacrificed all so that they were able to glorify God.
Sacrifice is a tough word. I learned about it when I was a small girl, within the Catholic Church. Somehow, amidst all the guitar-strumming and the "kumbayas," I was able to grasp that there was something greater required of us as believers in Christ. It wasn't about my needs being met or attempting to right all the wrongs in society; but it about laying aside my preference and seeking God's purpose.
Which brings me back to my original question.
The traditional Catholics I've met understand sacrifice. There is a beautiful humility about them. They're not running around, insisting that their Diocese recognize social issues or demanding that women become priests. They're not complaining when a parish decides to no longer use altar girls. They're not outraged when a parish decides to ban a "gay pride" Mass.
Traditional Catholics are focused on one thing only: becoming holy. It is by this deliberate intention that the rest of society will be affected. Do those who involve themselves with social issues not remember the early Catholic martyrs? Do they really believe that those martyrs were killed because they were protesting the injustice of Rome? Or maybe they think the martyrs were killed because they demanded a redistribution of wealth. Who knows? But I do know the reason the martyrs were killed was because even though it was illegal to be a Christian, they would not deny Christ. And they went to their deaths singing hymns of praise.
Our world is on fire. Those of us with eyes to see and ears to hear realize that now is not the time for insisting the Church try to make everyone happy. Instead, now is the time for us to gird our loins and prepare for spiritual battle.
Because when greater persecution comes, what will give us strength and hope? Certainly not the knowledge that our local parish decided to support some liberal political candidate who is pro-choice. No. What will keep us strong will be our faith in Jesus Christ, our obedience to God, our trust in the Pope and the Magisterium, and our devotion to our Mother Mary and the saints.
I think that is why many have returned to the Catholic Church. And I believe more will come.
by Mary Rose at 9:26 AM 3 comments: