This Is How All Will Know That You Are My Disciples 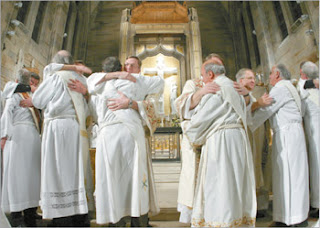 
Sometimes, I feel older than my years.

I just read an interesting post from St. Louis Catholic that I found troubling. ("The World, The Flesh, and the Devil Have Nothing To Fear")

I have always loved God and His Son, Jesus Christ. There has never been a day in my life when I have not believed wholeheartedly in their complete holiness, their immeasurable love, and their compassion for us fallen men and women.

I remember the first time I experienced betrayal within a church. I was so naive that I truly believed that if another person expressed their faith in God and His Son, then we'd just get along perfectly like peas and carrots.

Suffice it to say, I discovered otherwise.

At heart, I am a lover. A peace-maker. I would much rather state "let's agree to disagree, agreeably" than throw flaming arrows of "I'm-right-and-you're-oh-so-wrong" at my fellow brothers and sisters. It saddens me when I see hard, vicious words being thrown toward those who for all intents and purposes, are part of the family.

But, since the theme of this blog is confessions, I'll reveal yet another one about me.

In the fleshiest part of my being, I am a fighter.

Just ask my husband, who at times had to calm me down because of some development that was just... well... wrong. And I wanted to make it right. Whenever I see injustice, or bullying, or people trying to control others, I go sort of ballistic. So I'm not a complete pussycat.

But when it comes to the Church, when it comes to this glorious Body of Christ that is to be considered the Bride of Christ, a gift... and to see her strip down to her skivvies and land on the mat with a sneer and her gloves itching to fly, I know we've gone way off the rails.

For those who are still scratching their heads, I'll lay it out more clearly.

Jesus Christ said that the way people would know we are His disciples is by how we love one another.

Not how we love sinners.

Not how we love the Magisterium.

Not how we love Vatican II.

And not even how we love the Pope.

It's how we love one another.

In all of our ugliness, our sinfulness, our idiosyncrasies that often can drive one another nuts... it is that "fleshiness" we are called to love.

There is the word "catholic" (lower "c") which comes from the Latin word catholicus, meaning "universal."  And then there is Catholic with a big "C." The first time Catholic was used was found in a letter from St. Ignatius of Antioch to the Christians in Smyrna.

He wrote: "Wherever the bishop shall appear, there let the multitude [of the people] also be; even as, wherever Jesus Christ is, there is the Catholic Church." (Ignatius Epistle to the Smyrnaeans)

The Greek word for Catholic is katholou, meaning "entirely, in general, on the whole."

What I get from that is this: unity.

Do you remember the movie Independence Day? If not, it's about how aliens are attacking earth. In one of the most well-loved film moments, Bill Pullman's "President Thomas Whitmore" makes a speech that could very well be applied to our own current times:

The President: Good morning. In less than an hour, aircraft from here will join others from around the world. And you will be launching the largest aerial battle in this history of mankind.

Mankind -- that word should have new meaning for all of us today.

We will be united in our common interests.

Perhaps its fate that today is the 4th of July, and you will once again be fighting for our freedom, not from tyranny, oppression, or persecution -- but from annihilation.

And should we win the day, the 4th of July will no longer be known as an American holiday, but as the day when the world declared in one voice:

Today, we celebrate our Independence Day!


I feel the exact same emotions but for our beloved Church and for one another.

We are fighting the fiercest battle that we've ever seen in an attempt to control humankind. I do not think I am being an alarmist when I say such things. The attempt to control every aspect of our lives is at the heart of an evil plan to destroy the Church, destroy the family unit, destroy freedom, and destroy all that has brought any speck of good into this fallen world.


In my mind, I can hear the above speech like this:

We will be united in our faith.

You will once again be fighting for our freedom, not just from tyranny, oppression, or persecution -- but from annihilation.

And should we win the day, the Church will not be known by its factions, but as the true catholic Church when it declared in one voice:

Today, we celebrate God, His Son, Jesus Christ, the Holy Spirit... and His Church, which the gates of hell shall not prevail against!


Pray for the unity of the Church. And yes, pray for our spiritual leaders. As the world grows louder and more violent in its hatred of Christianity, it is time now to gird up our loins. To pray. To put on the armor of God. To love one another in spite of our differences.

And after having done all, to stand. Because we either will stand together or fall alone. Let's choose together.