The War on the Word "Religion" 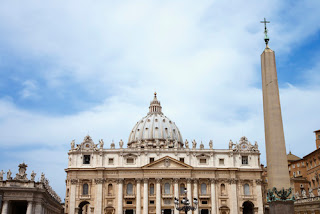 A few days ago, I attended a family event. As I chatted with my nephew, I noticed he was wearing a t-shirt that simply said: Relationship Not Religion.

I've written before about why this bothers me. But it continues to bother me, primarily because I think the anti-religion tone is in essence, anti-Christianity. Now I know that sounds weird. Especially when you see Christians from non-denominational churches wearing such t-shirts or promoting videos like "Why I Hate Religion But Love Jesus."

There is an assumption with this position that the two (religion and relationship) are mutually exclusive. It's as though these Christians believe religion prevents relationship with God, or at the very least, hinders a fuller, richer relationship with God through His Son Jesus Christ. Either a person believes in "religion" (the inference being that religion is dry, regimented, and lifeless), or "relationship," which is preferable and eminently superior to religion since "relationship" infers intimacy, dynamic growth, and mutually beneficial rewards.

Yesterday, as I kneeled during the liturgy in the Traditional Latin Mass, my eyes glanced over to a life-sized Cross with the body of Jesus outstretched upon it. Again, my thoughts turned toward that t-shirt's message and Jesus Christ's message. Suddenly, it dawned on me.

Jesus Christ was a Jew. He was born to Jewish parents and was raised as a Jew, following the Judaic tradition of the Law, which was defined in Exodus and Leviticus. When Jesus walked this earth, He said this, in what I consider one of the scariest scripture verses (emphasis mine):

Not every one who says to me, 'Lord, Lord,' shall enter the kingdom of heaven, but he who does the will of my Father who is in heaven. - Matt. 7:21(RSV)

The "will of my Father" was defined by Judaic law. If we go to the source, God made it clear to the Israelites how He wanted them to behave. He created standards, regulations, and laws for them to obey. That was considered doing the will of God.

So what has changed?

Many Christians believe that since Jesus Christ died on the cross, and rose again from the dead — that the grace that has been generously poured out upon us somehow releases us from the obligations of obeying God's precepts. So it doesn't matter so much if a person decides not to attend church because they "have a relationship" with God that they can nurture at home. This is as much a misunderstanding of the meaning of "grace" as it is the word "religion." Grace has been given to those who believe Jesus Christ is the Son of God who died for mankind's sins, but it does not remove the expectation from God to grow and mature as His sons and daughters in His Kingdom.

These expectations from God do not exist in a vacuum. We just celebrated Pentecost and rejoice that indeed, we've been given a "Paraclete," an advocate who helps us attain holiness: The Holy Spirit. And what does the Holy Spirit do? Convicts us. Teaches us. He helps keep us on the straight path of righteousness.

And what does the Holy Spirit use to do this?

Hmmm. Could it be that He uses religion? A set of institutionalized attitudes, beliefs, and practices?

I believe that Jesus Christ's relationship with His Father was defined by His religion. How could it be otherwise?

The revelation I had yesterday was this: Jesus expressed His love to God by keeping His commandments. And He asked us to keep them, too.

If you keep my commandments, you will abide in my love, just as I have kept my Father's commandments and abide in his love. - John 15:10 (RSV)

By this we know that we love the children of God, when we love God and obey his commandments. - 1 John 5:2


Religion is our committed response to having a relationship with God. The two are not mutually exclusive. In fact, religion is a strong foundation for allowing me to know God and love Him. By understanding and obeying His statutes, by implementing that understanding in my adherence to a set of beliefs and practices that are consistent (and have been since the birth of the Church), then I am secure in knowing I am on the right path toward heaven.

All of which tells me that religion binds us to God. It grounds us. It give us the strong foundation we need so that we don't chase after every fleeting worldly philosophy.

When someone says "Relationship Not Religion," it sounds good but is ultimately at risk for selfishness. Religion demands something from us. To a certain extent, so does relationship but relationship without principles ends up serving no one other than desires of an individual.

"Relationship Not Religion" veers dangerously close to relativism. How?

The assessment for how well a relationship is working depends on what?

It's all relative. We've already seen this when some Christians actually say something along these lines: "What may be a sin for you is not a sin for me." And then that's followed usually by a discussion on what this person's relationship is with God and that it's unique and different... yada, yada, yada. There are no standards to uphold because it's all relative.

Well. I think I've vented enough. I may touch upon this topic again, though, because I've seen it too many times. I think it is a dangerous belief and, not aligned with what we know of God. Of course God created man for relationship — first with Him and then with others. But to say that relationship is diametrically opposed to religion is wrong.

If Jesus honored religion by abiding by its practices, how can we not do the same?