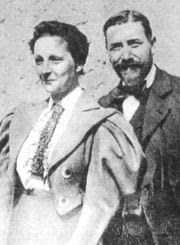 Last year, Angela M. (Where Angels Blog) introduced me to Servant of God, Elisabeth Leseur. I had no idea who she was at the time, but I quickly became entranced by her story.

Elisabeth was a devout Catholic. She married a Catholic man, Felix Leseur, whom she discovered shortly before they married that he was no longer a practicing Catholic. Felix became a doctor, and eventually, an anti-clerical, atheist. Although he assured Elisabeth that he would not interfere with her faith, he ended up belittling it, even going so far as to try to destroy it.

Elisabeth was undaunted. She dutifully read a book he gave her, his intention being to draw her away from her faith. He was shocked to learn that she only found a lack of substance in the book and became even more devoted to Christianity. Their home soon had two libraries - his was full of book about atheism and hers was filled with the lives of the saints and the Catholic Church.

In 1912, at the age of 46, Elisabeth was diagnosed with breast cancer. During a conversation with Dr. Leseur about death, she said, "I am absolutely certain that when you return to God, you will not stop on the way because you never do things by halves.... You will some day become a priest." To this he responded: "Elizabeth, you know my sentiments. I've sworn hatred of God, I shall live in the hatred and I shall die in it."

After she died in 1914, Dr. Leseur discovered a note written to him in her papers. It said: "In 1905, I asked almighty God to send me sufficient sufferings to purchase your soul. On the day that I die, the price will have been paid. Greater love than this no woman has than she who lay down her life for her husband."

Dr. Leseur intended to visit Lourdes with the intention of writing a book to discredit it. But after he was there, he became deeply convicted by the sacrifices his wife had made on his behalf, and it led to contemplating what Jesus Christ had done for him. Not too long after, Dr. Leseur's resistance to God crumbled. In 1919, he became a Dominican novice and in 1923, at the age of 62, he was ordained. He became an inspiration to Archbishop Fulton Sheen, who frequently referenced the redemptive story of the Leseur's as an example of how marriage can sanctify a spouse.

Fr. Felix Leseur spent 27 years traveling and preaching about his wife's spiritual writings. What an amazing testimony of sacrificial love and grace; and how astounding to know that such a man eventually became a spiritual director for an Archbishop. God bless Fr. Leseur!
by Mary Rose at 5:27 PM

That is an incredible story! I have never heard of her before. Did you read a book on her? I am wondering if there is a good one out there and where to get it.

PM - lots of books on Amazon - she wrote a diary among other things.

MR - glad to know the Leseurs are still busy working on your behalf!