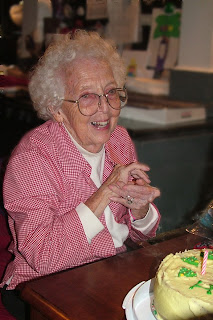 Reverent. Sober. Good. Sensible. Chaste. Domestic. Kind. Submissive.
Those all live under the umbrella of wisdom. I started to ask God to bring such women into my life. One was Elisabeth Elliot, who ironically has a brother who converted to Catholicism and wrote about it. (Thomas Howard) Elisabeth has the heart of a Catholic although she is Evangelical. But she is full of wisdom.
I didn't find too many older women in the non-denominational church. I had to find them through books and tapes. And even though I had left the Catholic Church, there were still "older women" and saints I followed who kept the faith. Mother Teresa and St. Teresa of Avila were two I especially loved.
We need old people because we will always need to be taught the right way of doing things. The old people have gone down the road and learned how to avoid the potholes. It helps to listen to them. You also learn that although emotions are wonderful, you need to consider other things when making choices. There is a rich, deep vibrancy about old people that often is missed because our culture only focuses on the shallow things. Old people are definitely not shallow. Like an old river that runs deep, so are old people within the Catholic Church.
Are there old fools? Of course. There are some older people who never seem to acquire wisdom. They're the ones running around, trying to act like their twenty years younger. Some women are like this. They so fear aging and appearing undesirable that they go to great lengths to dye their hair, get plastic surgery, and gallop through life wearing a mini-skirt to prove otherwise. Those are not the "Titus Women" I want.
I also think that the Catholic "dignity of life" extends especially to old people. Not only is the Church concerned with those just born, but those who are close to dying. There is indeed a respect for life that spans across the demographics. Thank God for the Catholic Church, who champions the cause not just of the unborn, but those who society would like to shrug off, as though our old people are some type of nuisance.
So this past Sunday, when I looked around and saw all the beautiful gray heads, I felt love and appreciation swell within me. I thanked God for them and asked that He would provide for them and watch over them.
Because our sad and shallow world needs them more than ever.
by Mary Rose at 5:32 AM

Knights of Columbus is like that on a smaller scale: we have men from 18 years old to 95 who are active and work together on numerous projects in and outside of the parish.