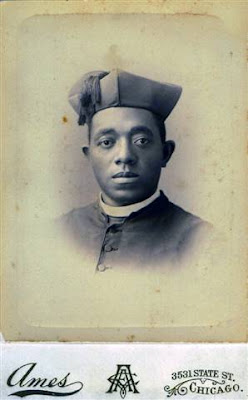 Last year I learned of Fr. Augustine Tolten. I couldn't imagine the difficulties and challenges he must have faced; from being born into a slave family to becoming a beloved priest in Chicago. What an amazing love he had for God and His Church, as he diligently pursued his vocation in spite of the incredible opposition to prevent him from doing so.

Fr. Tolten was born in 1854 and died at the age of 43 in 1897. He was baptized in the Catholic Church and tutored by the slave owner's wife. He desired to learn more, but was often met with prejudice. As a young man, he was a janitor and was able to attend clandestine classes taught by priests and nuns who recognized his love for God and assisted him in his vocation. When Tolten was rejected by every U.S. seminary he applied to, even to the one who was training priests to reach the 'Negro' population, these same priests and nuns helped Augustine Tolten travel to Rome where he was able to attend a seminary and was eventually ordained.

He was told his first mission would be to the Negroes in America. When he came back to Quincy, he began his ministry and quickly attracted a multi-racial congregation, drawn by his excellent sermons and educated, eloquent voice. Soon, there was jealousy - both from other Catholic priests and even Black Protestant ministers. Fr. Tolten eventually moved from Quincy to Chicago, where he served at St. Monica's until his death.

It's an amazing story of God's grace and provision. Rest in peace, Fr. Tolten, and may perpetual light shine upon you.

From Slave to Priest by Caroline Hemesath
by Mary Rose at 6:01 AM

*runs back into lurkdom*

You're the best! I don't know if it's because it's Friday, or I haven't had enough coffee but I've already made several typos today...LOL! Thanks for coming out of lurkdom to help me out. :-)

Its great the way Fr. Tolten inspired so many others and helped to break prejudicial barriers regarding race. With his excellent sermons he reached out to all who gathered in the Lord's name.

God be with you.