What The Second Vatican Did To Catholicism: Blurred Identity Leads to Confusion #Catholic 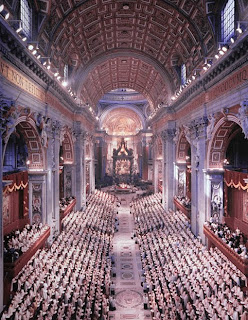 Since returning the the Catholic Church, I quickly noticed the ongoing debate about the strengths and weaknesses of the Second Vatican Council. For those who have been reading my blog over the past year, you know my opinion. I have fallen into the camp of those who believe that the Second Vatican Council, for all its good intentions, has failed in its mandate to propagate the Catholic faith to her children.
I am one of what may be thousands who wandered from Catholicism into the transient world of non-denominationalism. Because a strong identity was never instilled in me, I tried to find it elsewhere. Because I didn't know what my faith stood for, I searched to find the truth that in essence, was already within me. The more I learn about my Catholic faith, the more I mourn the loss of what I was denied. The cost of implementing a strategy that stripped Catholicism of its sacred role was high. Too high. Not only has the Second Vatican robbed many "Cradle Catholics" of their birthright, it opened the door to political thought and action that has led to the ruin of the United States of America. (video) "Catholic" politicians who are really CINOs (Catholic In Name Only) repeatedly fail to represent Catholic doctrines such as pro-life and the sanctity of marriage.
Worse, some of our spiritual leaders, our bishops, have also failed to declare Catholic doctrine and hold Catholics accountable for supporting abortion and gay marriage. Of all religions in the world, Catholicism should never capitulate to fear. We are the religion that others love to kill and stood strong in the face of martyrdom. When I think of those saints who were fed to the lions as a roaring crowd approved - and then think of how some Catholic politicians cave like a house of cards to pressure from certain groups; my stomach turns. The CINOs weak acquiescence to evil shames the sacrifice of our Lord and Savior, Jesus Christ.
Months ago, my twentysomething cousin and I were talking about men and dating. She was exasperated over the difficulty of finding decent men to date. "Where did all the 'real men' go?" She asked. My answer: "Feminism killed them off." Of course there are still "real men" around, but not as many as there could be if feminism hadn't infiltrated our classrooms, continually punishing boys for being boys. But the same question could be applied to our Church - where has "Real Catholicism" gone? Because as I read the Catechism of the Catholic Church, I can vouch with certainty that its not found in "diversity" churches that celebrate active homosexuality, abortion, and Marxism.
What have we lost? In a recent article in the Wall Street Journal, Stephen Prothero, a professor of religion at Boston University, pinpointed the problem (emphasis mine):

The great religions have long pursued different goals through different means: Christians sought salvation through faith or works (or some combination thereof), while Buddhists sought nirvana through meditation or chanting. So a century ago jumping from a Catholic Mass to an evangelical revival to a Buddhist retreat would have felt like leaping across vast chasms. But contemporary Americans know almost nothing about their own religious traditions and even less about the traditions of others. Most Americans cannot name any of the Four Gospels, and an overwhelming majority admit to being wholly ignorant of Islam. So we shuffle from one to the other with little sense of what is being lost (or gained) in the process.

How I resonate with that last sentence! In the course of the years I was away from the Catholic Church, I was a member of: a Presbyterian church, a Baptist church, the Vineyard Christian Fellowship, and a charismatic, prophetic church. Within each church, I sought to deepen my faith, grow closer to God, and serve others. I did gain much, but yet was I really gaining something new or simply acquiring what my Catholicism already possessed, unbeknownst to me? I believe now it was the latter.
I struggle with feelings of bitterness toward the Second Vatican because I know I'm not the only one who has been affected negatively by it. So many Catholics my age left the Church in the 70's and 80's because what we were given was a pale representation of our true faith. Think of this: our Catholic faith, which had stood firm for hundreds of years - providing spiritual nourishment to some of the greatest individuals who ever walked this earth, creating amazing institutions such as schools, universities, and hospitals, this faith that has such an honorable heritage in history; has been relegated to a political machine. Those of us who know our faith understand that this world is passing away - including all the political machinations it has borne. True security only lies within our relationship with God. That sacred relationship is protected and educated by the Catholic Church. Take the word sacrament. It is a Middle English word, from Anglo-French and the Latin word, sacramentum, which means: oath of allegiance, obligation, from sacrare to consecrate.
So not only do we revere and worship the consecration of the bread and wine into the Real Presence of Christ, we ourselves are being consecrated through the sacraments of the Church. We are taking an oath of allegiance to our God and accepting an obligation to be the Body of Christ on earth. When you really, really think of the profound meaning of this sacred relationship, it should give you pause.
Now where has this understanding been taught? Within a Mass that has huge puppets bouncing down the aisle? From rainbow banners thrown festively around "the supper table" altar? From Extraordinary Ministers of Holy Communion dressed as devils and witches for a Halloween Mass? No, no, and no.
We have lost the sense of the sacred relationship we have with God through the power of the Holy Spirit and the sacrifice of His Son, our Lord and Savior, Jesus Christ. This is why I believe there is a resurgence with the Traditional Latin Mass. There are more and more Catholics who are starting to wake up and say, "Wait a minute. I need the sacred in my life. My relationship with God isn't the equivalent of attending a circus. What is needed is reverence, silence, and pauses to ponder the greatness and awesome glory of God." What the Second Vatican Council did was bring the worship of God to the level of consumerism instead of lifting us up to the level of holiness. Only when we behold God in all of His glory, are we transformed. This doesn't happen when a priest is dressed as a clown.
Style will always be up for grabs and fodder for endless committee meetings. What the Catholic Church needs now more than ever is clarity, a strongly defined identity, and a re-embracing of our clear mission. Jesus Christ never said that making disciples would be easy. But He was clear on this: We are to teach what He has commanded. Not what godless political machines think we should teach.
by Mary Rose at 11:54 AM

Email ThisBlogThis!Share to TwitterShare to FacebookShare to Pinterest
Labels: Holy Sacrifice of the Mass, Latin Mass, Vatican, What I Love About Catholicism

Absolutely excellent!! I have been having major struggles over this whole thing. Most of my conclusions are the same as yours.

Another convert chimes in. I guess I musn't be a card carrying traditionalist because I tend to see the problem not as Vat2 itself but how it was high-jacked by the left and doctrinally unorthodox.

I am another returnee who agrees with you but what can we do? Here in my diocese in NZ it's
impossible to get to a devout and reverent Mass. I am considered over-pious because I kneel at the consecration! What can we do? I pray...and pray...and pray. His power is greater than the evil that is being done in his name. So get on your knees folks, it's the best we can do!

I have to agree with Saintos. Vatican II was not the problem. The problem is those with an agenda hijacked the findings of the council. The new mass is from these people. The stripped down, ugly churches are from these people, who said they were working from the "spirit of Vatican II" when Vatican II called for no such thing. The loss of Latin was because of these people.

The support of abortion from prominent Catholics came from these liberal priests who convinced these Catholics, like the Kennedys, that they could biblically support both abortion and Catholicism and reap the monetary rewards and power.

It is these "Catholic" priests and "Catholic" doctors who publically dissented on birth control and started a whole culture of dissent when lay people were told by these priests birth control would be allowed - it was just a matter of time - and when it wasn't all heck broke loose.

It is these people, with strings of letters after their names, that convinced the lay faithful they could have their cake and eat it too, no suffering involved.

MR, excellent take. Was just discussing something of a similar nature with my childhood priest (whom I tracked down after 30 years!). Unfortunately, as with any other denomination there are those who, even while in the midst of the demonstrably faithful, will continue to try to remake the faith in their own image. This has been the case from the beginning of time.
While I don't entirely blame Vatican II, I do think that was a turning point. It opened up a world of misunderstanding and avenues for incorrect doctrine. The fact that there are soooo many of us V-II babies returning to the Church after decades of seeking God in protestant circles suggests that, although our Christian education as young Catholics suffered greatly, God has so marked our hearts that our generation is beginning to realize what has been stolen from them. And in that realization, are demanding that TRUTH be repaid. This can only portend good for the Church.