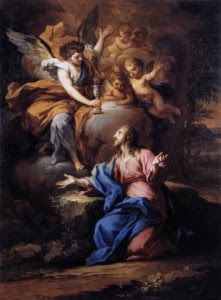 Fr. Zuhlsdorf (affectionately called "Fr. Z" by his followers), has an excellent post about the new translation of the Roman Missal and how it's driving the liberals apoplectic.
It's a very funny post, complete with calling the Sour Grapes Brigade, "Vat-Trads." (Many Catholics who prefer the Traditional Latin Mass are often called "rad-trads" by those who sneer at Catholic tradition.) Since my return to the Catholic Church, I've been absolutely amazed by the level of defiance toward the Magisterium. It's bad enough to have the laity nurse such resentments, but to have the clergy encourage it is to me, shameful.
For whatever reason, one of the "faith lessons" I learned during my years within the non-denominational churches was submission. I remember listening to Elisabeth Elliot on her radio show talk about women and submission. She was the only Protestant woman brave enough to not only talk about it, but promote it. (By the way, she is the sister of Catholic convert Dr. Thomas Howard.) I knew it was a profound lesson and one I needed to learn, to live, to embrace fully. I knew there was a secret to submission that would reveal something that God wanted to remove, which after some time, I realized was fear.
Because within submission, there is trust.
That, my friends, is where I feel the dissidents miss a huge component of our faith. There is a lack of trust in leadership, and ultimately, in God. Why else would they so willingly pursue empty philosophies that offer them nothing? Why else desire the elevation of flesh when the death of it is commanded by our Lord, and then miss the glorious new life that is the joyful consequence of that death?
Fear.
Fear of letting go of control, fear of not being loved, fear of not being validated. And all of those fears are exposed when one submits. Now I'm not saying this is easy to do. Quite the contrary. I'm still given the opportunity to submit in many ways and it is always, always a reminder to me to trust in God, that He knows what is best and has a plan. His will is always a much better choice than following my own.
Years ago, there was something called "The Shepherding Movement" within many churches. It was submission turned on its head. The church members were dominated by leadership. They couldn't make a decision such as buying a car or home without getting permission from their pastor to do so. It wounded many and caused them to distrust leadership because as you may have suspected, leaders took advantage of it.
There are many difficult choices for the Christian as he or she lives their life. Sometimes you have to walk away from an unhealthy or disobedient church. I did. But it's important to remember to keep those who are disobedient in prayer. Still, I have never understood people who deliberately remain within a group or organization with which they disagree. Why not find a group that shares your values?
Unfortunately, Catholic dissidents (who include some clergy), find some level of satisfaction in remaining within the Church while venting their poison to all who will listen. Jesus mentioned that the tares grow along with the wheat. But does the wheat worry about the tares around it? No. It does what wheat does and keeps growing.
I have to remind myself of this sometimes, because it is too easy to wish such people would leave the Catholic Church and head toward the Anglicans. (And many of them would quickly wish that the more traditional Catholics would leave, too. But where would we go?!) I believe the pendulum is starting to swing back and more Catholics are realizing that who we are as Catholics needs to be rooted in our history. Trying to use modern society as a yardstick for Catholic identity has only resulted in a diluted faith and confusion.
Now I'm trying to figure out Catholic identity. I don't believe it can be found within dissension, but in trusting the centuries of godly leadership that the Catholic Church abundantly had, (and still has) but that a small, noisy segment of our current society is trying to block.
To steal the motto from Glenn Beck, I say this to Catholics: Remember who you are. We are the Church that the enemy cannot destroy if we continue to trust, and have faith. To those who are liberal, I say take the leap. Trusting is a much greater adventure than complaining any day of the week.
by Mary Rose at 9:00 AM

One of the reasons I avoid so many "Catholic" blogs now is the bickering and name calling.

I also avoid any involvement with our parish. Indeed - we really don't have a "parish" in that sense of the word. My husband and I call ourselves "the wanderers."

We go to both the NO Mass on Sat. evening and the EF at the FSSP chapel on some Sunday mornings.

Great Post! Having faith in the Catholic Church's traditions is very important.

Adrienne, I understand. I've avoided one blog in particular because it just gets nasty. I'm glad you and your husband have an FSSP chapel nearby. That's awesome! I'm not picky about the NO because I figure at least someone is attending. It really is up to us to receive what the Lord has for us during that time.

Teresa, to me, tradition is what holds us together. I love traditions! (Hearing "Fiddler on the Roof" now!)

The NO Mass we attend is celebrated by an 80 year old priest and THERE IS NO CHOIR! Ooooops - didn't mean to shout but that's a huge thing with me.

There's lots of "history" with the FSSP chapel. Most of the folks are from the SSPX church here where we used to go.

When we left SSPX we were taken in by the local NO parish where the SSPX folks proceeded to make complete asses of themselves for about 8 years before they managed to get an FSSP chapel started. It was beyond ugly! So now we just keep our distance from everyone.

The good news is the FSSP priest will not put up with one tiny little bit of "rad-trad" behavior and is forever smacking them back into shape. He even using the term rad-trad from the pulpit when necessary. It's a hoot to watch since he's only about 5 feet tall.