What I Love About Catholicism: Catholic Men 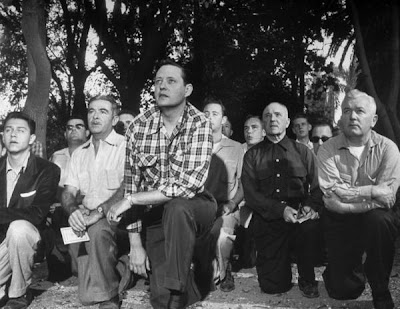 Months ago, I wrote about loving Catholic women. (It's here, if you'd like to read it.) Just recently, I realized I hadn't written about Catholic men and goodness, it's high time I give honor to where honor is due.

For some reason, even when I was away from the Catholic church, I would look at Catholic men with a great degree of admiration. There was something substantial about them. I'll even go so far as to say that in my eyes - Catholic men are real men. The ones who embrace Catholicism fully, with no apology for looking to Rome and submitting to the Magisterium. They are usually men with a backbone. I liken them to the Marines. There is a blend of respect, acceptance, and resolve that Catholic men have that sets them apart from men from other churches or denominations.

If you notice, these type of guys are the ones who will fix a flat tire for a woman, who will go out of their way to make sure their wives get a breather every now and then, and will pitch in and help on a Saturday if their parish needed them. They're helpful, loyal, and persevering. In fact, in another age they would be considered the most noble of knights. There is a noblesse oblige in their life. They have been given much and realize the importance of giving back.

I love seeing the men serve at Mass. Maybe it's because for so many years, I saw women do most of the work within a church service. I especially enjoy seeing adult men as servers for a Traditional Latin Mass. It just touches me.

In our society, men have often been pushed to the side so women can have their "rights." Equality and all that. But yet in this rush for equality, there has been a deconstruction of masculinity. Men haven't been appreciated for being men. Instead, they've been demeaned, ridiculed, and mocked. I've seen far worse treatment of men by women by the same women who had complained of being "mistreated" by men. Some equality.

Catholic men take it all in stride. Maybe I'm partial to Catholic men because my father exhibits these traits. He was the one who would correct my brother and I if we acted up in Mass. He was the one who made sure we attended Mass. And he was the one I'd occasionally catch a glimpse of early in the morning, kneeling in prayer. I remember how proud he would be if we were asked to bring up the gifts for offertory. There was nothing "wimpy" about him nor his devotion.

I'm noticing lately how many of the male radio show hosts I listen to are Catholic. I didn't realize Bill O'Reilly is, but evidently, his latest book is about his Irish-Catholic upbringing. Then there is Sean Hannity who demonstrates the traits I just mentioned. Strong and hardy men. They have grit.

Our world needs such men more than ever. I pray that God raises up the type of men who will not flinch in the face of opposition, because I believe we're going to see an increase of it. May God bless all the Catholic fathers who are trying to raise their sons to be faithful servants of God. Your commitment is a shining example to all around you that to be a real man, you need to worship a real God. Fight the good fight, good honorable men.
by Mary Rose at 6:37 PM

You know what really gives me goosebumps - a man praying the Rosary.

Sure wish you had chosen two authentic Catholic radio star men. Both O'Reilly and Hannity need to go to confession and confess their pride. Both at the time of the priest scandal were angry with the Church because it didn't act the way they wanted it to when they wanted it to. Hannity is pro-contraception and tried to lock horns with Father Eteneuer of HLI on the air and lost. No he still hasn't apologized to Father.

I would add "TRUE" Catholic men. The ones who are unapoligetically Magisterium faithful. They are fantastic!

Hello girls, and Jim too I guess. Well, here's a post for you then.

Catholic men are more inspired to be true Catholic men when their priest/bishop is a real man. The kind of man troops rally behind, and will follow into battle without delay or concern. I'm fortunate to know two such priests, and I'd follow them into the jaws of Hell if need be. Such priests/bishops are the most Christlike.

What a beautiful, wonderful post. My husband's faith makes me appreciate and love him more every day. (We're Roman Catholic)

This also makes me think of my grandfather, who is a convert, a strong Catholic, and an acolyte.

The first commentor mentioned how wonderful it is to hear a man say the rosary. I agree. I enjoy the rare chances that I get to hear my own physician lead a rosary, to hear our caregiver say Jesus' name over and over.