Abortion, Liberalism, and the War on Creativity 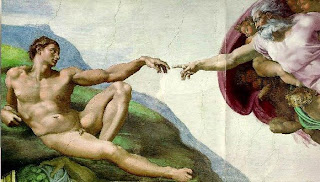 For those of us who are Catholic, the pro-life movement is a part of our DNA, in a manner of speaking. Pope John Paul II spoke of the "culture of death" when referring to those who promoted abortion and euthanasia. He preached the church's belief that all human life is sacred. When I was away from the Catholic church, I still held firm to my pro-life beliefs and was proud of the Catholic church for never backing down when it came to this often contentious, and controversial, topic.

I have heard some say the Democrats consider the issue of abortion as their "sacrament." I don't think it's fair to say every Democrat is a rabid advocate for abortion, but enough of them have supported a woman's "right" to kill her unborn baby. From the many years I've observed Liberalism and its bizarre quest to forcefully convince women to go completely against their natural instinct to protect life; something has been nagging at me. I felt there was something more to this push toward annihilation and finally, I think I'm seeing the bigger picture.

Other dear souls who have been in the trenches, fighting for pro-life issues, will most likely have already come to this conclusion. I will admit that I have not read books, or articles, or even visited pro-life websites, so the thoughts I present to you today may well have been articulated by others. With that said, here is my revelation:

God created man and woman, and gave to them the ability to create life. It is an awesome and humbling thing. Two people are required to create one life, so it is never a solo act, vulnerable to the ego thinking it's a pretty smart cookie to come up with a little baby all on its own. Now aside from the hideous experiments that science is conducting in the name of "progress," this pattern is sacred. Sex was never about the other person getting "pleasure" but about continuing God's creation. God wanted Adam and Eve to multiply and they did.

Each person is God's unique creation. No one on earth has a clone. We are all different. We share the same features of the human race - eyes, ears, and a nose. But yet we are all different, with unique fingerprints and a set of physical traits that make us authentic, original. Even twins, triplets, quadruplets, quintets, sextets, septuplets, and octuplets all have unique traits that are theirs alone.

I have often sat in a mall or some crowded venue and just "people watched;" amazed and in awe by the diversity of the human race. How enormously creative God is! His creativity is endless, giving life to this earth over and over again throughout the decades, centuries, and millennia. I still cannot believe how anyone can think of life and be apathetic, or tragically, see it as an 'inconvenience.'

This past week, it came to me that abortion isn't just about killing off those babies who are "inconvenient." It is a strategy straight from the pit of hell to destroy mankind. I saw a connection between those who politically feel it is "for the common good" to control society by placing government as the sole source of supply; and the attempt to stifle creativity by killing off what can be seen as human capital.

Satan hates creativity. He hates it with such viciousness that he will do everything in his power to destroy it - for in destroying creativity, he destroys life. The two - life and creativity - are inextricably joined. One cannot survive well without the other. For instance, to live freely is to have the opportunity to exercise your creativity. To be creative, fully creative, you must be aware of living. As an artist, I know that I am most creative when I am aware of my surroundings and thoughts. Artists create from their interpretation of life. An artist's heart sings the purest when she is completing perfectly the vision that is in her soul.

Think of all the songs that have been sung! The songs yet to be sung! Then think of all those unborn babies, whose voices have been silenced; never having been given the chance to sing or teach someone else how to sing.

It is far easier to control a group of ten people than it is a thousand. It is easier to control a people who don't believe in singing than those who understand the vital importance of it. There is a connection. Abortion is meant to kill creativity, plain and simple. Liberalism is a ghastly philosophy that on the surface, promotes the "rights" of others. But underneath the surface, it is all about control. In lying to women that the issue is only about them, they have successfully guided them to a godless, selfish world that leaves a woman wide open to being controlled. Except it's not an abusive partner abusing them - it's a government agency that pretends to have her best interests at heart when in reality, nothing could be further from the truth.

If you ask anyone who is a musician, an illustrator, a dancer, an actor, or a chef to name the most difficult thing about being creative - chances are they will say it is difficult to focus and produce. When they lock themselves in solitude, intent on creating, it seems the world crashes down upon them with a multitude of distractions. It is always a battle to create. In another way - it is "labor." Writers don't call the effort of writing a book "birthing" for nothing. The creative process is very much like creating a baby. There is the "conception" of an idea, its gestation, and then finally, its birth. Because you see, creativity is life.

Creativity can only flourish in a place where freedom reigns. And abortion, is meant to silence that freedom. We must not allow life, and creativity, to lose.

God gave man free will. In this, He gave man the ability to make choices, even the choice to damn himself eternally. With that freedom, man has the ability to either give life, or death. There has been an ancient battle not only for the soul of man, but against his God-given right to exercise his free will.

There is no freedom in abortion, no matter how hard the pro-choice people try to spin it. It is killing a life that God has created. The baby never has the opportunity to exercise that free will. It is diabolical control at its most evil.
by Mary Rose at 5:00 PM

Such an insightful post, Mary Rose, and I thank you for sharing it with us.

Coming at it from such a creative angle. Truth will always rise to the surface...

You hit the nail on the head.....The father of lies has turned modern women into his puppets when they say, nobody can tell ME what to do with MY body!

Thank you so much for this - an excellent post!