Do You "Eat and Run?" Thoughts on the Holy Eucharist 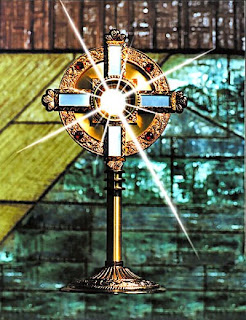 As some of you know, I was recently released on Easter Sunday to begin receiving the Holy Eucharist again. You can read about this memorable day here if you're not familiar with my story. (My husband's previous marriage needed to be annulled before it could be convalidated by a priest and our marriage then recognized by the Roman Catholic church.)

I knew that during my period of waiting for the Declaration of Nullity to be completed, I was being given a "gift of time." The Lord wanted me to thoroughly examine my relationship to the Holy Eucharist, knowing my doubts which were shaped by years of "anti-Catholic" beliefs. I always cherished "The Lord's Supper," or "taking Communion." But even as a young girl, I had a difficult time with the concept of transubstantiation.

However, during the years away from the Catholic church, I would always notice if a new church I was visiting practiced celebrating Communion or not. I was bothered by the fact that so many non-denominational churches did not honor Jesus' words to His disciples when speaking of the bread and wine becoming His Body and Blood, and that we were to do it to remember Him. How could any church miss something so simple and straightforward as celebrating Communion?

I knew of very few churches that believed it was truly Jesus' Body and Blood. There is such sacredness to this act, but if a church celebrated Communion, it was treated as symbolic, nothing more. I again share the revelation I had on Easter Sunday - that if indeed the Holy Eucharist is the true Body and Blood of our Lord Jesus Christ, then it is no wonder there is such a spiritual battle to deny this truth. Of course the devil doesn't want people believing it. Because when you do, powerful things in the Kingdom of God happen. The devil certainly doesn't want a bunch of Christians walking around, spiritually aware of the incredible transaction that just took place during Mass.

So, as you can see, my mind and heart has still been pondering the ramifications of the Holy Eucharist. And, sadly, its abuse.

When I was a little girl, my parents would never have dreamt of walking out to the parking lot after receiving the Holy Eucharist. I now cannot express enough my deep gratitude for this practice. I would watch other people receive the Holy Eucharist, and then instead of walking back to their pew, keep on walking toward the back of the church. I turned to watch them walk right out the door into the parking lot. At the time, I thought they were rude, but that was the extent of it. Now I'm afraid that those who do this are lacking in their understanding of what just transpired.

Is our life so hectic and stressed for time that we cannot take a few more minutes to ponder our Lord Jesus Christ's sufferings and the rewards His Father bestowed upon Him? After we receive the Holy Eucharist, we are given the opportunity to kneel in silence and... ponder. Meditate. To absorb what just happened and that we have the Living Bread of Life within us.

Recently, I found one of the most beautiful prayers I have read on the Internet. It is Padre Pio's prayer after receiving the Holy Eucharist. You can read the prayer here. In fact, I loved it so much that copied and printed it onto an 8 1/2 x 11 piece of paper and took it with me to Mass on the Second Sunday of Easter. After I received the Holy Eucharist, I prayed that prayer. I think this prayer would benefit everyone and I may just make copies of it and pass them around to those interested. (Although I'd like to have it in the size of a prayer card for easier transportation.)

When people receive Holy Communion and then head to the parking lot, they are robbing their spirit of the opportunity to meditate upon the relationship Jesus Christ has with them. Jesus said when we took bread and wine, we were to remember Him. I can't imagine there is much room in a person's mind to truly obey this directive when one walks out the door, focusing on the "what's next" in their day.

I don't mean to sound harsh with these words. But we're heading toward difficult days and we need the treasures of these reflections more than ever. We need to be nourished by our Lord Jesus Christ and the spiritual strength that His Body and Blood imparts. I just may be spending a few extra moments after Mass has ended to continue absorbing this magnificent gift.

For those who may be in the place where I used to be a year ago, I suggest studying the Gospel of St. John, chapter six. Think about what Jesus is saying to His followers and how many He lost when they couldn't believe what He was saying. Would Jesus give such importance to the celebration of taking Holy Communion of it was "just" bread and wine? Would He have made such a drastic statement about there being "no life in us" unless we received the Holy Eucharist for what He said it was: His flesh and blood?

So Jesus said to them, "Truly, truly, I say to you, unless you eat the flesh of the Son of man and drink his blood, you have no life in you; he who eats my flesh and drinks my blood has eternal life, and I will raise him up at the last day. For my flesh is food indeed, and my blood is drink indeed. He who eats my flesh and drinks my blood abides in me, and I in him. As the living Father sent me, and I live because of the Father, so he who eats me will live because of me. This is the bread which came down from heaven, not such as the fathers ate and died; he who eats this bread will live for ever." This he said in the synagogue, as he taught at Caper'na-um. Many of his disciples, when they heard it, said, "This is a hard saying; who can listen to it?"
St. John 6:53-60

Our family, as converts, find unsettling the endless jibber jabber that takes place before, after and - God help us - sometimes during the Mass (esp at the opening "meet and greet" and again at "the sign of the peace". Each of those could be topics for blog rants.

But worse than this is the matter you are writing about here. I was remarked to ill response, "The Eucharist isn't fast food."

Right before reading your powerful post, I was over at Vultus Christi and found Fr.Mark's prayer of Adoration. I was so moved by this prayer I posted about it and posted his prayer as well. It makes reparation for many of the things you have written about and more. The prayer you cited by Padre Pio is one of my favorites.
I am always amazed and saddened by the lack of reverence during Holy Communion. If we only knew...

Congratulations on your convalidation! A technical question...did you need to provide an original of your marriage certificate, or was a copy okay? I'm having a debate with a friend over this; she says only original will do, I say copy is fine...I keep forgetting to ask the priest what the canon law says...