What I Love About Catholicism: Defender Against Relativism 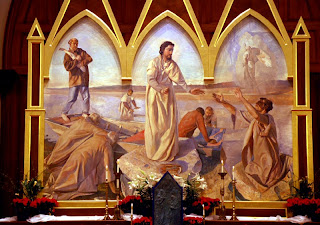 Recently, I heard a wonderful teaching through my local Catholic radio station while driving home from a dinner for my father-in-law's birthday. The teaching was so good that I regretted not hearing more of it. However, I heard enough to inspire me in my own path toward holiness. The next day I called the radio station to find out the program, "Foundations in the Faith," was a series of reflections by a local priest, Monsignor Frank Lane, pastor of St. Margaret of Cortona.

Msr. Lane is wonderfully deep and his teachings are substantial. Throwing references toward Origen and St. Benedict, among others, it is evident he has studied church teachings and philosophy extensively; much to my great delight. This, my friends, is a good part of why I returned to the Catholic church. Teaching that is meat - and not milk, is what Catholicism does best. And it does it so well because of it's unwavering commitment toward creating saints out of sinners.

Msr. Lane spoke about the "tyranny of relativism." In essence, he was confronting the dangerous ground of New Age thought that claims salvation is by whatever channel you desire. As Jesus was tempted by the devil in the wilderness to test God's love for Him, so we are tempted to take God's goodness for granted, His extension of grace and forgiveness that is always available to His children.

The danger of taking God for granted is falling into what Msr. Lane calls "the sin of presumption" and that by doing so, we become careless about how we live our lives. "Universal Salvation" is a dangerous belief because it means "we need not take seriously the Word of God." We need not strive toward holiness because gosh - "I'm okay, and your okay" just as we are. There is a presumption that as long as people are "trying," (and by that Msr. Lane pointed out the whole "This is my truth" statement commonly claimed by someone who considers themselves 'spiritual') then God, who is a God of love, will redeem them.

What this does is separate a person from the understanding that there is such a thing as Hell, there are consequences to sin. There is such sin in this presumption that "it doesn't matter how I live my life, God will take care of me, anyway." (per Msr. Lane)

This teaching brought up clearly why I often felt uncomfortable in those non-denominational churches. So often, the preaching was about feeling good, about "reaching higher" for spiritual knowledge - but yet the very knowledge that I needed to never forget was that I am a sinner. I am a sinner in need of saving, not just once, but on a daily (hourly) basis. Who else reminds us of such precious and Biblical knowledge but Catholicism? And who provides the remedy like Catholicism?

I have heard the "hellfire and brimstone" sermons but I admit, not as often as we need to hear them. Centuries ago, Jonathan Edwards preached what became a landmark sermon, "Sinners In the Hands of an Angry God." The teaching went on to become a legend within Baptist churches. During that sermon, men and women in the congregation were hanging onto the pews for dear life, terrified that the earth would open up and swallow them into Hell. There was great repentance that day and gave a name to the "hellfire and brimstone" types of sermons that eventually were rejected by those who wanted to focus primarily on God's love.

How often do we need to be reminded that we are in a fallen state of grace? I would say very, very often. St. Paul, to his letter to the Romans warned:

"Or do you presume upon the riches of his kindness and forbearance and patience? Do you not know that God's kindness is meant to lead you to repentance? But by your hard and impenitent heart you are storing up wrath for yourself on the day of wrath when God's righteous judgment will be revealed. For he will render to every man according to his works: to those who by patience in well-doing seek for glory and honor and immortality, he will give eternal life; but for those who are factious and do not obey the truth, but obey wickedness, there will be wrath and fury." (Rom. 2:4-8, RSV)

The Catholic church defends against relativism by emphasizing that God's love and mercy is not to be taken for granted. We can't just "slide" into Heaven, with a sloppy soul that cares little for effort and accountability. This is serious stuff. The most serious stuff that a man or woman will ever contemplate. The eternal state of our soul is at stake. As tempting as it is to fall into the "feel good" movements, it is dangerous to our soul. It lulls us into thinking that God will always accept our half-attempts toward doing the right thing while assuming that just because He loves us, He'll overlook our selfish stupidity.

There is a difference between true repentance and the manipulative half-hearted attempts to apologize; often seen in a teenager. I even engaged in those attempts myself when I was younger. Knowing my parents would forgive me, I would put on the show of being sorry but yet inside I was impatient to move on to what I really wanted to do, whatever it was. I often didn't give thought to my sin, and in doing so, I robbed myself of the gift of repentance.

There is more about this topic that I would like to explore but at the moment, it's time for me to start my day. During this season of Lent, it would be an excellent time for me to really consider all the ways I presume upon God's mercy. Praise be to Him that He allows us this consideration and hopefully, the conviction we need to bring us back to Him, availing us of His intent to transform us all into the likeness of His Son, Jesus Christ.
by Mary Rose at 5:28 AM

Mary Rose, I loved this post. This an important topic. I can speak from experience. Relativism along with the shame of some very serious sins is what led me to the "it's all about me" religion of New Age. It got me off the hook for a multitude of sins, but it certainly didn't bring me God's grace and mercy. I only found that when I returned to the absolute Truth of my Catholic faith.Thanks and God Bless!