Victory for the Killala Diocese: A Traditional Latin Mass May Come Soon 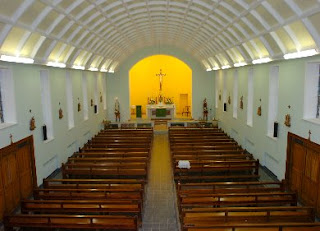 I have been interested in the dioceses who have obstructed or hampered the desire of some Catholics for having access to the traditional Latin Mass. Recently, the Vatican stepped in and informed the Killala Diocese (County Mayo, Ireland) that they are to provide the Catholics in their area a Mass in the Extraordinary Form. (mantilla nod: Clerical Whispers)

The Catholics in this area were placed in the unfortunate position of having to lodge their complaints to none other than the Vatican when it was evident their Bishop was turning a deaf ear to their requests. This to me is shameful. Why do Catholics have to go to such lengths to be provided access to a traditional Mass that has now been given the blessing from the Pope? Do not priests and bishops respect the Pope? Wait. Maybe I don't want to hear the answer. From the post at Clerical Whispers:

In July 2007, Pope Benedict's letter, Summorum Pontificum, eased restrictions on the pre-Vatican II Mass, the so-called Tridentine Rite and established that any Catholic priest can celebrate the traditional Latin Mass without first seeking the permission of his bishop.

Prior to the coming into force of Summorum Pontificum bishops had the right to restrict access to the Latin Mass.

Initially, the Killala Council of Priests, an advisory body made up of both elected members and priests appointed by Bishop Fleming, advised that no provision should be made for the Latin Mass pending a request for clarification from the Vatican on aspects of the Pope's letter.

This advice was accepted by Bishop Fleming and an announcement made that the Mass would be unavailable in the Killala diocese.

However, The Irish Catholic has learned that the matter came to the attention of the Holy See as a number of people in Killala wrote to the Vatican to express their frustration at the lack of provision.

Full Story (Thank you for the link, Tom!)

This is one of the reasons why I love the Catholic church. There is a very specific line of authority. Catholic parishioners do have a voice but it must always be heard through the dual headphones of the Bible and Tradition. The Pope, (who needs our prayers always) must discern God's will, glorifying Him. Not "mob rule" or the preferences of bishops. The Head of the Church, who is Christ, must oversee and direct. In the case of Pope Benedict XVI, His Holiness decreed a lifting of the restrictions regarding celebrating Mass in the Extraordinary Form. Sadly, some bishops and archbishops are resisting. They too, need our prayers.

The Mass of the Extraordinary Form will be held in a beautiful church, Our Lady of the Assumption in Ardagh, Crossmolina, Co.Mayo. The church has impressive roots, dating back to the 12th century.

It is good to know those of us who love the TLM have a friend in the Holy See.
by Mary Rose at 4:44 PM