God Bless Una Voce: Yes, There IS a TLM in Cincinnati!

I wanted to post this just in case there were folks in the area who wondered if there was a Traditional Latin Mass in Cincinnati. I was afraid there wasn't, but thanks to this Una Voce site (found through our own local chapter in Columbus), I saw there was one at the Sacred Heart Parish in Camp Washington.

When I travel to Cincinnati to visit my family, I like to attend Mass with my father, if possible. At first, we visited Old St. Mary's in downtown Cincinnati, which is a historical landmark. It is a gorgeous church, with fresco paintings and a beautiful altar. However, the Mass is a Novus Ordo ("New Mass") said in Latin, which isn't the same thing as a Traditional Latin Mass. 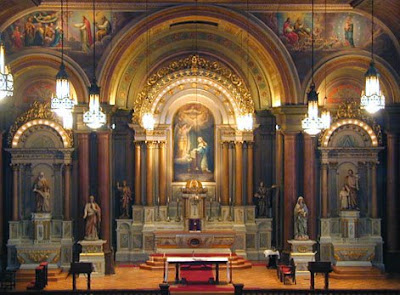 Sacred Heart is another beautiful old church. I was grateful when we entered to be greeted by the sound of the parishioners reciting the Rosary and most of the women wearing mantillas. The choir was just beautiful, filled with mostly female voices but sounding very angelic. Their style of chants was different than what I was used to hearing but yet very light and sweet. I especially liked how they sang the Sanctus and the Agnus Dei. I could tell my father was very touched, too. I know he prefers to receive communion on the tongue and Sacred Heart of course had the communion rail.

It was a good group in attendance. I'd say there were around 200 people there. I also found it interesting that the highest attendance at Old St. Mary's is for the Latin Mass. Interesting, no?

So if you're looking for a Traditional Latin Mass in Cincinnati, Sacred Heart on Sunday mornings at 11:30 AM is the place to go. My only regret was that there was no incensing of the offering. Sigh. But still, overall it was a much more preferred experience for me than a N.O. in Latin. But I'll take Latin any way I can get it. I really think it is the train that delivers reverence.
by Mary Rose at 11:43 AM

Hi! First of all, I just wanted to share that I love your blog! Second, I live in Dayton, and saw your blog about Latin Masses.... there is a Church in Northeast Dayton that has a Traditional Latin Mass every day. The church is "Our Lady of the Rosary" and the mass times are:

I am a new Catholic... I went through RCIA at the University of Dayton last year! I have spent alot of time on the internet reading about various Churches in Dayton and Cincinnati... and Old Saint Mary's in on my list of Churches to visit!!!!

You know what?? I have never even attended a NO Mass done in Latin. Now how sad is that?

I prefer the TLM but around here it is at a FSSP parish that is populated with SSPX folks who brought their "bad baggage" with them. I know this because I used to be one of them...

I'm thinking we may move to Toledo.

Toledo is awesome! In my "Pre-Catholic" days, we attended a wedding at the Cathedral in Toledo... and I found it to be one of the most gorgeous churches I've ever been to. And, Toledo also has Tony Paco's! Mmmmmmmmmmmmm