What I Love About Catholicism: The Holy Eucharist 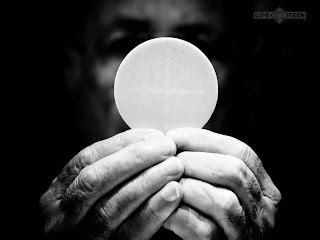 For those who have kept track of my entries (and of course, my father!), you know that it has been a particularly interesting journey toward understanding and receiving the truth of the Holy Eucharist. The Catechism of the Catholic Church states:

1324 The Eucharist is "the source and summit of the Christian life."134 "The other sacraments, and indeed all ecclesiastical ministries and works of the apostolate, are bound up with the Eucharist and are oriented toward it. For in the blessed Eucharist is contained the whole spiritual good of the Church, namely Christ himself, our Pasch."135

1325 "The Eucharist is the efficacious sign and sublime cause of that communion in the divine life and that unity of the People of God by which the Church is kept in being. It is the culmination both of God's action sanctifying the world in Christ and of the worship men offer to Christ and through him to the Father in the Holy Spirit."136

1326 Finally, by the Eucharistic celebration we already unite ourselves with the heavenly liturgy and anticipate eternal life, when God will be all in all.137

(The Catechism of the Catholic Church)

1374 The mode of Christ's presence under the Eucharistic species is unique. It raises the Eucharist above all the sacraments as "the perfection of the spiritual life and the end to which all the sacraments tend."199 In the most blessed sacrament of the Eucharist "the body and blood, together with the soul and divinity, of our Lord Jesus Christ and, therefore, the whole Christ is truly, really, and substantially contained."200 "This presence is called 'real' - by which is not intended to exclude the other types of presence as if they could not be 'real' too, but because it is presence in the fullest sense: that is to say, it is a substantial presence by which Christ, God and man, makes himself wholly and entirely present."201

1375 It is by the conversion of the bread and wine into Christ's body and blood that Christ becomes present in this sacrament. The Church Fathers strongly affirmed the faith of the Church in the efficacy of the Word of Christ and of the action of the Holy Spirit to bring about this conversion. Thus St. John Chrysostom declares:

It is not man that causes the things offered to become the Body and Blood of Christ, but he who was crucified for us, Christ himself. The priest, in the role of Christ, pronounces these words, but their power and grace are God's. This is my body, he says. This word transforms the things offered.202

And St. Ambrose says about this conversion:

Be convinced that this is not what nature has formed, but what the blessing has consecrated. The power of the blessing prevails over that of nature, because by the blessing nature itself is changed. . . . Could not Christ's word, which can make from nothing what did not exist, change existing things into what they were not before? It is no less a feat to give things their original nature than to change their nature.203

I don't think it was by accident that I came across the videos by FSMDude. I don't think it's by accident that suddenly, there is a rash of ignorant individuals who are desecrating the Holy Eucharist. These acts, which are meant to mock and ridicule the Catholic faith - are only serving as fuel to further my journey toward the Roman Catholic Church. I have a feeling I'm not the only one.

By the attempts of such people as FSMDude and Professor Meyers, not only Catholics but Christians everywhere are being given the opportunity to think upon the Holy Eucharist and their beliefs about it. We are faced with our own convictions and have been given an evangelistic opportunity to educate others about the Real Presence and why we believe it is true.

The Holy Eucharist is something I have always struggled with as far as accepting it as the Real Presence of Jesus Christ. I am now seeing that the reason for this is because I kept looking at it from the surface. I kept looking at the elements - the bread, the wine, the water - instead of of the command and promise of Jesus Christ. "Do this in memory of Me" and the promise that His sacrifice was to deliver us from the bondage of sin.

Here's what just occurred to me: Jesus said "... For where two or three are gathered in my name, there am I in the midst of them."" (Matt. 18:20) If Jesus Christ promised His presence through a gathering of two or three people who believed in Him, why not the Eucharist? He is present and real, beckoning to all who can receive Him to come and follow Him.

My longing for Him in the Eucharist has been increasing and I know this is a grace gift. As my father said, not everyone has been given the grace to believe. I am more deeply thankful than words could express that God has poured out His grace upon me. Meanwhile, I continue to hold in prayer such people as Dom and Professor Meyers that they too, would be given this same grace.
by Mary Rose at 9:18 AM

"By the attempts of such people as FSMDude and Professor Meyers, not only Catholics but Christians everywhere are being given the opportunity to think upon the Holy Eucharist and their beliefs about it."

Best thing anyone anywhere that I have read has said about this entire thing. Peace be with you and may God continue to call his children home via this very evil action.

I have always believed in the Real Presence but it wasn't until I read Scott Hahn's "A Father Who Keeps His Promises" that all the pieces began to fall into place. Then I was like "WHY DIDN'T ANYONE TELL ME THIS BEFORE????!!!!" I truly think that if I had known then what I know now I might not have made such a mess of my life. Thank goodness He called me back. And a lot of that had to do with NOT being able to receive Communion. God sure has a sense of humor!