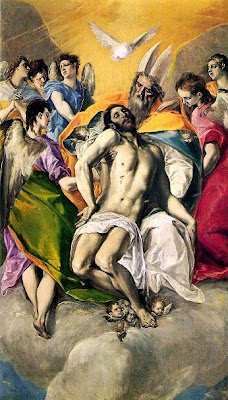 Wow. Don't those names just make you feel warm and snuggly inside? Doesn't your spirit yearn to be filled with the Sanctifier? Egads. Just that last sentence made me feel like an automobile that needed to be filled with another quart of Pennzoil.

This is old news but I just learned about it. The Vatican has determined that any baptisms prayed in the name of the "Creator, Redeemer, and Sanctifier" (or "Creator, Liberator, and Sustainer") are invalid.

When I read these specific terms used for the Father, Son, and Holy Spirit; I suspected it was to remove any sense of gender from God, His Son, and His Holy Spirit. Make way for the "Gender-Neutral" crowd who is intent on making us all automatons, ready to obey their totalitarian ways. Some believe this type of nonsense is going from "non-inclusive" language to "inclusive." Who do you think is so annoyed by gender-specific names? I don't think it's men. Women have such power to influence but militant feminists keep getting it wrong. They often focus on picking apart an acorn instead of looking forward to a full forest of strong oak trees. Sometimes I think they forget that through the Blessed Virgin Mary, woman was used to bring into the world the most incredible, amazing, no-words-for, revolutionary event that mankind has ever witnessed.

I was thrilled to read what the Vatican said. Even before I read their reasoning, I came to the very same conclusion: removing personal pronouns removes the inherent relationship that our Heavenly Father has with His Son and His Holy Spirit. It dilutes the power of the Holy Trinity. It destroys the eternal interdependent conversation that has, is, and will occur between all three. It is a mystery and not one I totally understand, but I do know there are three distinct aspects of God and relegating Him to gender-free nouns removes the power and mystery of the Holy Trinity.

Quite simply, we were created for relationship. What is so beautiful to me is how we are a reflection of God and His relationship with mankind. God first created Adam, the man. It is the man's DNA that determines the sex of a baby, not the woman's. So right there, God makes it clear that man is the initiator of life, as God is the initiator of creating man.

The son is raised by the father and mother to honor them and grow in maturity, eventually bearing children of his own, thereby imitating what the parents have done. It's a beautiful picture of a healthy family, which leads to healthy communities and a healthy society. It all starts with the family.

Oftentimes, families are identified by their "spirit." I have one from my father's side, although it probably isn't a good one. When I define myself by my father's surname, I'm saying that I'm feisty, stubborn, and quick to leap to the defense of someone. This is a trait that runs in my father's family. It is, to a degree, a "spirit." I was raised by my father and saw this spirit in him, which existed in his own family. With my Italian mother, I received a spirit of compassion and talkativeness. (Yes, talkativeness!) Almost everyone in my mother's family had this spirit.

So the Holy Spirit is a gift that has been given to us, but carries within Him the unique fingerprints of our Heavenly Father and His Son. Through the Holy Spirit, we are able to love as They would have us love.

So to me, it's all in the genes and in my humble opinion, the three words "Creator, Redeemer, and Sanctifier" only tell of a portion of the the roles God has in our life - but leaves out the most important. Relationship.
by Mary Rose at 11:04 AM

Good point that the names carry meanings about our relationship with the three divine persons.

I just heard an awesome talk by a mother superior who mentioned as an aside that Father, Son and Holy Spirit is who they *are*, who they've been from all eternity. "Creator, Redeemer, Sanctifier" is what they did for us in time; those are the roles they took on. Makes much more sense to speak of who they are.

Anyway, I want the religion that comes from God, not from man. (For feminists who have such difficulty with this concept: I use "man" in the universal sense of "human beings.")