What I Love About Catholicism: First Communion 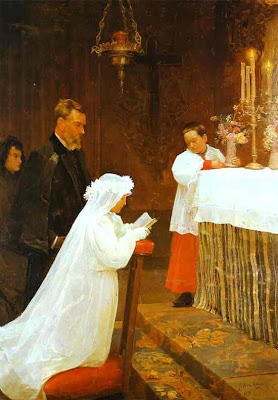 It's First Communion season and today, two boys and two girls received for the first time the Sacrament of Holy Communion. I smiled as I watched them walk slowly toward the altar during the processional, tender and serious, trying not to make any mistakes.

It brought back memories of my own First Communion. For little girls, it's especially beautiful as they don their white dresses, white anklet socks with patent leather shoes, and if that wasn't bliss enough - a white veil and white gloves! We were told that our dress was symbolic of being "brides" of Christ, and there would be some who would ultimately become this by becoming a nun. I just remember it being a Very Special Occasion and that meant lots of relatives invited to our home and lots of good food. The gifts to me were a nice surprise but what I remember the most was understanding that taking First Communion was a big deal in church. Very big.

What I love about Catholicism is that it takes such things seriously. In a non-denominational church, there is no pomp and circumstance surrounding communion. I know that other churches do not believe in transubstantiation, where the bread and wine are transformed into the Body and Blood of our Lord Jesus Christ. They believe that it is symbolic. Even some Catholics believe it is more symbolic than anything.

But for Catholic boys and girls, they are being introduced to a mystery. They know it is a mystery precisely because of the pomp and circumstance. There was an unmistakable sense of awe as these little ones knelt at the communion rail to receive for the first time the Body of Christ. I was so happy to see that their first experience included receiving communion on the tongue with the golden paten held beneath their chins.

What was also touching was Fr. L's homily. He addressed the children and told them how important it was to receive Jesus Christ in this way. I was touched as he told them to even utter the holy name of Jesus meant he needed to take off his biretta. As he removed it, he told them that at the end of days, every knee will bow and every tongue proclaim Jesus Christ is Lord. I could just hear their little minds turning with that thought!

It is markers such as this that builds our faith. They are reminders that our faith is to be taken seriously. Holiness demands a different approach. Today, those children got the message as their proud families looked on.
by Mary Rose at 2:04 PM

My nephew's reaction to his FHC? All he could say is "that tasted like a popsicle stick." *sigh*

Ha! These little ones really don't have a clue but still, they're being taught, which is to me what's important. Later, they also will have the memories and perhaps ponder more the mysteries of our faith.

Popsicle stick...that is just too funny! I also think that most little boys aren't as fascinated with it as the little girls. :-)