What I Love About Catholicism: The Sacrament of Reconciliation 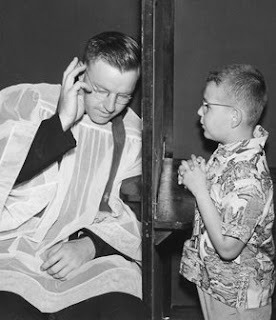 For those of us old enough, we remember when it was called the Sacrament of Penance, or "going to Confession." I was raised with the thinking that if you didn't go to confession, you shouldn't be receiving communion. One priest I recently spoke with (who is part of an average parish with a very modern church sanctuary) said that a Catholic can go once every three months. He said that for many people, going every week became rote and almost meaningless.

I don't know about that, but I do believe confession is not only good for the soul, but necessary for the conscience. Last night, I had a challenging conversation with my brother, who also left the Catholic church and is now attending a Church of Christ with his wife and family. I feel partly responsible for this because he is my younger brother and it was I who first left the Catholic church many years ago. I know for quite some time, my parents would console themselves by saying, "well, at least he's still attending Mass..."

My brother has a huge issue with this sacrament. He thinks it's highly arrogant for priests to think they have the power to forgive anyone's sins. Instead of getting into a theological debate with him for which I was ill-equipped; I focused on another aspect.

I reminded him of the Biblical verse that speaks of us confessing our faults to one another(James 5:16). He agreed this is important. Then I said, "You know, as many churches and Christian groups I've been a part of, none have systematically followed this directive like the Roman Catholic church." I shared with him how often it would instead look like this:

Person A confesses a fault to Person B, or as usually was the case, to their Bible study group. Person B or someone in the Bible study group would then share this information under the guise of "a prayer concern" to others and before you knew it, a gossip chain was formed. I've seen people wounded by this over and over again. It's so bad that very rarely will a Christian church leader confess any struggles he or she has with anyone because they're afraid it will become gossip that will hurt them and damage the church.

I believe that Jerry Falwell experienced a part of this. Leadership is a very heavy burden. There is much pressure to "be perfect" and when one feels as though they're starting to crumble, to whom can they turn? It's well and good to turn to God, but we were created for relationship, and that to me is where confessing our faults to one another comes in.

Now a priest provides a true gift in living out James 5:16. When we confess to a priest, it stays with the priest. He doesn't share it with his housekeeper, his secretary, his servers, his deacons - anyone. He keeps the confidentiality. This is such a blessing.

I know the power of confession. There were times that I held something deep inside and was afraid to release it in the open. But you know what happens when we hold on to such things? The enemy of our souls has free rein over our emotions and will play mind games with us. The enemy will shower shame, guilt, and condemnation upon us. When we confess, we are basically giving him no quarter. The enemy no longer has a foothold in our souls as we confess our sins and repent wholeheartedly to the Lord.

I'm going to be studying this sacrament more fully, but as far as I can see, the priest is both a witness to this and able to provide comfort and grace to us through the power of the Holy Spirit. I think after I was finished, I gave my brother something to think about. The power of confession is monumental and one I think is often overlooked by not just some Catholics, but many, many Christians of other churches.

Thank God for confession!
by Mary Rose at 10:53 AM

Great post! You certainly gave your brother something to chew on! And for what it's worth - I think you are VERY equipped to engage in theological debate.

The thing I love about Catholic theology and the Sacraments is that not only are they rooted in God but in common sense. Your post proved that with the example you gave about a confession turning into fodder for gossip.Of course it makes more sense to confess to a priest who is bound by the Seal!

In the 2000 year history of the Church I have never heard of a priest breaking that seal, not even bad priests. And trust me, the Church being the target that she if even one priest ever did it that would be front page news forever and ever.

My kids were questioning me the other day after we went to Confession (I still call it that, Sacrament of Reconciliation is just too long to say LOL) about the priest keeping everything secret. My oldest say "what if you ask him what I confessed, will he tell you?". He seemed happy that I said no, not even to me would the priest tell.

What was providential, just two days later at Mass, the text was "Whatever you bind on Earth will be bound and whatever you loose on Earth will be loosed". We had a nice discussion afterwards, how the priest is standing in for Jesus and it's not just a priest you're confessing too.

It took me MANY years to appreciate Confession, but now that I do, I try to take advantage of it every 6 weeks or so. But when I originally returned to the Church, I would go once a week because I'd remember something I had forgotten, or whatever. Being away for 20+ years, there's a lot of forgotten sins! LOL

Angela, thank you! I didn't mention this, but my bro is a lawyer. Which pretty much makes him believe that he can win any argument, every time! But I'm praying for him and asking that God would give him the grace to forgive the church. Even priests need confession! I don't think my brother fully understands the Biblical verses that support the Sacrament of Holy Orders. At least I gave him something to think about.

Paula, what a cool story! Since I bought a 1962 Roman Missal, I've been humbled by some of the prayers, especially the Evaluation of Conscience to help a person prepare for confession. In fact, there's a good chance I'll type it and include it in an entry. It's really amazing and to me, very helpful.

I am an Eastern Orthodox Christian, and I must add, that I, too LOVE the sacrament of reconciliation. Good post.