What I Love About Catholicism: Our Worldwide Family 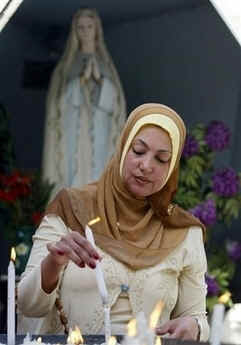 I recently read an article which reported that for the first time in thirteen years, Catholicism was being openly practiced in Arabia. I found my reaction to this substantial. I felt happy and connected to my fellow believers. I also wondered if my reaction was similar to American Jews understanding they are connected to a larger worldwide group.

When I was attending non-denominational churches, I knew there were Christians around the world who took their faith very seriously. Many were martyred for their faith. But I also discovered that there were differences in the various Christian churches. Some were founded by American Christian missionaries and as a result, bore a distinctive American mark on their worship. Others were more native in their approach and were helped by translators (such as the Wycliffe Bible Translators) who worked hard to bring the New Testament to their village.

But Catholicism is different by keeping the same standard - the Holy Sacrifice of the Mass.

I know there are slight differences throughout the world with how Masses are celebrated. In Africa, they dance because that's what Africans do. However, even though they may be doing a jubilant dance as they bring up the offering, they are still bringing the offering. I find it humbling and inspiring that when I attend Mass, I am joining hundreds of thousands all over the world who are doing the same thing. These are my brothers and sisters in Christ and through the sacraments, we are bound.

My desire is to someday attend Mass in many different countries. How awesome it would be to pray the Rosary with these Catholic believers. I have been noticing I've had visitors from Europe, Korea, and the Philippines. I was especially happy to see someone visit me from Albania! We are connected through the mysteries of our faith. I need to remember our Catholic brothers and sisters in other parts of the world more often in my prayers, especially those in the Middle Eastern countries.
by Mary Rose at 10:00 PM

yep. I come from Indonesia, and even though the mass is slightly different, we do and say the exact same word in our native language. I went to a Spanish mass once and... whoa... it was fascinating to see that even though I did not understand the meaning of the language, I knew exactly in which part of the mass I was at... Catholic, it's the universal faith. (which is what catholic means literally)

We went to Mass in Colombia. It was obviously in Spanish but followed the order we are used to at home.

We recently had a novena to the Holy Spirit that concluded on Pentecost. Every night the Rosary was led by 5 different people. One spoke English, another Spanish, another Portuguese, another French and another Polish. We also have in our parish many Phillipinos, Dutch, Germans, Danes, Hungarians,Japanese, Irish, English, Italian, and many more.

tune, thank you for visiting. Isn't it awesome that we can all worship together, even though we may not understand the language? We have a sort of "visual" language, where we see the particular and distinct aspects of the Mass and are able to worship Jesus Christ through His suffering, death, and resurrection.

Angela, that is fantastic that you have so many internationals in your church! Very cool! For some reason, I feel more of a unity in the faith within the Catholic church than I ever sensed when I attended non-denominational churches. Very interesting... :-)