One of the sites that truly has some of the best eye candy in the Catholic blogosphere is The Crescat. The owner, "Carolina Cannonball", obviously has a highly developed appreciation for good art and little patience for bad art. Such is the case in a recent entry, Contemporary art which is not art.

About a hundred years ago, I was an art major in college. Ever since I was a little girl, I had spent time drawing. In school, my talent was encouraged by both my teachers and my parents. When people asked me what I wanted to be when I "grew up," my answer was always the same - an artist.

I declared a Graphic Arts major when I first started college. However, after a year and a half, I ended up switching majors because I was intimidated into doing so from a bitter advisor who pretty much assumed it was his job to weed out those, who in his estimation, didn't have the cajones to hang with the big boys. In hindsight, I wished I had switched to Fine Arts, which was probably more suitable for my talent, but alas, I didn't.

Art has never been far from my life, though. My favorite medium is graphite pencil. Years after I left college, I found an art teacher and took a few lessons to get myself back into drawing. (I've never posted my art online but do so to establish to an extent my love and respect for art. I suspect I'm going to be talking more about it in the future.) When I first started, it was such a battle to still myself for two hours and sketch. My mind would be racing with various ideas and it was very hard to focus again on drawing. My art teacher would place various objects before me to sketch. Such as a clay bust of a young woman. I added a long neck to her, which is my own preference. I just love long necks but believe me, I have no idea if she had such a neck. Most likely not...

During this time, I rented a small studio space and tried to get back into the local art scene. I confess I never felt as though I connected with many other artists precisely because of my faith. Most artists I have met have either been atheists or adopted a mix of various belief systems that they formed into some type of faith but usually struck me as confused and hazy. Clarity is very important to me. I'd rather meet someone who would passionately declare their beliefs rather than someone who was wishy-washy about admitting to belief in anything or anyone.

(Below are some of my pieces. My favorite is the portrait of my nephew with the cute little cap on his head. This boy now towers over me at the age of sixteen.) 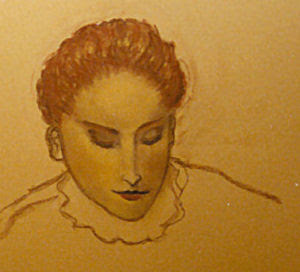 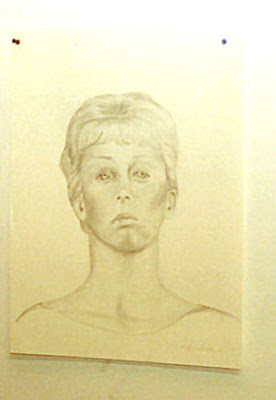 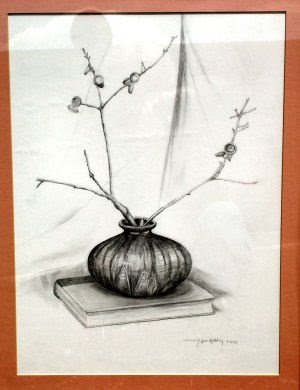 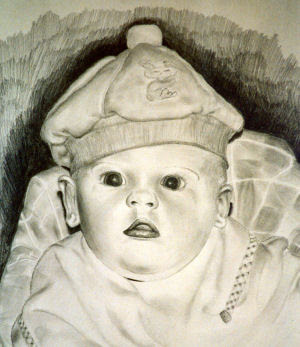 As I've looked at the various images on The Crescat, I've realized more than ever the enormous legacy that sacred art has bestowed. Centuries ago, the only kind of art that existed was sacred art. Most of those who had any drop of artistic talent would try their hand at a triptych or a painting that would reflect the divinity of Christ. And what gorgeous pieces they created.

Cologne School c.1510-20 Triptych of the Virgin and Child with Saints oil on panel: 126.5 x 350.5 x 6.0 cm
National Gallery of Australia purchased with the assistance of James O. Fairfax AO and the Nerissa Johnson bequest 2001

When I was younger, I remember noticing how art within many Catholic churches took a sharp turn into modernity. I think I had more patience for modern art when I was younger. Now not so much. I think most of it is self-indulgent slop. It's one thing to attempt a certain conceptual design that expresses the artist's vision. But it's another thing to masquerade a sloppy design as art, which has been a sticking point with me for over twenty years. I suppose one could say I'm a hardkore traditionalist when it comes to art.

I believe we do need art, but the kind that elevates our spirit. I've never been too keen on artists 'exposing' or 'revealing' the sins of the culture. I mean, really. Do we truly need to be reminded by an artist who most likely doesn't believe in God that we live in a fallen world?

So I'm speaking from a very specific perspective and one I know is not shared by everyone. Which is fine. We all have our preferences when it comes to art. I have been known to enjoy some pieces of modern art, especially glass sculpture and stained glass. Anything that captures or filters light is fabulous, in my opinion.

When I look at art, I want to first, understand the design. Secondly, I do hope to be inspired first and challenged second. If I can't walk away from an art piece wondering about it, there is no point. This is why I was so disappointed years ago when I saw how boring art had become the trend. A woman gnawing on a huge cube of lard, and then spitting it out in order to eventually create lipsticks to show the consumption of beauty in society was not the least bit intriguing to me. In fact, it was downright revolting. But that's the kind of slop that had the writers at Art in America sit up and take notice. Yeesh. Not surprisingly, I didn't renew my subscription after it ran out.

So. I can appreciate Carolina Cannonball poking fun at some of these modern art pieces that to me, have no soul.

And maybe I'll start noticing again sacred art created by today's devout artists who want to inspire. Not bore.
by Mary Rose at 11:23 AM

Email ThisBlogThis!Share to TwitterShare to FacebookShare to Pinterest
Labels: Art

Oh my - those pictures are wonderful. You must keep working. Your favorite of your nephew is just great!!!