The Reclamation of Holiness 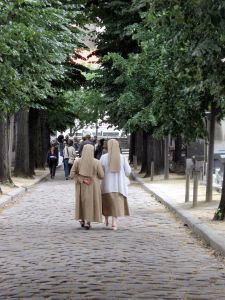 Since returning to the Catholic church, I've been noticing a new desire for holiness. Or perhaps a better way to put it would be a new recognition of holiness.

The Hebrew word for "holy" is qodesh, a noun. It means apartness, holiness, sacredness, separateness, set-apartness. I have been seeing this distinction grow within the Roman Catholic church, even within the past two months. Everywhere I look, I see a return to holiness or a desire to learn more.

There is Pope Benedict XVI who gave the Holy Eucharist to people who knelt before him and received communion on the tongue for the Feast of Corpus Christi. There was the recent broadcast of Card. Castrillon Hoyos ordaining priests for the FSSP in Lincoln, Nebraska during the Extraordinary Rite. (Fr. Z has some gorgeous photos) There is the recent book by Colleen Carroll called The New Faithful:Why Young Adults Are Embracing Christian Orthodoxy. Finally, I see it with my own eyes as I attend the Tridentine Mass and notice how many people are in attendance, including a good number of younger people.

Recently, I listened to an archived broadcast of the radio program "The Journey Home" with host and founder, Marcus Grodi. He was interviewing Rosalind Moss. I had never heard of her before but was immediately captured by her story. Born and raised in a Jewish home, Rosalind ended up joining the Evangelical church, and then finally became a Catholic in 1995. What touched me was something she said about nuns.

She said she remembered clearly the day she heard that nuns were allowed to shorten their habits from the ground to shoulder-length. She felt a pang of loss. Even though she was Jewish, she thought, "They are here to change the world for God and now the world has changed them."

Recently, Rosalind Moss announced that she received permission from the Archbishop of St. Louis, Raymond L. Burke, to start a new community of sisters with a focus on evangelism. And they will be wearing floor length habits.

I've been wearing a head covering now to Mass for a little over a month. I know that it has helped me in many ways. First, I do believe in the Biblical foundation for it established by 1 Corinthians 11. Secondly, I like how it distinguishes a demarcation between my secular life and worship. I know that for many years, I believed that my whole day should be a prayer to God. I certainly pray to Him throughout the day, but in coming together with a community of believers, I now realize I need touchstones to settle my spirit, to allow me to realize I am in a holy place that requires a different approach.

So much of our culture is casual. "Casual Fridays" for many workplaces have become normal attire throughout the rest of the week. Children more often will address adults by their first names. Lack of manners and etiquette is, sadly, too common. There's even been a decline in respecting those in authority such as law enforcement officials.

Recognizing that there is a time and a place for everything, I believe more people crave an obvious embrace of ritual that sets apart that which is special, uncommon, and important. We set aside time to celebrate special holidays. Annual traditions knit together families and provide beautiful memories that reconnect us with our loved ones. We look forward to such events and mark them by doing something different.

I feel this when I now attend church. Before, I attended churches in large, dull rooms that could be used for a variety of purposes. Need a spot to have the kids play indoor dodge ball? Or how about a graduation party? Just make sure the room is back in place for Sunday worship. Now I attend church in a building that is specifically used for worship. There is a specific way I enter into the building and a specific position I take. I sit in many places but in church, sitting is imbued with my focus on God. And I don't kneel in too many places but do so on Sunday morning.

Holiness is acknowledged by certain articles such as a nun's habit. What bothered me when nuns no longer wore their habits was that I couldn't tell who was a nun and who wasn't. I didn't know how to address them since there were no visual clues. This disappointed me and caused me a certain amount of distress. My parents raised me to respect my elders and address them by their proper titles, but how could I do so if I didn't know they were either a nun or a priest?

We need the outward symbols because they remind us there are places and times for holiness to be acknowledged. This is why I was thrilled when I heard Rosalind Moss explain why her sisters were going to be wearing a full habit. It's what thrills me when I see Mother Angelica and her sisters wearing the full habit. I can give them respect and rejoice in knowing that they have recognized our need for holiness.

Because it's tough to get to any destination without the signs.
by Mary Rose at 9:23 AM

Angela, you described most of the customer's at a feminist/lesbian bookstore I visited decades ago in my hometown. (Back when I was trying to marry Christianity with feminism...egads. Someday I'll post about that one!)

Your response made me laugh! No crucifix, indeed!

You noted that the word qodesh means
HOLY..
and
I am a Maronite Catholic, ..
We sing the qadishat at every Divine Liturgy.
I recomend you read about our Eastern Catholic Liturgy,
We are truly Catholic, and We are Holy.
Pray for the Catholics in Lebanon,
There is great difficulty there,
God bless you,
Ellen from Buffalo,NY

I like the points you make here, and the quotes of disappointment when the head covering was tampered with or removed altogether. Lovely thoughts in this blog. I am glad that you can see and write about the benefits and joys of things that are symbolic.