I am a digital scrapbooker, which means I create my scrapbook pages on the computer. I didn't start to scrapbook until I married in 2001. Suddenly, I had a man I adored and all I could do was take a bunch of photos of him! Plus, my darlin' man is a photographer, so he started to teach me the basics of photography. (This is one reason among many I am forever grateful to God for giving me this man.)

For a few years, I used the typical paper scrapping method until I heard about digital. My husband suggested I use a desktop publishing program he introduced to me when we first met. (Serif's PagePlus. By the way, Serif is having a 50% off sale on PagePlus. This is an incredible deal! For a limited time, you can buy it for $64.99.) This program is just fabulous on so many levels. I started to teach digital scrapbooking classes in 2006 and use this program for my students. It is a very easy, "drag 'n drop" program that is visually accessible and very intuitive. It's also, in my opinion, a heck of a lot easier for the beginner than say, Adobe Photoshop Elements.

Over the years, scrapbooking as a hobby has evolved into an art medium for many. I was more traditional with my approach when I first started. (Gee, traditional...such a surprise, eh?) But as I started to take photographs to capture what was important in my life, I realized some of my pages were turning into visual journals. (Usually my pages are filled with journaling.)

Just a few weeks ago, I created my first layout about my faith. I'll be doing more of these and they may become a magnificent obsession for awhile. So, here is the layout with the journaling below: 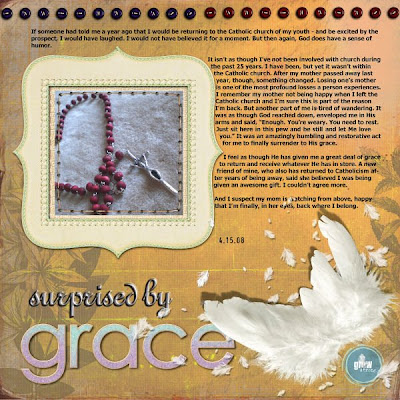 If someone had told me a year ago that I would be returning to the Catholic church of my youth - and be excited by the prospect, I would have laughed. I would not have believed it for a moment. But then again, God does have a sense of humor.

It isn’t as though I’ve not been involved with church during the past 25 years. I have been, but yet it wasn’t within the Catholic church. After my mother passed away last year, though, something changed. Losing one’s mother is one of the most profound losses a person experiences. I remember my mother not being happy when I left the Catholic church and I’m sure this is part of the reason I’m back. But another part of me is tired of wandering. It was as though God reached down, enveloped me in His arms and said, “Enough. You’re weary. You need to rest. Just sit here in this pew and be still and let Me love you.” It was an amazingly humbling and restorative act for me to finally surrender to His grace.

I feel as though He has given me a great deal of grace to return and receive whatever He has in store. A new friend of mine, who also has returned to Catholicism after years of being away, said she believed I was being given an awesome gift. I couldn't agree more.

And I suspect my mom is watching from above, happy that I’m finally, in her eyes, back where I belong.

If you're interested in learning more about digital scrapbooking, I posted my website on the sidebar, ScrapShot Magazine & Designs.
by Mary Rose at 7:42 AM

Email ThisBlogThis!Share to TwitterShare to FacebookShare to Pinterest
Labels: Scrapbooking