What I Love About Catholicism: Catholic Women 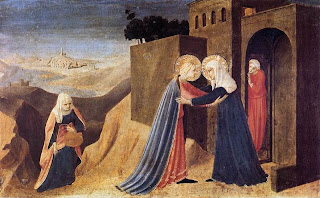 I didn't realize how much I missed Catholic women until I returned to the Catholic church.

How to put this into words... Bear with me because what I'm about to say may seem overly sentimental. Maybe it is. But time has a way of changing your perspective and now that I've been "around the block" a few times, I can see there is a distinct air about a Catholic woman that I've not seen within other Christian denominations.

Catholic women are real. They're full of grit and full of grace. "Grit" is one of my favorite words. I'll tell you what my definition is so you know what I mean when I say it.

Grit - noun: not caring about what others think of a position or idea; able to stand strong in the midst of life's trials and say, "God, give me the grace to bear what You have given to me." Identifying immorality or unethical behavior in society; understanding sin and its consequences and not being afraid to name it.

That's a start. Catholic women demonstrate a beautiful blend of common sense, sacrifice, wisdom, and strength. A good Catholic woman is not a whiner or a complainer. It isn't part of her vocabulary. She is persevering, especially when it comes to protecting her family and instilling in them Christian values. She makes sure her daughters are dressed modestly and her sons treat women with respect. She teaches both of them to pray for good marriages and not use the opposite sex as a plaything.

Catholic women understand sex. Do you know that from all the churches I attended, none talked about sex and how it is a gift from God? None talked about the sexual act as a beautiful mystery, reflected in Christ's relationship with the Church. I never heard sex being honestly discussed in the non-denominational church I attended.

I remember hearing quite a lot about sex during my Catholic schooling. I specifically remember a Catholic couple who shared with our youth group the joys of marriage. It made a deep impression on me.

Catholic women don't shy away from such topics but embrace them with enthusiasm that is reflective of their desire to understand God. Catholic women know there is a difference between self-serving pleasure and an honoring of the purpose of marriage. They are secure in knowing that as long as they pursue God in this area, they will be blessed.

There is something about the Catholic faith that purifies a woman. Catholicism talks about such things as sacrifice and suffering. This is the language of woman. They understand because it is in our nature to experience these two things. When a woman is called into marriage, she is required to sacrifice her own preferences in order to place her husband ahead of herself. That's submission. Catholicism instills submission automatically by its hierarchical structure. I realize there are dissenters but many times, dissension is the result of people who simply don't want to obey anything or anyone other than themselves.

I think Catholic women instinctively know that submission is required of them. A good Catholic woman not only accepts this, but rejoices in it. It is this joy that shines forth from them, and those who meet them realize something is different. It is because they're seeing the rare occurrence of a woman who is not fighting against God. That is powerful. There are lots of women fighting against God right now but many Catholic women stand apart.

There is a certain kind of undisciplined emotion that runs through some non-denominational churches. I think it's because there is no foundational teaching about suffering. When a woman runs up against a hard situation without any spiritual formation that explains hard situations are the norm for a Christian, she says things such as "The devil is really attacking me today!" Or "I must have a lack of faith because things aren't going well for me."

Jesus said that if the world hated Him, it would hate us:

So the trials we go through are really nothing compared to what Jesus Christ went through. Catholic women know this like the back of their hand. Catholic women know that suffering is a part of life. I also think that revering Mary, Mother of our church, is a large factor. When you look at the life of Mary, you see how much suffering she experienced, the doubt and anxiety that plagued her. But through it all, she trusted God.

There is such strength in Catholic women, and to me - it's because they understand that they are weak. As our Blessed Virgin Mary said to the angel, "Let it be done to me according to your word." And good Catholic women everywhere echo her words.
by Mary Rose at 10:03 AM

Email ThisBlogThis!Share to TwitterShare to FacebookShare to Pinterest
Labels: Thoughts on Women, What I Love About Catholicism