What I Love About Catholicism: Fatherly Love 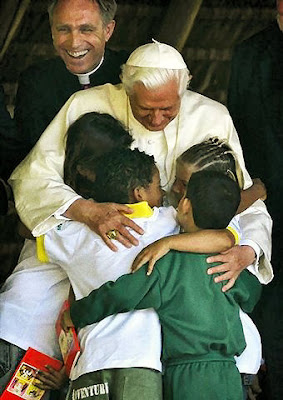 I may elaborate on this topic more, but today my mind was filled with thoughts of fathering and in particular, the fathering that goes on within the Catholic faith.

Part of what contributed to my musings was Fr. Z's entry on Cardinal Castrillon Hoyos declaration that the Latin Mass is to be reintroduced to every Roman Catholic parish in England and Wales. This is amazing in itself. The Latin Mass, from the featured article, was effectively banned from both countries for 40 years. The liberals do not want the Latin Mass to experience anything short of a final death, so suffice it to say they're not too happy with this development.

As I pondered this information, (and the lively discussion going on in the combox) I realized what we are experiencing is a father's love through our Holy Father, Pope Benedict XVI.

Many times, fathers make unpopular decisions in the family. They are often the ones who have to not only set the rules, but enforce them. Fathers direct, guide, and discipline. Mothers do this also but I would humbly submit there is a different way she goes about it. How many mothers have said, "Just wait until your father gets home..." Which of course made most children eager to redeem themselves.

There has been a great deal of doctrinal error, rebellion, and abuse (both liturgically and on a personal level) within the Catholic church over the past 40 years. For 25 of those years, I was absent. But I remember the blandness of my local parishes and realize it was no wonder I left. There was no "defense of the faith" then or a passion for the Catholic faith. My spiritual formation was weak and although I had a hunger to learn, I admit I did not turn that hunger toward the Catholic church. I thought at the time that there were better churches than the Catholic church.

Pope Benedict XVI is doing something very brave and to me, very right. He's bringing the Latin Mass back into the spotlight for a reason. Because on a certain scale, the Catholic church has lost its way. Over the past few decades, the world has had its way with the church. Every social issue has been brought up but yet topics such as sin and holy living have been kicked to the curb. I read today a fascinating testimony of a young woman who almost abandoned her Catholic faith for an evangelical church but was rescued by the wise words of her mother. (Her story has been preserved on the blog, "A Quiet Catholic." The story is "I Was Robbed.")

The Tridentine Mass (also called the Extraordinary Form or Latin Mass) leaves no room for that. As a matter of fact, just reading the 1962 Missal's portion of what to contemplate before going to confession (A very clear "Examination of Conscience") proves that whoever put it together was taking sin very seriously.

How seriously do we take sin today?

A good father won't allow his children to run roughshod over him or his wife. He will not allow his children to act selfishly or throw noisy tantrums when they don't get their way. A good father will confront his children and challenge them to consider their ways. My own father did this and I am so thankful I had such a dad. Did I like to be disciplined as it was happening? No, of course not. But I realized my father only did it because he loved me enough to withstand my momentary resentment so I could be set on the right path.

I'm loving Pope Benedict XVI more and more. I believe he is a true Father in relation to bringing the Latin Mass to the forefront. It is for a "teachable moment" that we, as the Catholic church, so desperately need.
by Mary Rose at 10:54 PM

Email ThisBlogThis!Share to TwitterShare to FacebookShare to Pinterest
Labels: Gregorian Rite, Latin Mass, What I Love About Catholicism