Blessed Imelda Lambertini and the Eucharist 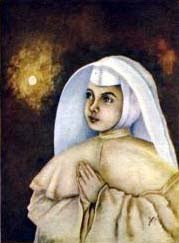 As a little girl, Imelda Lambertini longed to receive the Eucharist. She entered into a Dominican convent at the age of nine. She was so in love with Jesus that she would pray continually for the day when she would be allowed to receive the communion. During that time (1322), the earliest age to receive first communion was 12. She would sometimes exclaim: "Tell me, can anyone receive Jesus into his heart and not die? " To her, to receive communion would fill her with unspeakable joy.

When she was eleven, she attended Mass as usual with the sisters. Afterward, she stayed to pray fervently to receive Jesus in the Eucharist. Suddenly, what appeared to be a Sacred Host floated above her as she knelt in prayer. A nun who witnessed this hurried to the priest. The priest had no choice but to take the paten and receive it, then giving it Imelda for her first communion.

After such a miraculous event, the priest and the nuns left Imelda to spend some time in prayer. When they came to retrieve her, she was still in prayer, but did not move when they called her name. Finally, she collapsed on the ground and they found she had died from ecstasy! The year was 1333 and she was eleven years old. So indeed, her words were prophetic as she wondered how anyone could receive Jesus and not die from joy. 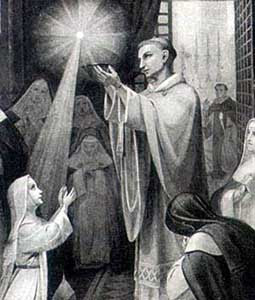 Blessed Imelda was beatified in 1826 and is considered the Patroness of fervent first communion.

I heard this story today on my Catholic radio station. I don't think it was by accident. I know this is the season for First Communion. But I also am in the midst of an annulment process, because my husband was previously married and when I married him, we married outside the church. At the time, I had no thought that I'd ever return to the Catholic church. Then when I returned, I erroneously believed that since I had never been married, there would be no problems. (Wrong!)

I discovered that Rome recognizes all marriages. I needed to first have my husband's first marriage annulled before we could be blessed by the priest. Only after all this happens, will I be able to receive communion again.

When I was young, I understood communion but my heart never fully absorbed the truth of it. I don't think I gave much thought to walking up and receiving communion in my hand. It was casual. I didn't look at it as a vital part of my life.

When I discovered that I was most likely going to have to wait months before receiving it, I knew it was a sign. I believe that God has given me this to bear so that I may absorb the truth of Jesus Christ's presence in the Holy Eucharist. I know that when the day comes for me to receive communion again, it will mean something. I may have over a year to study this topic and am very grateful to God for the opportunity to do so.

I've been longing for meaning once again in my spiritual life. This may be the very heart of it all for me.
by Mary Rose at 2:15 PM

This time of waiting is precious! Don't lose heart. It is medicinal, not punitive. Eucharistic Adoration will help as will praying an Act of Spiritual Communion.

(I am still pretty much fasting from the internet...a certain person on COL posted something today that actually made me say the "f" word...so obviously I need to stay far, far away from there.)