Is There a Patron Saint for Understanding?

One of the reasons I was drawn toward returning to my Catholic faith as opposed to just finding another Christian church was because I yearned for unity and stability. Some of the churches I've attended in the past have been rife with disunity and seemingly inevitable church splits. I've often wanted to echo Rodney King's lament, "Can we all get along?"

So, fast forward to my re-entry into Catholicism. As I started to reacquaint myself with ancient prayers and rites, I soon discovered divisions within the church. Some don't like to refer to it as a conservative vs. liberal approach, but at this time, I don't have a large vocabulary to distinguish the two. Some understand the word "Orthodoxy" to mean Eastern Orthodoxy, which I know isn't the same thing. Orthodox to me seems to mean a strict adherence to the Magisterium, the motu proprio regarding the celebration of the Extraordinary Form of Mass, and others that I don't know about. 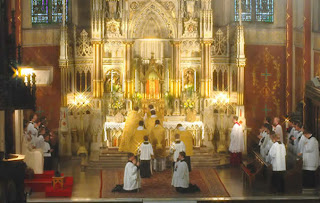 I'm almost at the end of Colleen Carroll's The New Faithful:Why Young Adults are Embracing Christian Orthodoxy. She said something I found profound and not a little convicting:

The most committed members of a denomination frequently are the least likely to work with outsiders and understand views that contradict their own. Strains of that insularity are plainly apparent in this crop of orthodox believers, especially among conservative Catholics, evangelicals who inherited heavy doses of anti-Catholicism, and members of some Orthodox churches.

That insularity also will damage the credibility of their movement, relegate it to the fringes of society, and perhaps even repel their own children, who are apt to rebel against the subculture as did some of these believers and many of their parents.
(p. 266)

This really gave me some food for thought. As much as I am ecstatic to find like-minded believers on the internet and starting to meet a few in real life - I realize I am going to be faced with this tension the rest of my life: how to balance my own growing love with orthodoxy while still treating my more liberal brothers and sisters with love and respect.

I know, for instance, that the priest of the parish who celebrates the Latin Mass, has been known to poke fun at the more liberal parishes. The liberal parishes, in turn, criticize XYZ parish for being behind the times.

I agree with Carroll's assessment. I think we need to be careful of our hearts because just as liberals show their prejudice toward conservatives by sneering at their beliefs, so conservatives should be careful not to fall into the same hole.

Now, after saying all that, I will say this: truth is truth. The Roman Catholic church has stood for centuries, amid many upheavals, because (in my humble opinion), they've sought truth. Rome has admitted its mistakes and I'm sure more will happen in the future. Still, there is a hierarchy of procedure and structure for a reason, and most of those reasons come straight from the Bible.

I'm half-jesting regarding the patron saint question. I know that my responsibility as a Christian is to love and forgive others. Personally, I think most of the exhortations of the New Testament are meant to bring the brethren together to dwell in unity.

Because if anything tests our faith - it's getting along with one another in church. 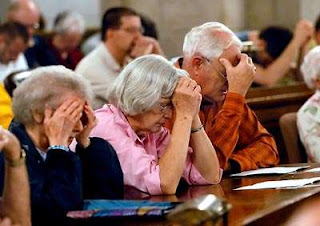 Very good points. I have noticed this insularity myself.

I can't wait to get this book - thank you for recommending and reviewing it!

When I came back to the Church I was like you - I fell IN LOVE with orthodoxy. Now five years down the road I see that while it's good to have a firm foundation our real job is not to look inward but outward - to reach those who don't understand and embrace and love orthodoxy. And to do it with LOVE.

To just throw the "book of rules" at them will get us nowhere. We must propose the person of Jesus more and more. When one comes into relationship with Jesus and literally falls in love with HIM, then one can easily be obedient not just to Jesus but to the Magisterium as well.

We MUST meet people where THEY are and work from there. When I was a bra-burning heretic I would have laughed in the face of those promoting orthodoxy. I am not saying we should dumb down the "rules" but we have to remember our own past to have some understanding of those that makes themselves their own "popes."

I totally agree about meeting people where they are with love. I think that some folks can go overboard with their love for orthodoxy - such as harshly criticizing those who aren't appreciative of the Latin Mass or any other point of orthodoxy.

I have to be careful because right now I'm on fire for TLM! I do believe that it is key to helping restore Catholicism to its roots. However, I know that many people would disagree with this. The main focus really should be on living our lives in faith an obedience to our Savior, Jesus Christ. If someone is doing that by loving the NO, then so be it and God bless 'em. If a new convert finds the NO more to their liking, then again, bless them.

I am starting to see some issues with the Sacrament of the Eucharist, but I'll take it one brick at a time. ;-)