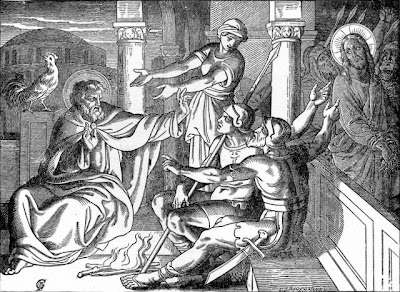 It didn't take long for God to test me.

Today has been a very emotional day. On one hand, I was able to meet with my father for the first time in almost three months to share with him face-to-face my decision to "come home" to the Catholic church. I excitedly shared with him my latest discoveries, the books I've found and also the many helpful internet sites. He was very happy and we fell into our usual conversation on church doctrine and current controversies. We even touched upon the topic of forgiveness.

Little did I know I would be required by God to give it to my father in a very short amount of time.

My father has either misplaced or thrown out something that was very, very precious to me. Something connected with my deceased mother and I immediately was thrown into a tizzy over it. This object was something I planned on retrieving on my next visit and he had assured me during our last visit months ago that he would keep it and promised not to throw anything away before consulting me.

The scenario was a perfect set-up by our Heavenly Father. He does this, you know. He will take whatever you hold near and dear and then ask you to lay it on the altar. To paraphrase Eleanor Roosevelt, the thing you think you cannot do is exactly what you cannot do - apart from the grace of God.

I heard, for instance, that Corrie Ten Boom was given the opportunity to extend forgiveness - in person, to one of the guards of the concentration camp where she had been imprisoned, and she did. The guard, stunned that someone who had suffered so much evil (and his part in it), was humbled beyond words. She said it was nothing less than the grace of God flowing through her. He eagerly accepted the grace as he poured out his heart, telling her he was now a believer in Christ. They embraced.

I thought of Peter as he denied Christ. I thought of Jesus Christ and how He must have felt when he heard the vehement denials by Peter. After all they had been through together and yet Peter did not want to be associated with Him.

Little did I realize I was prophesying to myself when I said this to my father regarding forgiveness:

"When people jump from church to church because they are offended, they are refusing Jesus' command to forgive. That offense is nothing less than the flesh's refusal to die. 'I have been crucified in Christ and it is no longer I who live...' When we insist on holding onto our grudges, we are in essence saying that the vindication of our flesh is of greater importance than obeying the words and example of Jesus Christ."

We must forgive if we are to be called children of God. There is no alternative.

And so I cried on the way home from my visit as I died to the flesh once again. I prayed the Rosary and asked Mary if she'd put in a good word for me and bestow grace. That which was so precious to me may be gone forever but the lesson perhaps was much more important.

His love for me and you is an everlasting love and He will do what it takes to remove any obstacles from receiving it - as long as we submit to His purification process. Amen and amen.
by Mary Rose at 10:59 PM

Corrie ten Boom - a true saint! Funny enough, when I returned to the Church I went to the public library to get some books on religion. I picked up some awful drek from supposedly Catholic authors and I also picked up her book "The Hiding Place" and a couple books from Catherine Marshall. These 2 protestant ladies brought me closer to the Catholic church than the dissident Catholic writers.