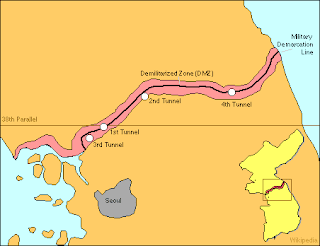 In 1991, my family was able to visit my brother and his family in Seoul, Korea for Christmas. My brother was serving in the Army and they had a special program to bring families together during the holiday. We had a wonderful tour of the country and had the opportunity to visit the DMZ, otherwise known as the Korean De-Militarized Zone.


The border between North and South Korea is approximately 2.5 miles long and is the heaviest armed border in the world. It is serious stuff. When we approached the area, my brother told us, "The most 'gung-ho' of the gung-ho in the Army serve here. They live, breathe, and sleep Army." After being there, I understood why. There is an agreement between the North and South that they may have their guards patrol within the DMZ but they cannot cross the MDL (Military Demarcation Line). We visited a building that housed meetings between the two countries, the Joint Security Area. This was considered neutral ground for the two governments although witness to many attempts by both to tangle in the brinkmanship that often occurs between warring factions.

Why bring up the DMZ? Because I am starting to see a relationship between the "warring factions" of our world and the need for a separation to enter into the Holy and Mysterious. I am realizing that there is a growing thirst for assigning the proper reverence to things that are Holy. There is a desire to acknowledge that Jesus Christ is more than the next "Feel Good Guy" but that He is God Incarnate, the Light of the World, the Living Sacrifice, and the Word Made Flesh.

After years of being involved with casual worship and even more casual teaching, I understand the desire. We live in a secular world and much of this humanistic secularism has crept into our churches. Within most churches, there is no acknowledgment of the Holy or Divine. I say this to not so much condemn these churches but to remind them that something very, very precious was lost. When we lose sight of the Holy and Divine, our spiritual eyes grow dim. When we cannot see the Truth of what God has given to us, we cannot consume and imbibe it. And when we cannot receive the Bread of Life, we starve our souls.

We need to eat but eat with understanding.

In light of some of the issues I've been studying with our Catholic faith, I am amazed (although I shouldn't be) by the yearning to return to a more traditional celebration of the Mass. Latin Mass has become popular again. (Who knew?) And now, taking communion while kneeling is is being seriously discussed.

On Fr. Z's site (yes, this man is definitely required reading for me), he says the following regarding kneeling for communion. I've added a few comments and emphasized parts I wholeheartedly agree with. His entire entry is so good that I hope I can find a more thorough exposition of it in other areas on his blog.

A note about Communion rails and definition of the liturgical space of a church.

St. Augustine of Hippo (+430) explained that Christ speaks in every word of Scripture. Sometime Christ is speaking with the voice of the Head of the Body which is the Church, sometimes He speaks as the Body. At times He speaks as Christus Totus, the Body with the Head, together.

This is a useful way to understand in a healthy way something about the outward expression of "active participation" during Holy Mass.

As we have said on WDTPRS a zillion times, true "active participation" begins with our baptism, which places a new character on our soul and makes us members of the Church. As John Paul II expressed in his letter on St. Augustine, the Church is not just Christ’s Mystical Body, it is Christ’s Mystical Person. (So much for the boring, impersonal modern-day architecture...)

Moreover, the true Actor of the sacred action of Holy Mass is Jesus Christ the High Priests, raising words and deeds to the Father. Sometimes He acts and speaks in the person of the alter Christus the priest (Head), sometimes in the words and actions of the congregation (Body), sometimes when the priest and people act and speak together (Christus totus). Christ makes our hands and voices His own in the sacred action, but He is the actor and speaker. (Alleluia! And if I may add, His Body is indeed "broken" when they come before Him. By His Sacrifice are we made whole.)

It may be that the Novus Ordo manifests this reality somewhat more clearly. The older form of Mass may demonstrate more clearly how the priest as the head of the liturgical body can himself alone speak for the whole.

However, the building of the church itself (which is a sacramental building, a sacred and consecrated place) also manifests this three-fold distinction. (Amen and amen. He beautifully explains why this is vital. If indeed there is a Holy Communion, a true divine exchange between the believer and Christ - then should it not be represented in a sacramental building?)

This was such a joy to read this morning! Very exciting!

It isn't so much a surprise to me to discover that more people want (or should I say demand?) a more serious approach to celebrating the Lord's Supper. I think people know instinctively that there needs to be a veil of separation, that there was a Holy of Holies. Who are we to say that because we now have computers and Lear jets, we don't need such things?

After deeper consideration of these issues, I daresay we need such things more than ever.
by Mary Rose at 10:42 AM

I recommend this book: For the Life of the World: Sacraments and Orthodoxy

It goes into the relationship of the faithful with the divine as worshippers at church and as people of the world. I suspect you'll like it.

Thank you so much, Josephus. If you weren't able to tell, I'm a huge bookworm.

Twenty-five years ago, there were very few Catholic books to feed my spiritual hunger. Now there are too many! I am relying on the new friends I make to recommend the good ones. I'll definitely put this one on my list.