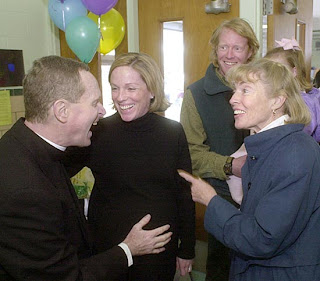 I know what Catholic Answers has to say about this oft-asked question. It was one of the first issues tackled when I was with a Christian college ministry and they felt they needed to rid some of us Catholics of our erroneous beliefs.

I've been giving this one a bit of thought. I admit when I met with the associate pastor of the parish I'm now attending, it felt weird to address someone as "Father" again. Is it offensive to God? What to do?

So I prayed about it and gave it over to Him. I think I received an answer last night.

In the Bible, some of the more influential, obedient men in the Old Testament are called "Fathers in the Faith." They were men who went through extraordinary experiences while their faith was tested and purified. Abraham and Moses were two such men.

I suddenly saw the priests as being "fathers in the faith." They, too, are imperfect and battling sin each day. But they have made a commitment to follow God with all of their heart, mind, soul, and strength. They have applied themselves to rigorous training in order to bear the awesome responsibility of leading believers in the faith. They deserve my respect and submission as long as it is not directly contradicting Scripture. (Canon Law is something I have to tackle another time. Baby steps, here...baby steps...)

I call a male believer in Christ "Brother" and a female believer, "Sister." We are a family. In a family, there are roles of authority. Would it not then to make sense to have "Fathers" and "Mothers?" Of course. At least this makes perfect sense to me.

I also thought about the attitude of the heart which Jesus confronted in Matthew 23:2-8. Jesus said:

"But they do all their deeds to be noticed by men; for they broaden their phylacteries and lengthen the tassels {of their garments.} They love the place of honor at banquets and the chief seats in the synagogues, and respectful greetings in the market places, and being called Rabbi by men." (Matt. 23: 5-7)

If that is the definition of someone who is addressed by the name "Father," then I can tell you in all certainty there are plenty of Protestant and non-denominational leaders who have this exact attitude when dealing with people. They demand an acquiescence from those around them and I've personally seen some carry the "Do-You-Know-Who-I-Am?" card and flash it as often as possible. I know this is not what our Lord is desiring in His followers.

So although some non-Catholic pastors may criticize the Catholic faith for having "Fathers" and such, I do not see much of a difference in the way they act, either.

I have seen some priests act more egocentric than Madonna. But I've also known plenty who have been humble and contrite before God, taking seriously their vocation. I know there are plenty of Fr. Jim's in the world.
by Mary Rose at 5:30 PM

Email ThisBlogThis!Share to TwitterShare to FacebookShare to Pinterest
Labels: Questions About Catholicism